What's the mark of a good long-term car? Simple: the number of people who ask to borrow it. Ever since the Volvo V50 arrived last July, I've been inundated with requests - so what is it about the sensible Swede that creates a clamour for its keys? 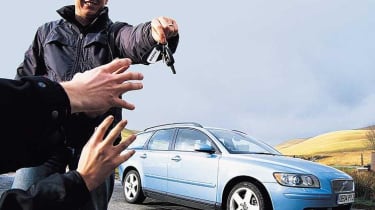 Well, for starters, it isn't that sensible - ours is the T5 turbocharged model, and with 220bhp it doesn't exactly hang around. Secondly, it's an estate, capable of coping easily with runs to the DIY store, and will even hold an entire mountain bike! Lastly, and most surprisingly, it's incredibly stylish - Volvo makes estates look cool, and the V50 is still rare enough to turn heads. Of course, all this means I've been reluctant to relinquish the keys. However, I'm not blind to the V50's faults - and over the past few months, the picture hasn't been as rosy as it was initially. The biggest shock came in December when the Volvo reached its 12,000-mile first service interval. I phoned round some dealers to get a quote - then a few more to make sure I had heard correctly. The best price I got was a massive £300 plus VAT. To put that into perspective, the same tune-up on the XC90 off-roader we ran last year cost only £253 - and don't forget that the V50 is based on a humble Ford Focus! Once we'd recovered, the car was booked into Squire Furneaux in High Wycombe, Bucks. It was a lengthy job, taking three-and-a-half hours, but to be fair the garage did the work for less than the original quote. It charged us £283 - although £52.20 on oil sounded a bit steep. If only that was the extent of our outlay. We also had to cough up when a stray pheasant picked the wrong moment to cross a dark country lane, and sacrificed itself against the nearside foglight. Cue another gasp of amazement at the £114 for parts and fitting. This was because the entire lamp unit had to be replaced, rather than just the lens cover. Adding insult to injury, a mystery car park ding has appeared on the rear passenger door. Given all this, it's frustrating that Volvo has recently announced it's following BMW by offering an optional service package. Costing a mere £100, it provides cover for three years or 36,000 miles and takes the sting out of running costs. Still, apart from our regular trips to the garage, OE04 PYJ has been painless on the wallet. Economy has dropped off since our last update (Issue 831), but our 26.5mpg average over 14,500 miles is good for a 220bhp estate that covers 0-60mph in less than seven seconds. The 78.7 pence per mile overall cost rating is impressive, too. However, we're not so convinced about the car's quality - and we think this might have something to do with the fact it has so much in common with the Focus. Two things are particularly frustrating: the gearbox and wind noise. Early on, we praised the V50's six-speed manual transmission, but lately it's proved increasingly reluctant to engage reverse when cold - you have to roll the car forward before it can be moved backwards. Even then, you can feel the linkages flexing as you move the lever. If it gets worse, we'll take the Volvo back to the dealer. The same applies to the seals around the front doors. They started to make a whistling sound immediately after the service, but then quickly cured themselves. However, lately the noise has come back with a vengeance, spoiling high-speed refinement. As we've mentioned in previous reports, the ride isn't the best, either. It remains jittery, and on bumpy roads the car struggles to get power down through the front wheels. The handling still feels agile and rapid, but not actually very composed. Even these downsides haven't dimmed my enthusiasm for the Volvo, though. I love the estate's interior design and comfort, as well as its exclusivity and turbocharged power. And its size suits my family, too - although that will be put to the test when our second child arrives in six weeks. I'm not as enamoured with the V50 as I was a few months ago because of its little niggles. But all-round, I still rate the car very highly - and am glad so many staff members do, too.