There have been two major surprises to running the V50 for the past eight months and 17,000 miles. Firstly, it's proved more practical than many in the office believed possible, and secondly, we've met an unexpected mechanical fault. 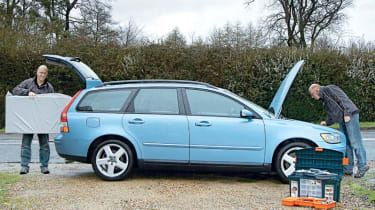 There have been two major surprises to running the V50 for the past eight months and 17,000 miles. Firstly, it's proved more practical than many in the office believed possible, and secondly, we've met an unexpected mechanical fault. To begin with, let's deal with the Volvo's versatility. Recent load-carrying exploits include a 42-inch plasma TV screen and a 210cm wardrobe. But most impressively of all, it shifted an entire home office (desk, cupboard, chair and filing cabinet) in one go. Mind you, the desktop went on the roof - yet another reason we're glad we specified easy-to-fit roof bars. On the move, I could peer through the glass sunroof to keep an eye on the load. The V50's boot isn't actually that big - at 417 litres with the seats up, many rivals have more room - but the hold is well designed. From the reversible boot mat to the fold-flat front passenger seat, it takes everything in its stride. If only the same could be said of the passenger space. While rear legroom isn't great, the most common moan is that the back electric windows don't drop far enough. However, with the V50 mostly being used for daily solo commutes, we were more worried about the gearbox. You may remember that in our last report (Issue 844), we complained that first and reverse were impossible to select at start-up. As a result, the car was booked under warranty into Squire Furneaux in High Wycombe, Bucks, which diagnosed a one-off clutch fault - it wasn't decoupling properly. Unfortunately, the garage couldn't get a centre plate in the UK and delivery would have taken a couple of weeks. So to the dealer's credit, it got a complete new clutch from a Volvo outlet in Daventry, Northants. The whole process took three days, and the service centre kept us well informed. However, the transition to the new clutch hasn't been smooth. Fifth and sixth slots in the H-gate have moved, and both are now much closer to the third/fourth plane. This means changing from fourth to fifth requires considerable practice. There's nothing wrong with the engine, though, as the 2.5-litre 220bhp turbo is still delivering strong performance. With all that power going to the front wheels, you might expect a lot of tyre wear, but we're still on our first set and they're in reasonable condition. However, the traction control light flickers more frequently when pulling away. Economy hasn't quite fulfilled its early promise. Initially, the V50 regularly topped 28mpg, but it now gives 26mpg. This could be down to fewer long journeys recently - on motorways it happily returns 32mpg. However, I still think the V50 is a handsome and capable estate, and despite the gearbox fault, it's great value and genuinely enjoyable.Second Opinion I drove the V50 during February's cold snap of freezing temperatures. What impressed me most was the car's climate control - not only does the cabin warm up quickly, but the seat heaters work efficiently, too. You can tell it was designed to cope with Scandinavian winters. Also, as with our Skoda Fabia vRS, I love the understated and accessible performance - it's quick away from the lights. Pete Gibson, staff photographer