Just two weeks ago, we named the brilliant new S40 saloon as the finest compact Volvo ever. Its combination of crisp styling, dynamic handling and value for money made it one of the most impressive and significant new models in years. 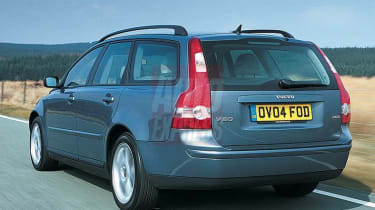 For the first time ever, a compact Volvo range has the potential to be truly class leading. The V50's combination of value, great build and driving pleasure adds to the appeal of the S40. If the firm carries on like this, Dalar� won't be the only place awash with Volvos.

Just two weeks ago, we named the brilliant new S40 saloon as the finest compact Volvo ever. Its combination of crisp styling, dynamic handling and value for money made it one of the most impressive and significant new models in years.

But good as it is, it's already been superseded. The residents of 'Volvo village' Dalar� - as featured in the company's TV ads - obviously expressed concern about having no way of collecting this year's Christmas tree... because the manufacturer has now given us an estate model!

This is the first time we've driven the new V50 in the UK, and it builds on the S40's already impressive attributes. The car is identical to the four-door as far back as the B-pillars, from where it morphs into a stylish estate. Compared to Volvo's larger load-lugger, the V70, the V50 looks less aggressive at the rear. The roof slopes gently backwards and the tailgate has more of a curve, while the lamp clusters echo the family design first seen on the XC90 4x4. It works well, and the standard roof rails add to the upmarket look.

Inside, the V50 shares the S40's dash, complete with trademark 'floating' centre console. The cabin layout is exceptional and it has an excellent quality feel, while as with all Volvos the seats are extremely comfortable.

However, the front door bins are too short and narrow, and struggle to hold much more than two CDs. And although that centre console is stylish, it sits too far forward, so you can accidentally knock the ventilation or stereo controls while changing gear.

There's no shortage of storage at the other end of the car, though. Volvo has a reputation for making fine estate cars, and the V50 is no exception. It will hold up to 1,307 litres of luggage with the seats folded, and the boot opening is huge. What's more, there are clever touches such as a modular stowage system to stop small items sliding around and an umbrella holder. The car we drove had the 136bhp 2.0-litre diesel engine which is also found in the Ford Focus C-MAX. It's a refined and responsive unit with excellent mid-range performance, while the gearshift is smooth and positive.

And as with the S40, the V50 is one of the best handling Volvos ever. It sits on the next-generation Ford Focus platform, which offers tremendous grip and precision, and delivers an exceptional ride that has the feel of a much bigger car. The steering isn't brilliantly sharp, but it's well weighted and accurate.

However, perhaps the V50's biggest attraction is its price. It might be slightly smaller than rivals such as the Audi A4, Jaguar X-Type and BMW 320d, but the Volvo offers a similar amount of load and interior space and much more kit. The 2.0D SE driven here comes with leather, cruise control and a six-CD changer as standard, all of which would be cost options on its already more expensive competitors.