Ahh, moving house. One of life's great pleasures, in my book right up there with unblocking foul-smelling drains and painting acres of skirting board with white gloss. Which is ironic, because I have done all three in the past few weeks... 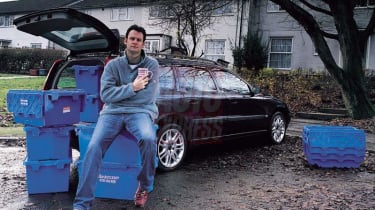 Ahh, moving house. One of life's great pleasures, in my book right up there with unblocking foul-smelling drains and painting acres of skirting board with white gloss. Which is ironic, because I have done all three in the past few weeks... But if you're going to shift the family's collected junk 15 miles up the road, you might as well do it in a car with maximum load space. And as you can see, our Volvo V70 came in rather handy for multiple journeys lugging all our gear. The car is a bi-fuel, so it has two tanks - one for unleaded and another for liquefied petroleum gas (LPG). It's been doing most of its miles on LPG, and has proved very cost-effective. In the past six months, I've used more than 1,200 litres of LPG and only 250 of unleaded, and as the former is about half the price of the latter, I've saved close to £500. The car's green credentials mean we haven't had to pay London's congestion charge, either. However, the money hasn't gone straight into my pocket. This car isn't very fuel efficient; Volvo's own figures say a standard 2.4-litre V70 should do at least 30mpg, but on the Bi-Fuel that figure is down to 23. Over the 6,500 miles put on the clock since June, it's been only 20mpg. There's more bad news if you're considering an LPG model. Availability of the gas is an issue, and while 1,400 sites across the country sounds a lot, when it comes to finding one it's not. To be fair, the number has risen by 100 in the six months the car has been on our fleet (to find your nearest site, visit www.powershift.org.uk), but tracking one down when you're on the road can be a bind. Also, the filling stations that do sell the eco-friendly fuel regularly seem to run out or have a problem with the pump, so it can't be used. Nearly a dozen times I've been told I can't fill up - and two of those were at consecutive motorway service station forecourts I visited in one trip along the M4, which proved extremely frustrating. Another annoyance was that, for some reason, the Volvo's LPG tank would often fill only to the three-quarters mark. It's happened numerous times at different forecourts, and I can only conclude it was a problem with the V70's system. I made the maker aware of my concerns, and it told me this wasn't something it had experienced before. The Government's continuing policy of underfunding road maintenance took its toll on the car as well. One of my colleagues was travelling along at around 50mph and thought the steering felt odd. He stopped to discover a large bulge in the front offside tyre wall, the size of a tennis ball. After limping the short distance home, Kwik Fit was called to fix the problem. An engineer came out later the same day and completed the job in 20 minutes, although at £133.99 it wasn't cheap. He said it looked like a pothole injury. But aside from the dreadful turning circle and the sluggish performance of the 2.4-litre engine and auto box, everything else about the V70 has been positive. It's been reliable, a capable motorway cruiser and a valued workhorse for all sorts of large loads. In SE trim, the leather seats are supportive and comfortable, and the cabin is well laid out. With the rear seats folded flat, there's acres of space, and it's carried everything from a chest of drawers to a washing machine during our domestic upheaval. So it's with some sadness that I'm saying goodbye to the V70, which will shortly return to Volvo HQ. It's served me well and, as my first attempt at running a car on LPG, has been an interesting - although not always positive - experience.