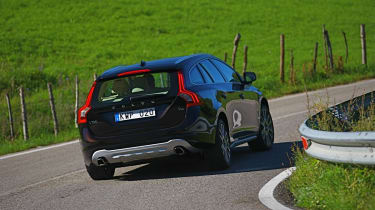 The new petrol engine is impressive, but it’s difficult to recommend over diesel versions of the new V60 – especially given that the car is much better suited to long-distance cruising than pushing on along B-roads. If you’re unconcerned with ultimate load-carrying, the Volvo is a stylish lifestyle choice. However, buyers who need carrying space and flexibility would be advised to look elsewhere.

It's the Volvo estate that’s really a four-door coupé. That’s what bosses told us when we drove the diesel version of the all-new V60 in Issue 1,130 – and now, we’ve got behind the wheel ofthe top-spec petrol model, the T4. Is it just as good?

As we said in our previous report, the load-carrying variant of the S60 focuses more on style than practicality. With the back seats in place, it has 430 litres of luggage space – that’s 50 litres less than in Skoda’s Fabia estate.

Still, at the touch of a button, the rear bench splits 40/20/40, and owners can drop the front passenger seatback if they need to squeeze in longer loads. Plus, what you lose in load capacity, you gain in rear seat room – occupants have more space than in Audi and BMW rivals.

The interior is identical to the S60’s, matching premium rivals for fit and finish, and the controls are uncomplicated. Volvo claims the car is aimed at young drivers, but it doesn’t take long behind the wheel to realise the focus is on comfort. The suspension does a great job of smoothing bumps in the road, while road and wind noise are suppressed well.

Cruising is the V60’s strength – so it’s little wonder that around 85 per cent of models will be sold with diesels under the bonnet. But buyers shouldn’t ignore the petrol options. The new 1.6-litre four-cylinder turbo engine comes in 148bhp T3 and 178bhp T4 forms, and the latter is available with a six-speed auto box. Given the vague shift of the manual in the diesel, this is preferable.

The T4 delivers its 240Nm of torque from 1,500-4,000rpm, with an overboost to 270Nm, so it feels more muscular than its capacity suggests. But while the auto works well when unhurried, if you press on, the revs rise noisily and it gets flustered. The V60 isn’t a car that you will want to rush, as the oddly weighted steering doesn’t offer the feel or feedback that BMW, Mercedes and Audi owners are used to. Plus, while the car grips well, there’s not much fun to be had along twisty roads.

Then again, strong comfort and refinement make the V60 a fine long-distance proposition. Volvo’s emphasis on safety is also a draw. Every model comes with the City Safety set-up, which can prevent rear-end collisions at speeds of up to 18mph.

If you’re sold on the coupé styling, this Volvo is worth the £1,000-£1,500 premium over the S60 saloon. But if you really need a spacious estate, there are much better alternatives.