UK motorists have to keep a watchful eye out for pheasants, foxes and hedgehogs but over in Australia the moving road obstacles are much larger and more formidable. That's why Volvo is developing a 'kangaroo detection' system to help prevent one of the biggest causes of car collisions on the country's roads.

According to figures released by the Australian National Roads & Motorists Association (NRMA), there are over 20,000 kangaroo strikes on Australian roads each year, causing $75million worth of insurance claims. Given the size and weight of the marsupial, there's also a high amount of serious injuries and fatalities caused to car occupants as well as to the animals themselves.

To address the problem Volvo is using a fleet of new XC90 models to trial software specifically to detect and avoid kangaroos. It utilizes Volvo's existing camera and radar tech for collision avoidance, but is adapted for high speed driving. It's not as simple as you might think, however, as Safety Engineer Martin Magnusson explains. 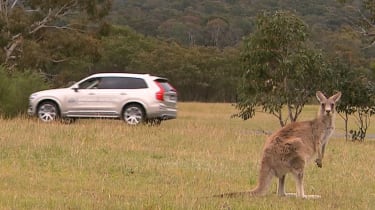 “In Sweden we have done research involving larger, slower moving animals like moose, reindeer and cows which are a serious threat on our roads. Kangaroos are smaller than these animals but their behaviour is more erratic. This is why it’s important that we test and calibrate our technology on real kangaroos in their natural environment.”

The Volvo kangaroo trials are being conducted in a nature reserve in Canberra, one of the country's hotspots for kangaroo strikes. Once the technology is perfected, expect to see updated Volvo collision avoidance systems rolled-out globally to help avoid collisions with local wildlife.

What do you think of Volvo's efforts to protect Kangaroos and other wildlife from car accidents? Let us know in the comments section below...