Special edition Abarth 124 GT debuts at 2018 Geneva Motor Show, ahead of going on sale in the UK this summer 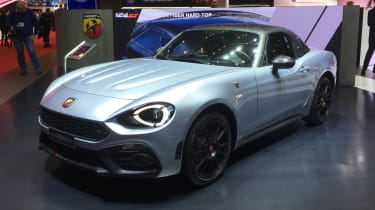 Called the Abarth 124 GT, it has a new roof made from carbon fibre that weighs in at 16kg, while Abarth claims that it improves the overall torsional rigidity of the car as well. Finished in naked carbon, it’s lined inside and features a defrosting system for the rear window, too.

Alongside the new roof the 124 GT rides on 17-inch OZ alloy wheels, which are finished in black and are 3kg lighter than the wheels on the standard car. Elsewhere, the mirror caps can be finished with a naked carbon fibre effect, red or a unique gunmetal grey. 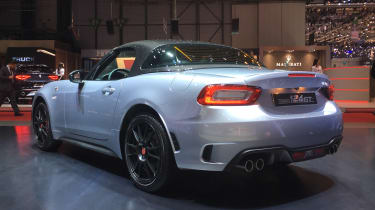 The bonnet can be finished in matt black, and a carbon fibre rear lip spoiler is also available. The paint finish on the bodywork is a unique shade called Alpi Orientali Grey.

Mechanically there are no new additions. Under the bonnet sits a 1.4-litre four-cylinder turbocharged engine producing 168bhp and 250Nm of torque, enabling a top speed of 144mph and 0-62mph in 6.8 seconds. The ‘Record Monza’ sports exhaust system is equipped as standard, while both six-speed manual and six-speed automatic versions of the 124 GT will be available.

UK prices have yet to be revealed, but it’ll be sure to carry a premium over the £29,620 price tag of the standard Abarth 124 Spider when it arrives on sale in the UK just before summer.

Welcome to our Geneva Motor Show hub page, scroll down for all our Geneva content...
Used Fiat 124 Spider review 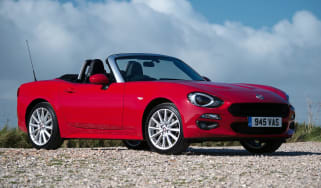