The Abarth 124 roadster left us a little cold with an auto box, but it's a different story with the superb manual version 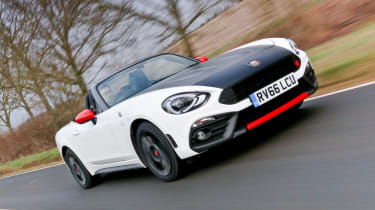 The Mazda MX-5 on which the new 124 Spider is based has a carefully balanced formula for top-down driving fun, and it would have been all too easy for Abarth to upset this. But the roadster takes what makes the Mazda (and its Fiat donor car) great, and builds on it. In fact, it’s arguably the best ‘MX-5’ yet. It comes at a cost, though, with prices starting at an eye-watering £29,565. That makes the Abarth nearly £6,000 more than the equivalent MX-5.

Driving enthusiasts have long cried out for a more powerful version of Mazda’s MX-5 sports car, but it’s taken the Italian engineers at Abarth to finally produce one.

We love the standard Fiat 124 Spider – so much so that it beat its MX-5 sister car when we tested them against each other. But when we drove the faster Abarth version in Italy, the clunky automatic gearbox left us wanting. Now, we’ve got a manual model in the UK to decide whether the most powerful ‘MX-5’ is in fact the best ‘MX-5’. 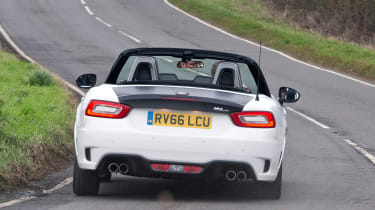 Initial signs are good. Where Fiat’s standard 124 can look a little awkward from some angles, the Abarth improves on every glance. The matt black bonnet and bootlid – part of the zero-cost Heritage Look pack – are a nod to classic Abarth rally cars, and the 17-inch wheels fill the arches far better than those on the regular Fiat.

The stylised red towing eye cover is another neat detail, which matches bright red accents on the front splitter and wing mirror housings. Tick the right option box and you can also have red centres for the standard leather sports seats. Our test car didn’t have this option and it left the cabin feeling a little gloomy – but it’s hard to knock the quality of the Mazda-sourced parts. The Abarth gets a chunkier steering wheel rim, stubbier gearlever and Alcantara-trimmed dash and centre console inserts for a welcome lift.

The driving position is good, too. Taller drivers may find the cabin a little cramped and wish for a way of lowering the seatbase, but you get an evocative view down the long bonnet – something that is lacking on its Mazda sibling. The red, central rev counter is an exciting statement of intent, and once settled you’ll find the pedals ideally placed for rev-matching heel-and-toe gearshifts. 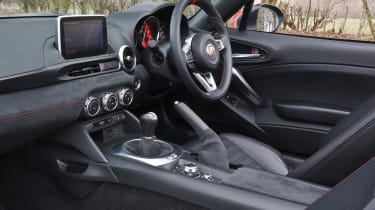 Press the starter button and the Abarth immediately differentiates itself from its Japanese cousin. The 1.4-litre turbocharged four-cylinder engine fires up with a growl through the Record Monza exhaust, much like it does in the Abarth 595 hot hatch. Prod the throttle and the revs rise quickly, and there’s an amusing parp from the exhaust.

But as in the Mazda, a light clutch and precise gearshift mean it’s as easy to drive as a supermini. A Sport mode slightly increases steering weight and sharpens low-rev throttle response, although the differences aren’t as pronounced as in some of the Abarth’s more conventional rivals.

Further differences begin to surface once on the move. The structure instantly feels a little more rigid than the occasionally wobbly Mazda’s, but low-rev throttle response isn’t quite as sharp due to the lag produced from the turbocharged motor. You’ll need more than 2,000rpm before the fun starts (peak torque comes in at 2,500rpm), although from that point the 124 really gets into its stride.

Acceleration is always accompanied by the sports exhaust’s aggressive blare, and the mid-range thrust definitely feels stronger than that of the naturally aspirated 2.0-litre Mazda. Peak power is developed at 5,500rpm, but there’s little point exploring that far – and anyway, you’ll enjoy snicking between the ratios too much to spend long in any one gear. It’s infinitely better than the frustrating six-speed auto we tried previously. 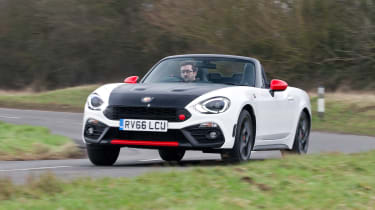 That rigid body means roll isn’t as obvious in the Abarth as in the MX-5, so cornering is even more satisfying. There’s still a shortage of steering feel, which adds a layer of uncertainty to your inputs, but the low, lightweight 124 always has a little more grip than you’re expecting and you quickly become used to the steering’s rate of response. The brakes are strong and inspire confidence, too.

Once you’re keyed in to the Spider’s ways, you’ll have a lot of fun. The MX-5’s sweetly balanced chassis is still present and correct, but the extra torque means it’s even more exploitable. You’ll quickly start to push harder, get on the throttle earlier and feel the chassis moving around beneath you. Standard stability and traction control prevent things getting out of hand, but even with these safety nets switched off – at the touch of a button – the Abarth 124 is never intimidating. Sweetly balanced slides are there for the taking, and easy to catch with the quick steering, but the real skill is that the car feels fun to drive even at low speeds.

Space and versatility remain unchanged, with a small 140-litre boot leaving room for a couple of squashy bags but little else. Cabin storage is also limited – but few people will buy a two-seat roadster for its practicality. Climb behind the wheel and you’ll quickly realise exactly what the Abarth is all about.