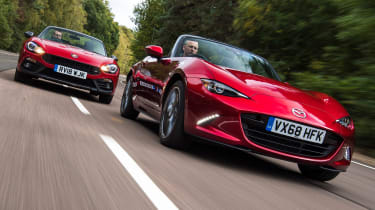 Mazda is forging ahead this year with a series of range updates, and each of the brand’s models remains competitive and desirable in its own way. But there’s one Mazda that was still at the top of its game even before 2018’s improvements: the MX-5.

It is the reigning champion in the roadster category at our New Car Awards, so is the Japanese convertible now even more appealing with the addition of a new engine variant to the range?

To find out we’ve brought along its closest rival, the Abarth 124 Spider. This souped-up version of Fiat’s convertible matches the increased power and performance of the Mazda’s tweaked engine. Which of these exciting drop-tops comes out in front? 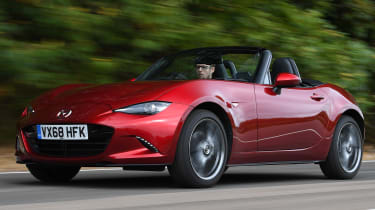 For: Fun to drive, great value for money, engine is strongAgainst: Cramped interior, not a very practical choice

The latest version of the Mazda MX-5 is no different externally to the pre-facelift model, but there was nothing wrong with the handsome looks of the little roadster, so the manufacturer has stuck to altering what was really needed for this update.

Those changes centre on the 2.0-litre four-cylinder engine, which is now more powerful (at 181bhp) and has a higher red line than before. There’s more kit, including autonomous emergency braking, traffic sign recognition and a reach-adjustable steering wheel. Even Android Auto and Apple CarPlay are available, although they cost £350. In Sport Nav+ trim tested here, the 2.0 roadster is priced at £24,795.

The Mazda MX-5 is Britain’s best-selling roadster, and has been around for nearly 30 years. Even over that period, it’s always been one of the finest cars in its class. That’s because it has stayed true to its roots, which are fundamental to its brilliance. It’s small, good value and, above all, great fun to drive. That hasn’t changed one bit with this latest version, and in fact this new 2.0-litre model is more thrilling than ever. 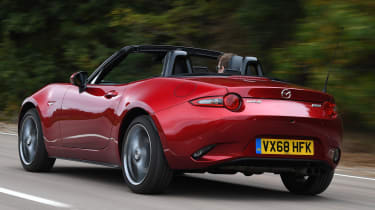 This is because there’s more power than before, up to 181bhp, thanks to a larger intake manifold, increased injection pressure and a new exhaust system. But it’s not just the extra grunt that adds to the fun; it’s the way the MX-5 delivers it. Thanks to a red line that’s 700rpm higher than before, at 7,500rpm, the engine is much keener and sounds better when revved.

The Abarth shares much of the Mazda’s handling prowess, but it does miss out on the zingy and exciting engine, because the 124’s turbocharged unit isn’t as much fun to exploit. But it’s not just the performance that makes the Mazda fun; in fact it’s only a small part of the whole package, although it was half a second faster than its rival from 0-60mph in our tests.

The steering is precise and well weighted, the pedals and gearlever are positioned perfectly for satisfying up and downshifts, and the chassis is a masterclass in driving entertainment.

Turn into a corner and you can feel the front tyres bite, and once you get on the power the diff helps tighten your line and gives a great sense of agility. It feels friendly and benign, but always exciting. There’s a little roll in the suspension in faster corners, even on our Sport Nav+ model with its stiffer set-up and Bilstein dampers. But it’s not disconcerting; it just adds to the car’s enjoyable handling at normal speeds. 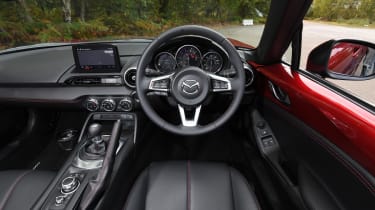 The beauty of the way the Mazda drives is that it’s fun no matter where you are or what you’re doing. Even a trip to the shops is great, because you can enjoy the close-to-perfect gearshift, lively engine noise and the wind in your hair when the weather is good. On both of these models you can flip the canvas roof down manually in a matter of seconds.

There’s not much to split the two inside, because so much of the Mazda’s cabin is carried over into the closely-related 124. The MX-5 now gets the option of Android Auto and Apple CarPlay as a £350 dealer-fit extra, along with AEB and traffic sign recognition. These items are missing from the 124 Spider.

Steering: The wheel now adjusts for reach as well as height, which improves the driving position and comfortInfotainment: Android Auto and Apple CarPlay are a £350 dealer-fit option, but we weren’t able to test this systemVisibility: You sit low down in the Mazda’s cabin, which means there’s a great sensation of speed even when driving normally. But visibility is still good and the small dimensions ensure the MX-5 is easy to park 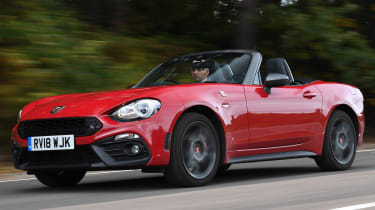 While the flamboyant Italian styling marks the Abarth 124 Spider out, it actually uses the Mazda MX-5 as its basis. This is immediately obvious once you get inside, where the interior and infotainment system are virtually identical, and only a handful of trim pieces and the seats differ from the Japanese model.

But the Abarth goes its own way under the bonnet. It uses a turbocharged engine, unlike the Mazda’s naturally aspirated unit. Still, with the latest updates to the MX-5, the Abarth’s 168bhp output now falls behind its rival’s. There are fewer trim choices and only one engine, while it’s pricier, too. Our test car starts at £29,625.

In Abarth form, the 124 Spider is only available in one trim level, although you can choose a more outlandish ‘Heritage Look’ model – with a black bonnet – for the same price as the standard car. There is also the option of the 138bhp Fiat 124 Spider, which looks similar to the Abarth, but is set up differently and has a less potent 1.4-litre turbo engine. 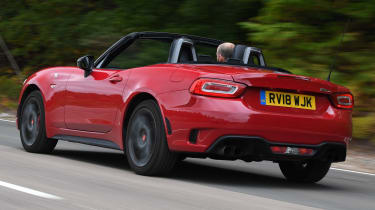 The Abarth’s maximum of 250Nm of torque is 45Nm up on the Mazda’s, and it’s produced lower in the rev range, so the Spider’s in-gear times were also consistently faster than its rival’s: the 124 needed 2.8 seconds to go from 30-50mph in third, while the MX-5 took 3.4 seconds. From 50-70mph in top gear, the Abarth’s 6.5-second time was significantly quicker than the Mazda’s 9.3 seconds.

It’s not all about the performance, of course, because the Abarth’s shared architecture with the MX-5 means it handles well, too. Some of the best attributes of the Mazda, including the involving rear-drive handling, are still present in the Spider. However, it does roll a lot more.

Its engine also dominates the driving experience in a different way to the Mazda’s. While the MX-5’s smooth naturally aspirated motor revs sweetly, the Abarth’s turbo unit relies on its strong torque to make progress. That means you don’t have to rev it as hard, which some people will prefer, but as a result it’s not as rewarding. It does sound entertaining, though, gargling through the sporty exhaust system. 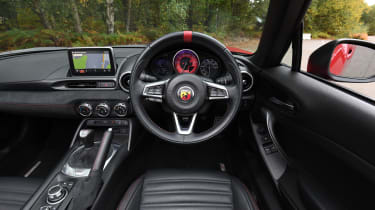 As with its rival, its suspension has a very low kerbweight to contend with, so only the worst roads are uncomfortable and the 124 doesn’t crash into most potholes. Still, like the Mazda, it does bobble around a bit on the move.

Much of the interior is the same as the MX-5’s, so there’s not a huge amount between them and it will come down to which is the better value; to which the answer is definitely the cheaper, better-equipped Mazda. But for some people, the Abarth’s fruity exhaust, sporty looks and Italian badge will definitely hold plenty of appeal.

Dashboard: Slightly different materials, seats and inserts mark the Abarth out from its rival here, but it’s largely the same cabin design, if a bit sportierInfotainment: Seven-inch touchscreen is a good size in such a small cabin, and the rotary control means it’s easy enough to useSeats: Sports seats are unique to the Abarth version; they’re comfortable and look good 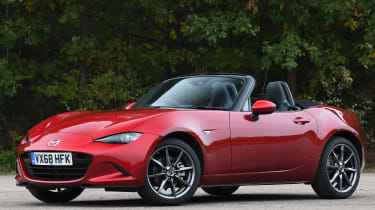 If we had a criticism of the previous MX-5, it was that the 2.0-litre engine was slightly underwhelming. Mazda has solved that with this exciting new unit. It remains at the top of its class and one of the best drivers’ cars you can buy today, especially at this price point. 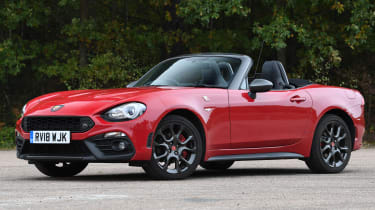 The Abarth is fun to drive, but it’s expensive next to its rival. Its turbo engine isn’t as fun as the MX-5’s revvy unit, nor as powerful, and the Italian car’s loud styling and exhaust won’t be for everyone. It will appeal to some, but it’s too pricey to beat the Mazda.