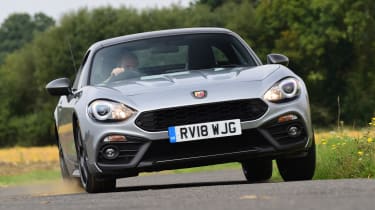 The Abarth 124 GT is a brilliant sports car. However, when the mechanically similar - but faster - Mazda MX-5 costs over £11,000 less, you’ll need to be a seriously hardcore Abarth fan to justify one over its Japanese cousin.

There’s a new range-topping version of the Abarth 124. The GT is limited to just 50 units in the UK, and the most striking thing that sets it apart from the regular model is its hard top roof.

The new carbon fibre lid weighs just 16kg, and Abarth claims that it adds a little structural rigidity to the open-top chassis – and more body control as a result. It houses a heated glass rear screen too which, being wider than the one you get with the standard fabric hood, makes the GT easier to see out of. The roof is removable, so if you still want to enjoy open air thrills, it’s just a few screws (and a cleared space in the garage) away.

While the extra mass might seem like a bad thing in a car that weighs little over a tonne, it’s entirely offset by the GT’s next most eye-catching feature. The 17-inch OZ Ultraleggera wheels each weigh 4kg less than the 124’s standard rims and, combined with the roof, give the GT the look of a mini road-going racer.

But does it feel like one? Well, much like the standard version of the Abarth 124, the GT is a firmer take on the Mazda MX-5 with which it was co-developed, and it rolls less through the corners as a result. It does break away more sharply when the limits of grip are reached, but it’s still entirely predictable and reassuring. Most importantly, it’s still huge fun.

The steering could do with a little more feedback, but the rack itself is weighted nicely and feels wonderfully accurate. Does the roof’s rigidity make it feel more precise? Not by a drastic amount, though the amount of vibration (or lack thereof) through the rear view mirror proves that it has banished some of the synonymous convertible scuttle shake. 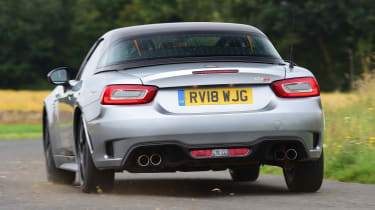 The ride, though firmer than the MX-5, never feels uncomfortable, and the drop in unsprung weight brought about by those wheels has improved things ever so slightly. The Brembo brakes are powerful and confidence-inspiring under foot.

The engine is unchanged from the regular Abarth 124, so there’s 168bhp to play with from the a 1.4-litre turbo engine. It’s at its best in the mid-range - there isn’t a huge incentive to rev it to the red line as you would in the Mazda, and the engine feels tardy when it’s off boost.

However, it’ll crack 0-62mph in under seven seconds, and 45mpg real-world fuel economy is entirely achievable. It’s mated to a wonderful six speed gearbox, and pedals which are well positioned for heel-and-toe downshifts.

And a quick blip of the throttle will be all too tempting thanks to the ‘Record Monza’ exhaust. The quad tailpipes produce a wonderful gargle at low speeds, developing into an angry rasp towards the top end. It’s just a shame that, because of the roof, it isn’t quite as enjoyable as it is in the standard car. 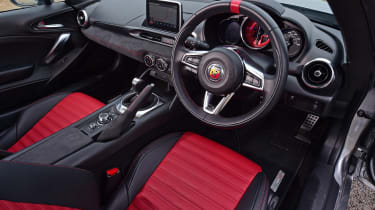 That’s compounded by the fact that the hard top – like the tin-top in the MX-5 RF – seems to produce more wind noise than the fabric hood at motorway speeds. At least you get a Bose sound system (a £795 option on the normal 124) to drown it out.