Mazda has launched another special edition MX-5, adding extra style to one of the best sports cars around 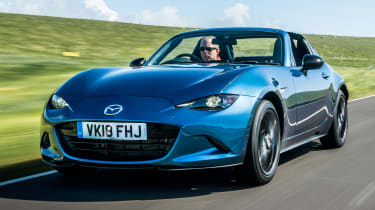 Another day, another special edition Mazda MX-5. The RF Sport Black adds appealing extra kit, but other models in the range continue to offer better value for money. That’s not to say this limited-run RF would be a foolish purchase – it’s still one of the most engaging sports cars money can buy, and the glossy trinkets add an extra dose of style.

It’s barely two months since we last drove and wrote about a special edition Mazda MX-5. Not deterred, the firm has launched another kit-laden, limited-run roadster: the MX-5 RF Sport Black.

Following the soft-top MX-5 Z Sport, the Sport Black is an iteration of the hard-top RF. Unike the Sport Nav-based Z Sport, however, this version builds on the entry-level SE-L Nav car. It is only available with the 158bhp 2.0-litre petrol engine, and adds darkened detailing and standard Eternal Blue Mica paint – normally a £550 option.

It certainly looks the part. The MX-5 was always a stylish sports car, but the gunmetal wheels, black boot spoiler and gloss door mirrors give it even more attitude. Inside, there’s a small plaque on the dash, unique floor mats and special scuff plates, as well as leather seats, automatic lights and rain sensing wipers. 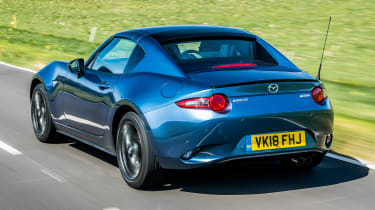 Mazda has made no changes to the way the car drives, although in the transition from SE-L to Sport Black, it has added the Sport Nav car’s limited-slip differential. It steers as sweetly as ever, while the raspy four-cylinder engine pulls strongly and with plenty of character. While the soft suspension means there’s a fair amount of roll, it’s beautifully communicative and huge fun.

The 0-62mph dash takes 7.3 seconds. While that may not sound that fast alongside turbocharged hot hatchbacks, the MX-5’s rear-driven chassis and low-slung driving position means you won’t miss the extra shove. The Sport Black trinkets can’t detract from what is an excellent two-seat roadster.

Like the SE-L Nav on which it based, the RF Sport Black can lower its lid in just 13 seconds. The targa-style body means it’s a bit blustery with the windows lowered, but keep them up and it’s a relatively refined experience. You’ll need to be stationary to drop or raise the roof, however.

Just 300 Sport Black cars will come to the UK, so if you want one you’ll need to act quickly. But before signing on the dotted line, it’s worth considering that for £1,900 less you could drive away in a well-specced SE-L Nav car. Or, for £26,195 (£600 more than the Sport Black) you can trade up to the excellent Sport Nav, which includes that magical diff, as well as keyless entry and a Bose stereo.