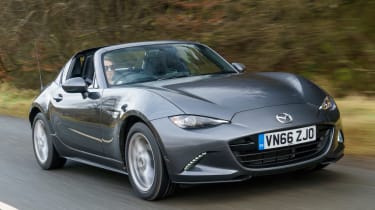 The Mazda MX-5 RF is a coupe-convertible derivative of the soft-top MX-5 roadster, and sports an electronically-operated folding hard-top in place of the roadster’s fabric roof. It’s designed to offer a little more all-weather practicality and refinement with the roof up, and also addresses potential security fears for owners who regularly park on the street.

While the MX-5 RF is identical to its roadster sister models up to the door tops, the coupe-style hard roof gives it an eye-catching style of its own. Big swoopy ‘flying buttresses’ are the distinctive feature, and as well as making the RF look a little more grown up, they provide a great bit of street theatre when you want to put the roof down. At speeds of up to 6mph, pressing the roof button raises the buttresses while the roof panel and main sloping rear window disappear discreetly beneath them. It’s fully automated, but the result is a more cocooned feeling than in the standard car, as the buttresses remain in situ along with a Perspex wind-deflector.

In other respects, the MX-5 RF is almost identical to the roadster models. Like them, it is available with two engines – 1.5 and 2.0-litre four-cylinder units. All cars come with a six-speed manual gearbox, though the bigger engine also comes with an automatic option. This is not available on the cabriolet. 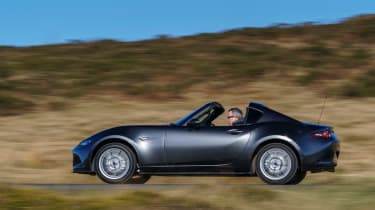 Direct rivals to the MX-5 RF are limited, with the obvious exception of the MX-5 itself. There’s also the Fiat 124 Spider – a rebadged version of the MX-5 – and a variety of hot hatches for similar money like the Ford Focus ST or Renault Megane RS. But if you really want a coupe, you soon stray into the realm of pricier models like the Audi TT, Toyota GT 86 or even the Porsche 718 Boxster.

The MX-5 RF is an eye-catching alternative to the popular soft-top MX-5 roadster that offers a bit more style and extra refinement on the road – with the roof up, at least. Roof down, those big flying buttresses cause intrusive noise at speed, but otherwise it’s as hard to fault the RF model as it is to criticise the roadster.

Larger drivers will find the MX-5’s cockpit a tight fit – as ever – and the extra weight in the RF comes with a marginal performance penalty. But you get the same engaging drive, affordability and practicality that make all MX-5s such great cars.

The MX-5 RF offers all the agility and fun of the roadster models, in spite of a small weight gain

The MX-5 RF’s convertible roof mechanism is heavier than the soft-top roadster’s –to the tune of around 45kg. The extra weight has a marginal effect on the car’s handling, as both the suspension and steering have been tweaked slightly by Mazda to cope. The slightly stiffer suspension in no way blunts driving enjoyment though. The chassis dynamics are similar to the MX-5 in that there’s quite a lot of initial body roll when cornering, but it’s agile, engaging and ultimately communicative in a way that few contemporaries can match.

With the roof up, the RF model offers a level of added refinement, which should attract owners who need to use their car for commuting or long motorway journeys. It’s not as quiet as an Audi TT, but it’s better than the standard car – especially in heavy rain.

However, it must be said that roof down motoring does not feel quite so charmed as in the roadster models, at least at higher speeds. That’s because the flying buttresses create a lot of wind noise, which makes conversation difficult at high speeds – although RF users who limit their open top experiences to pottering around town, or to twisty B-road fun, shouldn’t find it too much of a problem. 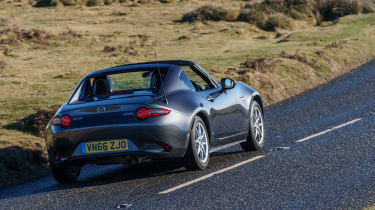 We prefer the smaller 1.5-engine in the regular MX-5, and it’s no different in the RF version. The 129bhp SkyActiv unit’s performance doesn’t feel quite so sparky with the extra weight of the RF model, but it’s still punchy enough and the lighter engine gives it a more agile feel. Those after more performance are better suited to the 2.0, however, which loses only a tenth of a second to its roadster sibling, making the 0-62mph sprint in 7.3 seconds. If you go for the 2.0-litre automatic option, the benchmark acceleration figure drops back to 8.4 seconds.

The MX-5 has always been an affordable sports car, and the RF version is no exception

The first thing to consider when looking at the MX-5 RF is the near-£2k price premium Mazda demands over the MX-5 roadster. It seems reasonable for the additional features in purely objective terms, but whether it adds up to real value depends on how you’re likely to use the car day-to-day.

Running costs aren’t generally too much of an issue for MX-5 owners, though. The engines are frugal and relatively clean, and although the model definitely offers a sporty drive, the performance is not sufficiently hard-core to take an undue toll on consumables like tyres and brake pads.

The new tax system for CO2 emissions means all cars are subject to the same £140 annual charge. Company car tax Benefit-in-Kind liabilities will range from around £2,200 to £3,200 per annum for a 40 per cent taxpayer. 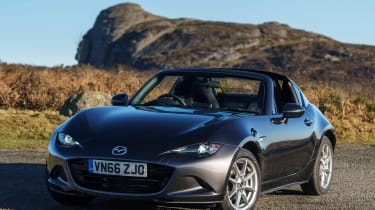 The RF model is likely to sell in lower numbers than the popular MX-5 roadster, and this level of relative demand is reflected in slightly lower predicted residual values for the RF. In other words, while you pay a bit more up front for the folding hard-top, at resale time in three years with 30,000 miles on the clock, values of comparable roadster and RF models are likely to have evened out.

The RF offers all the style and panache of the latest MX-5, with a slightly more upmarket feel

The latest versions of the MX-5 embody Mazda’s Kodo design philosophy, which is apparently inspired by ‘the unity of horse and rider’. Whether you can see that or not, there’s plenty to like about the latest Mazda sports car line. The elegant, swoopy contours make the new MX-5 and MX-5 RF a lot more interesting to look at than previous generation cars.

With its swooping, sporty roofline, the RF is arguably even more eye-catching than the roadster, and it looks especially good in the special Machine Grey paint developed for this model.

Inside, the MX-5 line-up has matured well too, and the RF’s driver-focused dash and tri-pod instrument binnacle has a classic feel. The RF’s cockpit has a snug wrap-around effect enhanced by the rear buttresses and wind-deflector behind the seats, and because it’s supposed to feel a little more upmarket than the roadster you can specify an attractive leather finish for the dash.

The folding roof and glass back window design is interesting too, not just for its theatre and added practicality, but because it folds away with no detriment to the available boot space. 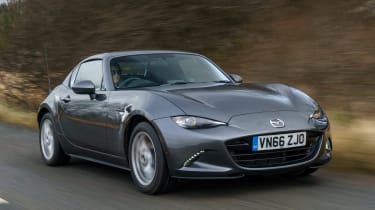 The infotainment options offered on the MX-5 RF mirror those on the MX-5 roadster, which means you get a seven-inch centrally mounted screen on top of the dash, which is controlled by a rotary dial between the seats.

In fact, the MZD Connect system offered by Mazda is one of our firm favourites, offering intuitive controls and a sharp, crisp display. There’s no Apple CarPlay or Android Auto, though you can use voice controls, and the standard sat-nav comes with three years of free updates.

Still confined to exterior dimensions set in the 1980s, the modern MX-5 feels cramped against rivals

There are obvious practical benefits to specifying a hard-top MX-5, including increased security and greater refinement. Otherwise, the package is all but identical to the roadster, which means you get a two-seat cockpit with a slightly awkward driving position. The steering wheel can’t be adjusted for reach, and with no extra headroom compared to the roadster, taller drivers are likely to feel a little restricted behind the wheel.

Practicality feels a little overlooked when it comes to cabin storage too. There are no door bins or glovebox, meaning the only place you put odds and ends are a small lockable cubby between the seats. 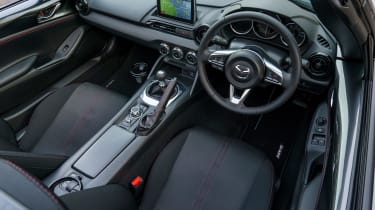 There’s not much space inside an MX-5, particularly for taller drivers. Head, shoulder and knee-room are all restricted, and some drivers will struggle to find a decent driving position due to the fact the steering wheel only adjusts for rake and not reach.

The MX-5 RF has a boot that’s identical to the roadster model, and while that may seem good for such a complex folding hard top, it’s pretty small alongside comparable rivals. At just 130 litres there’s room for little more than a few squashy bags.

Mazda usually scores well in our satisfaction surveys, and crash test results are competent too

Buying a Mazda is a pretty safe bet, and although the latest MX-5 range is too new to have figured in our Driver Power survey, the last model finished a highly creditable 17th out of 150 cars in 2016. Mazda as a brand usually performs well in the survey, too.

There’s been no specific Euro NCAP crash test for the RF model, but the MX-5 roadster has achieved a solid four stars with adult occupant protection rated at 84 per cent. It’s reasonable to expect the RF to perform just as well in the event of an accident, in spite of its small extra weight. There’s no automated brake assist option, but the Sport Nav trim level comes with lane departure warnings, and you can spend £400 on a Safety Pack which includes auto-dip headlamps and blind-spot monitoring, plus a cross-traffic alert.

The build quality has always been solid, but the latest generation of MX-5 models have responded to criticism of some of the interior materials, which have been upgraded to good effect. 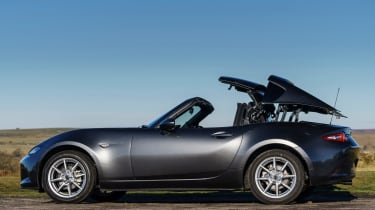 Mazda vehicles are all sold with a three-year warranty, and although mileage is disappointingly capped at 60,000 for the 36-month period, that won’t affect many buyers.

The Mazda MX-5 service schedule require dealer visits every 12 months or 12,500 miles. You can manage the cost with fixed price and monthly service plans. 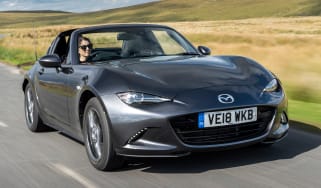 The MX-5 convertible recently received a more powerful engine, and now the hard-top gets the same treatment
Visit/mazda/mx-5/103545/new-mazda-mx-5-rf-sport-black-2018-review 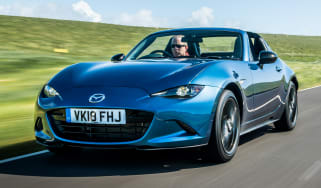 Mazda has launched another special edition MX-5, adding extra style to one of the best sports cars around
Visit/mazda/mx-5/100384/long-term-test-review-mazda-mx-5-rf 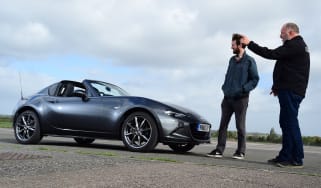 Final report: two-seater leaves fleet in style with a day of on-the-limit driver training
Skip to HeaderSkip to Content