The MX-5 convertible recently received a more powerful engine, and now the hard-top gets the same treatment 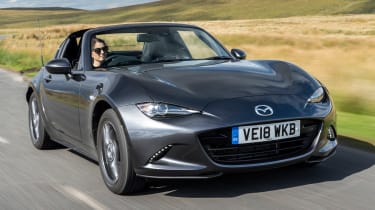 The Mazda MX-5 RF is treated to the same updates as the convertible, the most welcome of which is the introduction of a more powerful engine. As before, the RF is the slightly more refined option, but loses just a tiny bit of the soft-top’s sense of occasion while costing more, too. Whichever version you choose though, the MX-5 remains a wonderful sports car.

Mazda does facelifts differently to pretty much every other mainstream car manufacturer. While most resign themselves to slapping a new set of headlights on the front, a new paint colour or two on the outside and a different seat trim in the cabin, Mazda focuses more on the technical and the practical.

That’s certainly the case with the updated MX-5: the 2018 model adds useful features like an adjustable steering column, and improved mobile phone connectivity. Most importantly however, it gets more powerful engines – significantly so in the case of this 2.0-litre. We loved the convertible when we drove it recently on the international launch, so how does the RF compare in the UK?

Introduced a couple of years into the latest roadster’s life, the RF offers a more refined approach to the MX-5 formula. The T-bar panel hides itself away electrically behind the seats in a matter of seconds, and brings with it a little more security and rigidity. All this comes at the expense of weight, however. 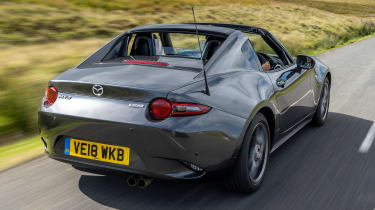 The RF weighs roughly 50kg more than the drop-top, and although that’s all fairly high up in the car’s mass, it does little to harm the the car’s fantastic chassis. Drive them back-to-back and there’s a slight hint that the chassis rotates around a higher point, but it’s only something you’d notice when really pressing on.

The changes to the 2.0-litre petrol engine, however, are much more obvious. Lighter pistons and conrod, new camshafts, revised exhaust and throttle valves, as well as updated fuel injectors and new air intake, have resulted in an extra 23bhp. That takes the the total to 181bhp – and there’s more torque available throughout the rev range, too, with an extra 5Nm at its peak. Finally, the rev limit rises 700rpm to 7500rpm.

It all adds up to an engine with a much greater sense of urgency and excitement. While so many cars turn to turbocharging – including its sister car, the Abarth 124, the Mazda’s naturally aspirated unit baits you to rev it out at every opportunity. The throttle response is sharp, and the power builds towards the red line. The extra revs make it sound more thrilling, but a little extra parp from the exhaust still wouldn’t go amiss.

There are some other niggles to consider, however. Taller drivers might hope to sit just a touch lower, and many will wish for a little more side support from the seats. Roof down, the RF still generates quite a lot of wind noise around the buttresses – though it is more refined than both the fabric-topped model and the hard-top Abarth 124 GT.

It’s hard to argue with the fuel consumption though. Officially, the RF manages 40.9mpg, and that appears to be an entirely achievable figure in the real world. A stop/start system is now standard, which helps to save a fuel in heavy traffic. 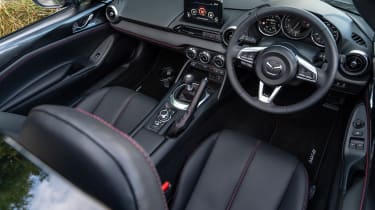 So the biggest choice, then, is whether to go for the convertible or RF. Well, the latter is more refined at a cruise – the extra metalwork behind the seats means that much less road roar from the rear reaches the cabin. It does, however, mean that the exhaust note is a little harder to hear. And the open top feel of the convertible is reduced to little more than the feeling of opening a big sunroof.

The RF costs £1,800 more to buy than the equivalent convertible, too. It’s not a huge step to justify for those who don’t quite want to commit to the full drop-top experience, particularly when, once the PCP figures are confirmed, the two are likely to be separated by as little as £20 per month.