Boot organisers help keep your cargo contained, but which is the best? We tested eight of them to find out... 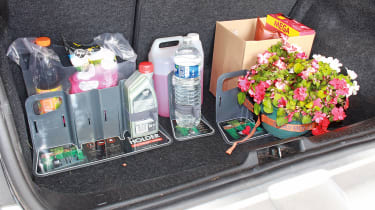 Over the years, car makers have worked hard to improve cabin storage, and these days it seems that cup-holders and cubbies are everywhere. But the boot largely remains a big, open space, which is why there’s a market for organisers to keep things in place.

You might need one to carry things on every trip (such as tools or a brolly) or maybe you just want something to stop the eggs, wine and cake rolling around on the way home from the supermarket. Most organisers are foldable boxes, although some fix to the back of the rear seat, leaving the floor area clear. It’s also important to consider their size; a large organiser can hold more, but could be impossible to lift when full. Equally, it will take up more room, even when folded down.

We tested eight and started by assessing their size, build quality and practicality (handles, nets and the number of dividers). We preferred products that were secured, so didn’t slide around on the floor when full.

We used each to transport a variety of products, with our basic line-up comprising two bags of shopping (including three large drinks bottles and a box of cereal), a 130mm plant pot, one litre of oil, a puncture-sealant aerosol and a fire extinguisher. We also considered the boot organisers’ size and value for money based on the latest online prices. 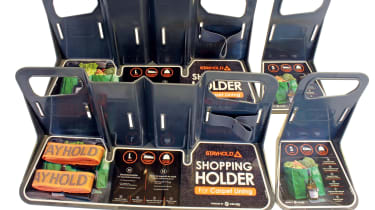 This set comprises two large and two small plastic polymer shopping holders, two elasticated straps and a pair of heavy-duty (40kg) versions. Between them it was possible to secure all our test items and more besides. The wide Velcro strips stuck the holders to the carpet, preventing luggage movement, and just about any product could be held in place using the straps.

When not in use, the holders took up little space because they just stuck along the side of the boot. This is a great, versatile product range with dozens of possible in-car uses. 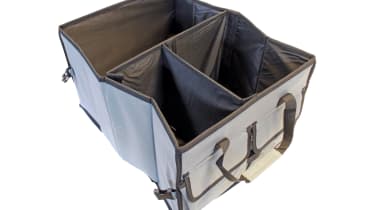 This was the most solid foldable organiser we tried, produced in wipe-down polyester with double-stitching. It comes with two removable dividers, which can partition the product into two or three compartments. There’s no Velcro to secure it, but there are ring buckles at each side for connecting the tethers to floor tie-downs.

We easily got our basic test kit loaded, and we could lift the bag out without squashing everything inside. We also liked the plastic buckles, which kept it folded for storage. 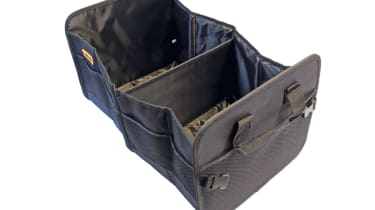 Halfords’ Boot Organiser is similar to the EletecPro but not quite as stiff. So, while it easily coped with our test pack, it was hard to pick up, despite the large, stitched handles at either end. The space is split in two by a fixed divider, and we were pleased to find strips of Velcro under both compartments, which stopped it sliding around.

There are four net pockets on each side and a large one on one end, with the other having a plain pocket; these would be handy for smaller items. Not perfect, but good value at just £10. 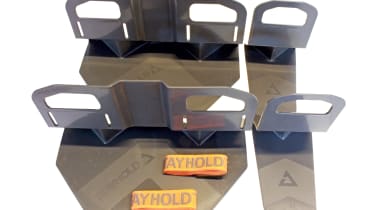 The Sidekick works like its Metro sibling, but is designed for rubber-mat flooring (although it will also work on carpet). There are dozens of cleats on the undersides, which gripped the surface, and the design pushed the base back so that bags and boxes rested on it for more stability.

The bigger holders were medium (rather than large), with only two strap slots; the smaller holders had none, although four straps were supplied. We were able to corral our test kit easily, and the various pieces can be purchased separately so the kit can be expanded. 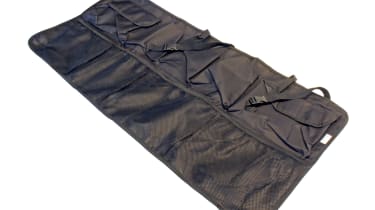 At 94cm wide, the Rovtop would suit all but the smallest of hatchbacks. It attaches to the rear headrests, and Velcro along both sides and the lower edge secures it to the seat backs; this made it very stable during our test.

The Rovtop isn’t large enough to take bags, bottles or large boxes so is mostly useful for carrying items required for every trip, rather than recent purchases, which limits its appeal. There are two wide pockets with Velcro flaps, and three open pockets on the top row. Beneath is a row of nets. None were particularly capacious, although they’d be okay for small tools and phone power banks. 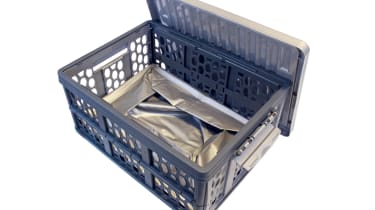 A really interesting flat-packed container made of plastic, the sides of which folded and opened quickly, clicking neatly into place to make a solid box. It handled all of our test shopping selection, although some of the products protruded above the sides so we couldn’t use the lid.

The Fvino comes with a waterproof PVC bag and a flexible foil cool bag, again the same size as the box, but they can be used separately. We’d have liked a way to secure the box to the floor, because it was prone to sliding on the carpet. It also took up more space than others when stored flat. One of our favourites overall, but hampered by its high price. 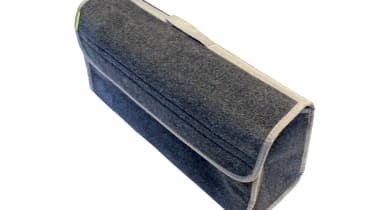 As the name suggests, this is a bag rather than a box, which means it’s better for carrying odds and ends rather than a couple of shopping bags. We liked the long 50mm strip of Velcro on the base, and the strip along the back, which mirrored the self-adhesive strip that fitted to the boot side.

The carpet construction was rather thin, we thought, but it became more rigid when the bag was fitted. We could get a few of our test products inside but, at 22cm high, the flip top couldn’t be closed. This is a good idea as a regular carry all, and good value, but not something you’d use for even moderate amounts of shopping. 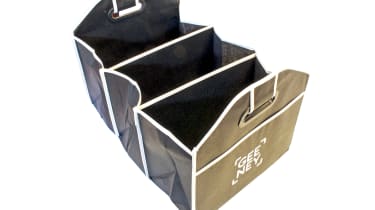 At less than £8 and with a similar capacity to the Halfords and EletecPro organisers, the Geeney appears to be great value at first glance. It’s divided into three compartments with two fixed dividers, which narrows your storage options but makes it easier to access items.

It was able to cope with our basic loads and folded down to a mere 2cm tall when stored. However, it’s very lightweight, with the base being so thin as to be virtually see-through – and we worried about the organiser’s staying power. The sides and ends were of a thicker construction but it still made lifting it when full almost impossible.