Which is the best cool box for keeping food and drink fresh all year? We find out… 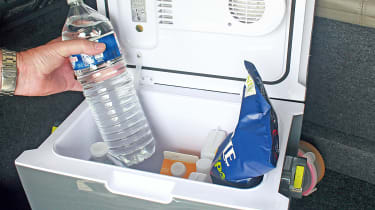 Whether you’re a regular picnicker or just going on a long journey, it’s good to have a powered coolbox. And not just in the summer; if you choose one with a heat facility, it can be used all year.

A 20/25-litre box is fine for general use, but larger families will need more room; and a box that works from the mains as well as a 12v supply is more versatile – you can start it cooling down before you set out, making life easier for your car’s battery. You can run a 12v box from the mains using a transformer, which typically costs £15-£20.

A variable temperature control is increasingly important to save energy and avoid cooling/heating too much. Some boxes won’t cool to below zero degrees Celsius to prevent freezing.

So which one will help you chill out this summer? We plugged in eight to find out.

We ran each box at its maximum power for two hours, logging the temperature compared with the workshop figure at the start and finish. They were all also loaded with a typical selection of picnic foods, including crisps, sandwich boxes and 1.5-litre bottles of different shapes and sizes, to see how they coped.

Features such as lead storage, USB sockets, wheels, a heating function and mains options were all rated, as was the build quality. This time we placed more emphasis on some form of temperature control, and balanced the box’s capacity and weight against its features and cost, using makers’ prices and online sources.

The Outwell ECOcool performed well and had a great specification, so it took the win. However, the Mobicool G35 would be better for anyone who needs extra capacity. The Halfords 24L has won tests before and did well again, but showed its age against the newer competition. 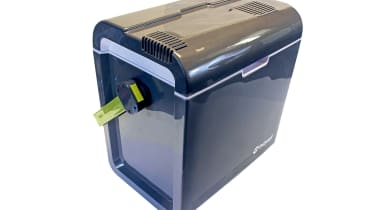 If you don’t need the space and gizmos of the G35 (below), the 24-litre ECOcool has a similar spec and is almost £50 cheaper. It cools and heats as required and, although it was a touch too short to take the taller bottles, it easily coped with four of the smaller size. It has two dividers, one of which is filled with water and could be frozen beforehand as an extra cooling aid. The difference of 17 degrees Celsius from ambient was impressive, although we’d have liked more choice in the temperature control, as there were just Eco and Max sliders. 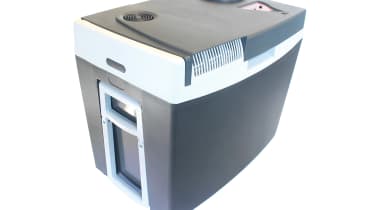 It may look expensive, but this mains/12v box almost has it all. Its 34-litre capacity will be okay for most eventualities and, although it’s not light (8.1kg), the wheels made it easy to move around. It heats and cools, and we liked the USB socket, cable storage, useful divider and power dial, which gave very fine control of the temperature. It could stand on end (like a fridge) and the hole in the lid allowed a bottle to be removed with little temperature loss. Cooling to -4.2 deg C, a difference of more than 15 degrees from ambient, was good, and there was lots of adjustable cooling power. 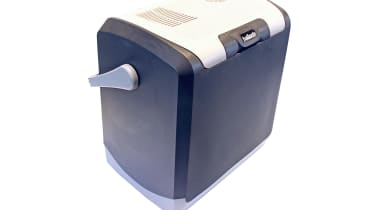 This former test-winning 24-litre box is ideal for a couple or small family. Although it wouldn’t take the taller 1.5-litre bottles, it managed all our picnic gear. There is no heat function or temperature control, so it kept cooling down to -6 deg C and 16 deg C below ambient. That’s impressive from a (12v only) motor rated at 40W, but less good if you don’t want the contents frozen. The box is still good value, but it has lost a lot of ground in terms of performance and features. 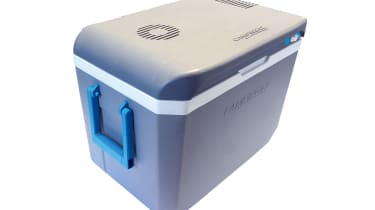 The lightweight (just 5.7kg) Campingaz box was the second largest on test, and pushed the Halfords hard. It would be the ideal choice for anyone on a budget and who doesn’t need a heat facility. It works with 12v and 240v supplies, and produced good results, although it didn’t chill as low as some, because the FreezeGuard feature kept the lowest temperature to around 0.8 deg C. A divider would have been nice and the lid could be awkward to open, but the box could take two larger (or four smaller) bottles and swallowed the picnic with room to spare. 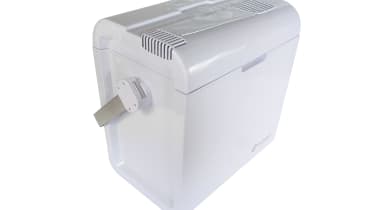 As the name suggests, this is the luxury version of the ‘cool’ Outwell. It is also finished in bright white and has a nice ‘click’ handle, as well as a 24-litre capacity and heating capability. As expected, it performed identically; the rear-mounted panel featured the same slider controls for voltage, hot/cold and so on, and a USB socket, although this worked only when the box was in ‘Max’ mode. The other differences are the addition of an LED light and a combination wood/aluminium handle, but the higher price seemed a bit too much to pay for them. 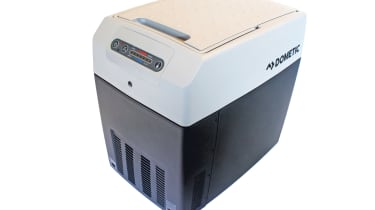 Unusually, this box has its motor at one end rather than in the lid. The benefit is in extra height, so the box could handle taller bottles. Our picnic fitted okay, too, although it was a bit of a squash as the capacity is just 20 litres. We loved the clear display, with buttons and seven LEDs that let the user choose an exact temperature, whether the box was heating or cooling. It was limited to zero deg C, at which point it cut out, saving energy. A nice box, but it needs serious use to warrant the price. 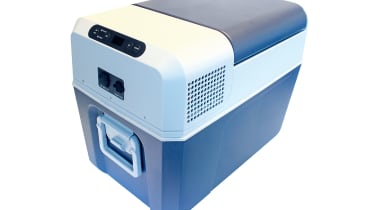 At 11.5kg, this was the heaviest box on test, largely because of its hermetic compressor. It works like a domestic fridge and can be used as a freezer for some items. Its capacity of 38 litres was impressive and it took any combination of bottles and food. The large digital display was flanked by simple buttons, so an exact temperature could be set all the way down to -10 deg C. The high price can’t be ignored, but in the right situation – a motorhome or caravan, for example – it would be ideal. 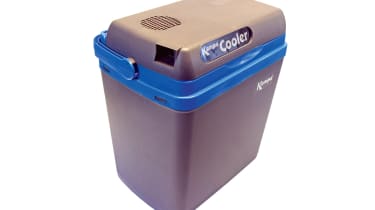 The Kampa looked good value, but its light weight (3.7kg) revealed that savings had been made in quality; the plastic handle easily twisted when being flipped over to unlock the lid. To make matters worse, the box only worked from a 12v supply, and we couldn’t open or close the lid with the plug in place. At 12 deg C below ambient, the results weren’t too bad and, although the box would only fit one large bottle, it was tall enough to take six smaller ones. Unlike the Halfords, it has no onboard cable storage, but it also has no temperature control.