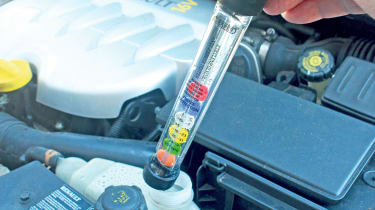 You don’t just have water in your radiator, but also coolant. Often called antifreeze, this raises the boiling point and drops the freezing point of the mix and, in modern engines, stops corrosion. That mix of coolant and water is key, and incorrect dilution stops it working as it should, so a tester to keep an eye on it is a cheap and handy garage tool.

Which is the best to ensure your cooling system does its job? We tried eight. None was expensive, especially next to the damage that frozen coolant or excessive corrosion could cause.

We checked each for accuracy, logging three results from each tester, and also marked the products for usability, clear and safe instructions, and price at the time of testing.

Accurate results combined with an easy-to-read scale ensured that Draper’s new product came out on top in this test. Our previous winner, the Bahco, again proved an impressive system, with good readings, but it wasn’t quite as easy to use, finishing in second place. Filling out the top three was the Clarke, with neat features and a low price. 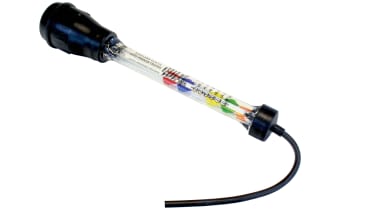 This new Draper produced some impressive results, being on par with our previous winner. It was furthest adrift on the OAT 33 antifreeze, at four degrees high, but performed better on the others and was perfect on ethylene 50.

It’s much larger than the Bahco and, importantly, the scale was far easier to read. The test results depended on the positions of six discs, which rose and fell according to the antifreeze percentage, and sometimes it was necessary to wait a while as one or two made up their minds. 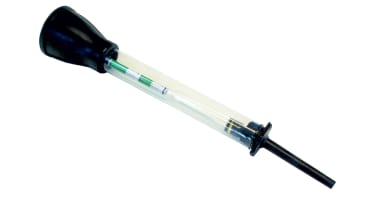 A winner last time around, the Bahco remains unique in this test because it can handle both ethylene and methanol mixes, and uses a float, instead of discs or balls.

It’s made of glass, rather than plastic, and its accuracy was similar to the Draper’s, with four scales, covering boil-over and freezing protection, Celsius and Fahrenheit. However, the markings were small and its readings difficult to understand, while the diagrammatic instructions were limited, and didn’t mention heat safety. 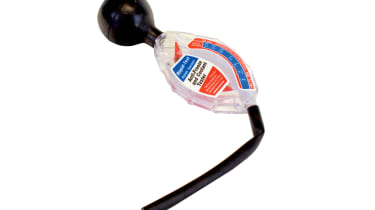 It’s obviously related to the Gunson, but the Clarke produced better results. In general, it was as good as the Bahco and Draper, yet was seven degrees adrift on the ethylene 50 tests.

We liked having the instructions printed clearly on the device itself, and the extra pointer at the top enabled the user to get it exactly horizontal for more accurate readings.

The instructions were reasonable but, as with most of these products, it didn’t say how dangerous antifreeze is, if ingested. 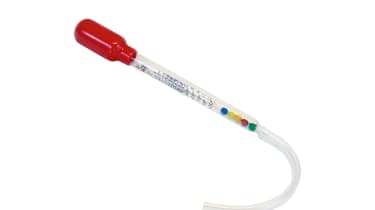 If you need to test propylene glycol your choice is limited to this Sealey. It’s called a ‘pocket’ product, but unless thoroughly cleaned and dried we wouldn’t put it there, given the dangerous nature of antifreeze.

The small (130mm) glass tube uses coloured balls to denote the protection level, its markings being almost the same as in disc-type testers. Results were good – just three degrees off at both test points. While the instructions don’t advise how to use the product, there’s lots of safety info. 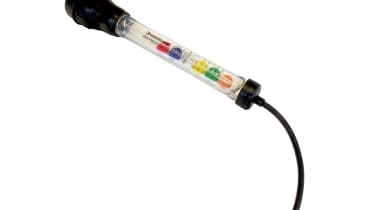 Once again, the Silverline came in at an extremely attractive price, especially given that it was essentially the same design as the Draper and Laser offerings.

We liked the instructions, which covered all safety aspects, as well as the danger to children. As with the other testers of this type, the discs that were floating defined the level of protection, and occasionally some discs would rest in between, making it necessary to guess a figure. Reasonably accurate, but not at the level of the top four. 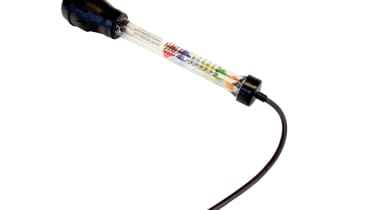 The third of our disc testers, this didn’t have the best instructions, but they did mention that too much antifreeze (70 per cent or more) cuts the engine protection, because pure antifreeze freezes at around -6 deg C.

Although its accuracy was mostly good, especially on OAT 33, it was 10 degrees out on OAT 50 for no obvious reason. The results were similar to the Silverline’s, but it lost out on price. Irritatingly, the rubber suction bulb leaked a little when pressed hard, so more care had to be taken. 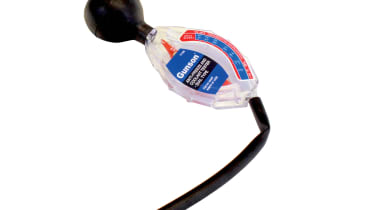 Apart from the name on the pack this is identical to the Clarke tester (above), but its results weren’t as good – typically between four and six degrees optimistic.

We liked the compact, easy-to-use design. The instructions were good and mentioned the need for caution with heat, although there was nothing about personal safety relating to eyes, skin and ingestion. In principle, this is a good device, but the needle is very wide, even where it reaches the scale, making it tricky to read correctly. 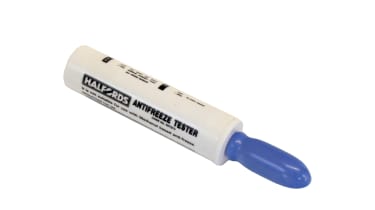 This is a genuine pocket product; it’s just 125mm long and comes in its own plastic holder. We liked the comprehensive instructions that were printed on the packet and repeated on the holder, although the writing on there was tiny.

Three coloured balls relate to the level of protection, but it was tricky to get the right amount of liquid inside, while the tester’s size may make it hard to reach into some expansion tanks. It’s the cheapest product here, but also the least accurate.