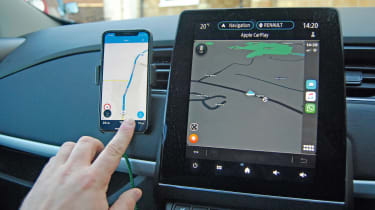 Having a built-in satellite-navigation system in your car used to be considered state of the art tech. But these days, the smartphone that you carry in your pocket is likely to be more sophisticated, connected, up-to-date and easier to use.

In fact, many car companies have given up trying to beat smartphone apps and are making integration a key part of their new vehicles’ infotainment systems, usually in the form of Apple CarPlay for iPhones, or Android Auto for non-Apple devices.

The biggest names in phone navigation are constantly improving their systems with extra features to make finding your destination faster and easier. They’ll often also include speed camera detectors, suggested points of interest, or parking spots, and can even warn you of road closures, or even potholes.

We tried eight leading apps to see which should find its way into your phone, and which you should tell to get lost.

We set the apps the same navigational task, using an iPhone X connected to a Renault Zoe via Apple CarPlay, if the app was compatible. Rather than an exact postcode, we entered a partial address to see if the app could find it. We then stopped halfway and asked for the nearest petrol station and a restaurant.

We checked the accuracy of the ETA and scored the clarity of the guidance. We also took a deliberate wrong turn and saw how quickly the app got us back on track. Points were then added for useful optional extras, plus we took into account any costs.

Google Maps works brilliantly in most situations, using the might of the search engine and mapping data to make guidance incredibly simple. Once on the move, you are part of the crowd, which feeds back live traffic data.

If you don’t want to use Google for whatever reason, TomTom’s mapping and features are slick to use. Waze is the professional’s choice, and promises to avoid traffic above all else. 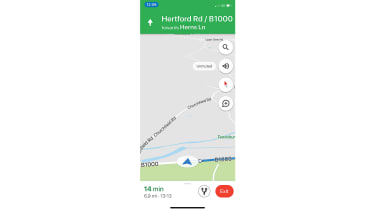 Using the might of Google’s search engine to find addresses makes this app incredibly powerful. It will even tell you if businesses will be open when you are due to arrive, while Street View shows you the property you’re looking for.

The app also crowd-sources data from users to judge traffic speeds in real time, rerouting to avoid busy roads. As part of a recent upgrade, users can now report issues on the road, such as speed traps and accidents.

As you might expect, it works well and the road data is bang up to date, including real-time info on closed routes. Some of the roads it selects are a little small, though. Still, Google Maps is an almost indispensable app. 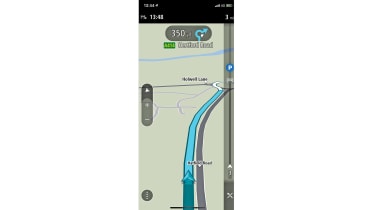 A previous Best Buy thanks to its clear mapping, ease of use and accuracy, this is one of our recommended picks this year. It has the same qualities and the most attractive map, whether you are using the car’s screen or your phone. It’ll also warn you of speed traps, and can measure your average speed in a SPECS camera zone.

As well as directions, the TomTom also displays points of interest on the route, and will direct you to the parking nearest to your destination.

There are a couple of wrinkles in the TomTom’s clean sheet, though. Some of the POI data is outdated, and it costs £1.99 per month. That’s cheap for a great app, but rivals here are free. 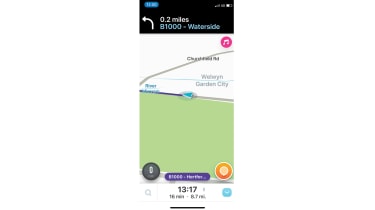 Waze has a reputation for being the professional drivers’ favourite because of its ability to find a way around traffic.

As with Google, it uses the power of users to measure traffic flow, but it relies on them to report issues such as speed traps, roadworks, accidents and even potholes, which it points out with unerring accuracy. As an added bonus, Waze will allow you to play Spotify music and podcasts through the app.

Route guidance is accurate and it certainly avoids traffic, but we feel that it seems to be choosing minor roads to avoid any jams, however light, when it would have been less stressful to stick to the wider routes. Still, it’s an impressive app. 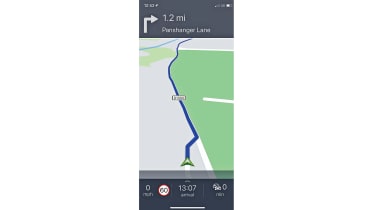 The Here WeGo app has done well in past tests, and it continues to impress, especially since it’s free to use and has seamless CarPlay and Android Auto integration. The app found our address quickly and offered us four routes via five modes of transport. If you choose public transport, it will even link to timetables.

In car, the screen displays a simple map with your speed, the local limit, ETA and traffic delays on the route. The guidance is accurate and rerouting is fast, but the voice sounds artificial and is unable to cope with simple pronunciations. Roundabouts are described as ‘traffic circles’ too. It’s an easy-to-use app, which is all the more bearable with the sound off. 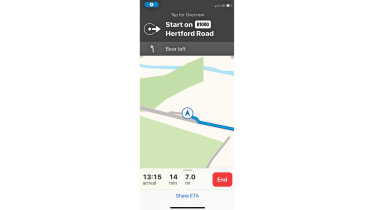 Apple Maps is loaded to every device the company makes, but – anecdotally at least – it seems many users swap to Google Maps. That’s a shame, because it has become much improved in recent years, including taking map data from TomTom and Ordnance Survey.

The app offers three routes and four modes of transport (drive/walk/public transport/taxi) and has an extensive and accurate POI database, with links to TripAdvisor for businesses.

It has a clear guidance voice which even manages to pronounce tricky place names accurately, and it reroutes quickly, but the animations are clunky. The route on the CarPlay screen isn’t very clear when compared to other roads, making it tricky to follow. 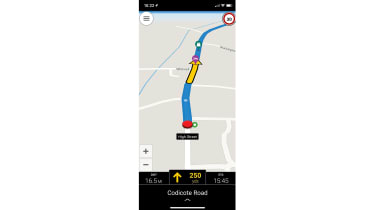 CoPilot is another past test favourite that still impresses, with a clear choice of three routes, an extensive POI database, accurate instructions, and some of the clearest maps in this test.

Primary colours make it look a bit like a Lego instruction book, but they are certainly clear and easy to read. If that’s too distracting, the app also offers a ‘Safety Mode’, which does away with the map and just displays the basic instructions. Rerouting is quick and fuss-free too.

In other ways the app is showing its age. There’s no CarPlay or Android Auto compatibility, and the voice synthesiser sounds clunky. There’s not much here to make us inclined to spend £14 a year to use this over a free app. 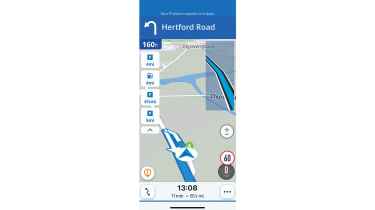 This app has changed beyond recognition since our last test, including CarPlay and Android Auto integration. Its mapping is accurate and clear, and it offers at least two route options to most destinations. The POI database is extensive, but doesn’t have the detail of other apps, and it includes a few businesses which had closed years ago.

Even after you splash out £31.99 for a lifetime subscription, there are a few options to make it work even better, including ‘Real View’ augmented-reality navigation overlay and a head-up display, both costing £2.99 each.

It looks impressive and works well, but it did crash on us once and had to be rebooted. This, and the price, make it hard to recommend. 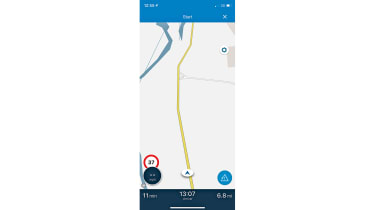 We started off being very impressed by this app from Michelin. In exchange for occasionally watching an advert, it gives you access to the company’s comprehensive destination guides.

Once you’ve chosen where to go, it will then work out the likely cost of your journey using fuel consumption data for your car. It will also tailor the route for the size of your vehicle, allowing you to change the journey if you’re towing a caravan, for example.

The routes are slick and the guidance easy to follow but the voice instructions are stilted, and the posted speed limits are odd and inaccurate, such as showing 42mph in a 60mph zone. There’s no Apple CarPlay or Android Auto connection, either.