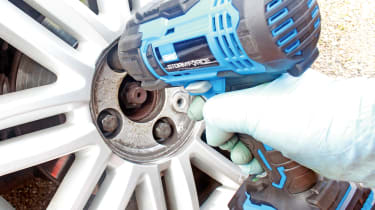 A good impact wrench takes the hard work out of almost any garage task, from simple wheel changes to heavier jobs such as brake and suspension repairs.

Not long ago, using one required a bulky compressor, with its cable and awkward hose trailing around your garage. Now, the latest battery and motor tech means that the best cordless units are as good as their pneumatic counterparts, and with none of the previous clutter, they’re now much more convenient.

So which one takes the strain out of car DIY? We charged nine to reveal all.

An ideal wrench has plenty of torque but isn’t too large or heavy, so it’s a pleasure rather than a chore to use.

To test power and stamina, we drove and removed eight, 13mm hex 50mm head screws into a solid block of wood, noting the time taken. Then we removed eight wheel bolts and a hub nut, tightened to 90Nm and 175Nm respectively. We used black, shatterproof impact sockets for safety.

Accessories, torque settings, performance, battery size and number, and features like lights and battery-state indicators were balanced against prices from makers and online sources.

It looks expensive on the face of things, but with 12Ah of battery power, a raft of features and great performance, the HiKOKI is a deserved winner for the second successive test. The similar Sealey chased it hard but failed to overthrow our champ. Meanwhile, the Panasonic acquitted itself well but sadly its high cost hindered its chances of grabbing second place. 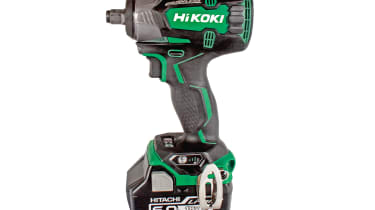 Already a multiple test winner, the HiKOKI stood up well to an effective onslaught from Sealey’s newcomer. We still like the HiKOKI’s large, strong plastic case, which came complete with wrench, charger and the biggest battery supply we’ve tried on any cordless product. It’s hard to imagine how much work you’d need to do to totally exhaust the two 6Ah packs. Protected against dust and moisture to IP56 standard, it was wieldy in use, belying its light weight and stature to hammer any fastener into submission.

Unlike the Sealey, the HiKOKI’s instruction manual was comprehensive and included several diagrams. Performance on the car was almost identical, but it pulled ahead on the hex screws test, which required torque to be applied for longer.

Like the Sealey, the LED light on the base stayed on for 10 seconds, which was useful, and it featured four torque-limiting settings to help prevent fastener damage. It’s not cheap, but it’s similar to its rival when battery capacities are considered. 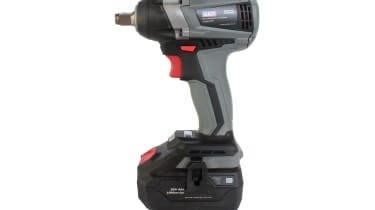 The specification of this Sealey impact wrench was not only impressive, but unnervingly close to the HiKOKI’s. Their weights and lengths were almost identical, and the Sealey’s torque was just 5Nm down. The kit comprised two batteries, a charger and a canvas bag, although a plastic case would offer better protection.

Sealey’s choice of capacities was good; the 4Ah unit managed all our tests with ease and, for most users, the combined 6Ah would be enough. But when directly comparing the wrenches, the HiKOKI has twice the capacity. It waltzed through the wheel nut test and even the hub nut (torqued to a massive 195Nm) was dispatched in just four seconds. It was good when driving the large screws into wood, albeit 30 per cent slower than the HiKOKI.

But the instructions were very limited, especially as they didn’t even mention the three very useful torque modes. We liked the wrench’s general feel, the charge indicator on the battery, and the foot-mounted LED light, but the HiKOKI has the edge here. 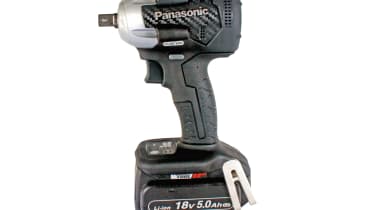 Had it not been all black, we might have confused the Panasonic with the Hikoki, so close were the dimensions. It’s exactly the same length and weight, although its two batteries are 5Ah. We liked the three LEDs around the nose, the three battery-state LEDs and the excellent choice of five torque modes. The spec shows that it runs a little slower than the Hikoki (2,500rpm as opposed to 2,900rpm), which lost it a few seconds on the hex test, but otherwise performance was identical. The final decision came down to price. 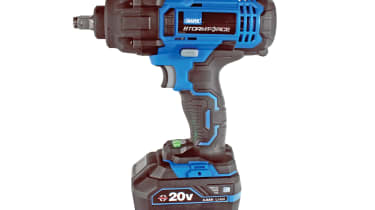 This stylish, well-priced new Draper was nice to use, with lots of protective rubberised sections. The 20v non-brushless motor had a healthy 400Nm of torque, so performance was strong, as long as you have room to work. It’s the heaviest wrench here, at 2.6kg, and at 215mm long it was a bit cumbersome in tight spaces. We liked the battery-state LEDs and impressive five torque settings, easily accessed from the base of the device. There was only one battery but, at 4Ah, it gave a good working time. 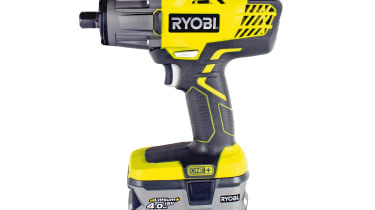 The brushless Ryobi came so very close to the Draper, and also had a single 4Ah battery with a claimed 400Nm of torque. It gained a little because it’s a touch lighter (2.3kg) and shorter, at 205mm, and the tri-beam light stayed on for a while. Three-speed settings, rather than five, were accessed from the top of the machine. While performance edged the Draper sadly, given its higher price, it comes as a bare unit with separate charger and battery, and no case or bag. 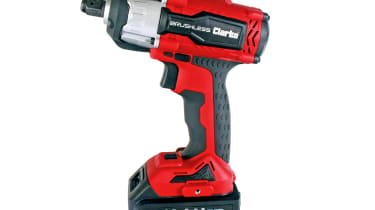 At a mere 1.5kg, the Clarke was the lightest 1/2-inch drive wrench we tried, thanks in part to its smaller batteries – two 2Ah cells supplied in the case (there’s a twin 4Ah version at £215). We’d have liked some kind of battery-state indicator, but at 180mm long t his was easy to use and the three LEDs around the nose were handy, although they went off with the trigger. It performed well with the hex screws but made harder work of the wheel bolts and even more so with the hub nut. Nevertheless, a great product for general use. 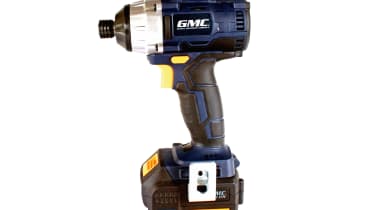 We didn’t expect too much from this single-speed, 1/4-inch drive, brushless wrench, and so were surprised that it coped well with the hex screw and wheel nut tests, and even spun off the huge hub nut. A stunning performance for its quoted torque of 180Nm. It comes in a strong textile bag with four sockets and a driver bit. There are four battery LEDs and the single 4Ah battery provided plenty of work time, although this raised the weight to 1.7kg. It was nicely balanced and a great option if you don’t need masses of torque. 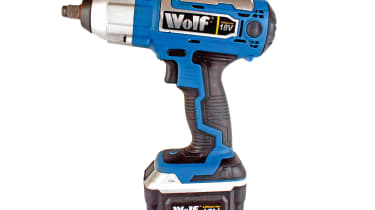 Wolf’s budget buy has got better value for money since our last test because its price now included two 3Ah batteries. It’s still rather old school; it’s the second heaviest wrench, at 2.4kg, the longest, at 24cm, and doesn’t have a brushless motor. It felt a bit clumsy next to some, and its no-load speed of 2,300rpm showed in the hex screws test. The wheel nut results were average and, equally, after a few seconds’ hard work, it turned our hub nut. Not a bad buy, but it was the only 1/2 –inch drive unit with just a single speed. 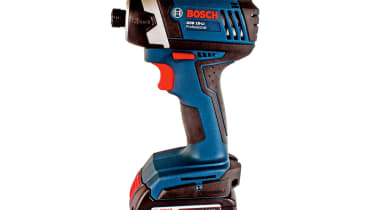 Our second 1/4-inch drive machine also needed an adaptor to use 1/2-inch drive sockets. At 1.3kg, it’s the lightest wrench on test, and comes with two small batteries. The Bosch Professional is clearly not aimed at heavy work; with just a claimed 160Nm of torque on offer, it produced the worst hex screw test results by some margin. However, it did manage to remove the wheel bolts and, after some effort, the hub nut. It’s a neat little device and ideal for general automotive DIY, but it’s an irony that it’s really hammered by the price, especially compared with the GMC.