Which storage solution best organises tools of all shapes and sizes? 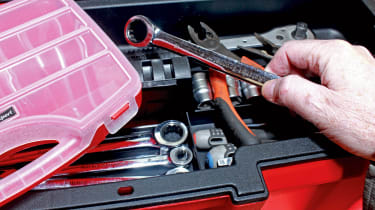 Storing your tools together makes losing them less likely, keeps them clean and means they’re easier to transport. But when considering a toolbox, practicality is a factor as well; while a large box carries more, it’s heavier and trickier to carry.

Plastic (typically, polypropylene) boxes are lighter and just as strong as steel products. They also have no sharp edges, so are unlikely to damage your car in transit. Equally, plastic boxes won’t rust or seize. All the products we tested had an eye for securing with a padlock and some had organiser cases, which are great for storing smaller items such as nuts, screws and fuses.

Any toolbox should be practical, so we took a selection of common tools – spanners, sockets, screwdrivers and a ratchet wrench – to see how well they fitted into the removable tote tray in each product. Underneath, we loaded up with larger items including a hammer, a can of WD-40, a torque wrench, a hacksaw and an adjustable wrench.

We marked the tote tray and any organiser boxes for versatility and number of dividers offered. All these points were balanced against build quality, overall practicality, weight, size and cost, including the price per litre (ppl). Retail figures came from makers and online sources.

It was tight between the big VonHaus and the Curver; the former wins by a hair’s breadth, with the 24-inch Stanley gaining third place. 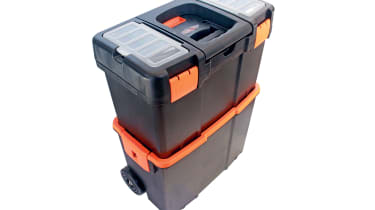 It’s a toolbox, but not as we know it, not least because the VonHaus is actually two boxes. This creates a 76-litre capacity, a full 20 litres more than the Draper Expert, the largest toolbox in our last group test. Of course, this makes it very cheap per litre. There’s a top box featuring two organisers with three compartments each, although they’re not removable. Two plastic lugs attach this to the lower one in a few seconds.

Once locked, the large pull handle was raised to create a twin box set-up, which could be pulled on its large plastic wheels. For car transport, they separate in seconds. The top box easily passed our tote and large tools test, and the lower one is ideal for bigger items. It’s a clever idea with lots of practical space at a bargain price – a winner. 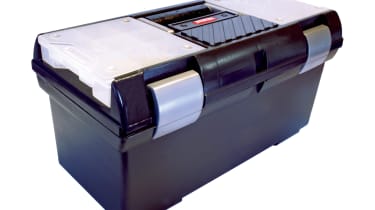 This Curver has won our last two tests, and with good reason; this well-made box is big enough to be useful but not so large as to be cumbersome, at around 33 litres. The tote tray featured a central section, useful for keeping sockets from rolling around, and it took our chosen tools with no problem. Under the tote, there was plenty of room for the bigger stuff and, at 60 ppl, it’s one of the best single boxes we’ve tried.

As we always have in the past, we found its twin organisers – one at either end of the box – to be extremely useful, because both slid out (or locked in place), and had lots of choice with regard to compartments; one had eight and the other had five. This remains a great box, but faced with the versatility, size and great price of the VonHaus Roller, it had to give best this time. 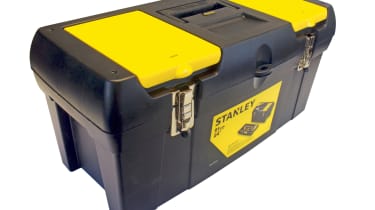 Instantly recognisable in yellow and black, the 50-litre Stanley represents good value, at 50ppl. Tipping the scales at 2.8kg, exactly twice the weight of its 19-inch brother, it had a high-quality feel and offered lots of space for all our tools, with the 50mm-deep tote coming in really handy. The lid locks at 90 degrees and has two forward-facing organisers; each has three compartments, although they’re not removable. Well made and practical, the Stanley came close to a win. If you need space rather than organiser flexibility, this could be for you. 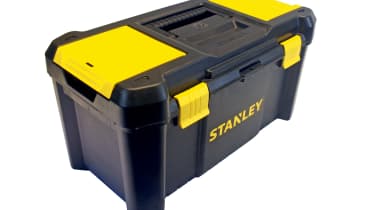 Stanley’s 19-inch variant keeps the same specification as in our last test, except for a £4 increase in price, which lowered its value to 63ppl. As ever, build quality was good, with strong, large front latches and a lid which locks at the vertical. Its tote is about three-quarter length, to allow taller items more space from beneath. The downside was limited tote space, and it was a struggle to get all our chosen tools in; we managed it, but it wasn’t neat. We were able to fit the larger tools in underneath, although the torque wrench and hacksaw had to be angled. 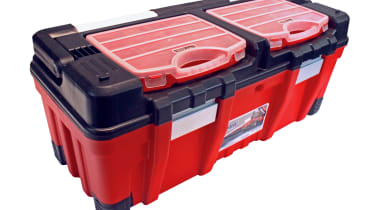 Bigger isn’t always better, but in this case the well-made, 56-litre Draper is a gem, and we loved it. It has a full-length aluminium handle and rubberised grip and the lid houses two full-sized organisers. These are accessible in situ and removable, while each features nine compartments. The tote is 65mm deep, with six divisions, and storing our kit was the easiest of all the boxes we tried. Predictably, there was lots of space beneath for our test items and much more besides. It ticked all the boxes except the one marked ‘price’ which, at 98ppl, dropped it down the order. 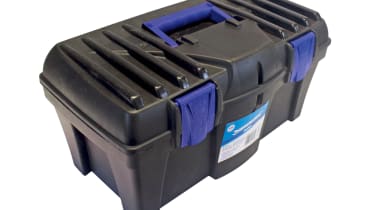 At this price, the Silverline is easily the cheapest box on the test and has the lowest per-litre figure, albeit only a little less than the 24-inch Stanley. It is also the lightest box we tried, at just under 1kg, despite being a decent size, at 25 litres. We fitted all our tools in the tote, yet it wasn’t neat and, more importantly, they tended to drop through the handle cut-out into the box itself. Our larger tools fitted below, but the longer items had to be fitted diagonally. Cheap and okay for occasional mechanical forays, but not for the serious DIY-er. 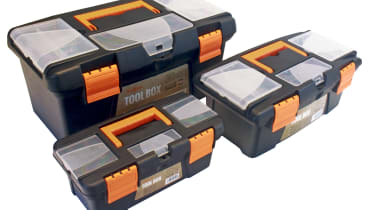 This set of three toolboxes is supplied Russian doll-like, one inside the other. They’re made from decent plastics, all with strong clasps and sturdy central handles, and offer around 27 litres of space between them. The largest is 39.5cm long, but was a bit too short for our torque wrench and hacksaw, while the tote didn’t have enough space for all the tools. Still, the boxes were solidly made and all three offer a trio of organisers in the lids. For anyone who could divide tools between jobs, this set would be worth checking out. 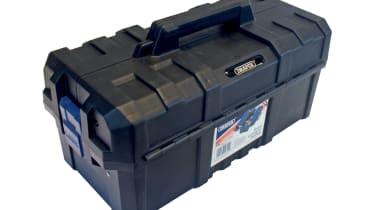 A cantilever toolbox in plastic rather than metal is unusual and meant we couldn’t do a tote test. We used the trays at either side of the lid instead; both come with nine removable dividers to create specific spaces. Taking all of them out on one side and six on the other, we got all our kit in, proving their usefulness. At 2.1kg, the box felt reassuringly solid, although a downside is that you always need the whole box, with no removable tote. A bigger black mark is the price: at £1.31 per litre, it’s easily the most expensive choice here. 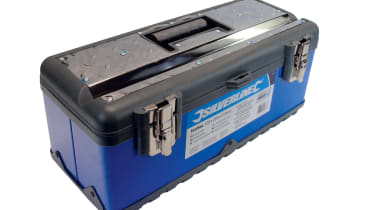 This Silverline box has a body made of powder-coated steel, with a polypropylene lid and base. Finished in bright blue, it follows the brand’s previous range which we rated highly, while the shiny steel top is also attractive and serves to add some protection. However, this means that there are no organisers in the lid. It’s also by far the narrowest box we tried, which made testing tricky. With careful packing, we got everything in the tote, although its length and height meant fitting the larger items was easy. Given the limited features on offer, the Silverline feels quite pricey.