Stunning and charismatic, the Brera fills the coupe brief to the letter. It's a car you would be proud to own and drive. 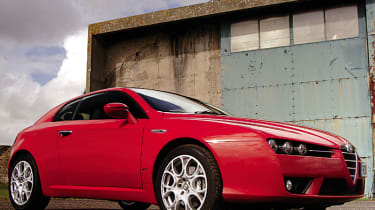 Driving: The Alfa certainly feels sporty to drive - and on rough roads, that's not such a good thing. With too much steering kickback and a pattery ride, it feels as though the Brera was signed off before the suspension engineers had finished their work. On smoother surfaces it's much better, but Alfa's tendency to set its cars up with soft springs and firm dampers ensures the Brera isn't at its best on British roads. But that doesn't mean it isn't fun to drive. With a shorter wheelbase and new rear suspension, the Alfa turns in keenly, has good steering and is involving around corners - it simply needs a touch more polish. No qualms about the engines though, all of which are free-revving delights, particularly the petrol units. The diesel has ample torque and sounds a bit like an old Audi Quattro, while the gearchange is good and short stopping distances make up for a spongy brake pedal.

Marketplace: Just look at it. From the proud grille to the bold slash of the tail lights, the Brera is a sensational design. It's not conventionally beautiful but is the kind of car you just can't take your eyes off. Put simply, there's nothing else quite like it - though showroom-hunters would be wrong not to consider the BMW 3-Series Coupe, Mazda RX-8, Peugeot 407 Coupe and (ironically) the Alfa GT alongside it. There's a three-engine line-up that includes 2.2-litre and 3.2-litre V6 petrols (the latter with Q4 four-wheel-drive), plus a 2.4-litre five-cylinder diesel.

Owning: It may have a platform shared with the 159, but 175mm has been lopped off the wheelbase in order to optimise handling. That means little in the way of rear head and legroom. But the 300-litre boot is a decent size, accessed by a hatch and with versatility given a boost by split-fold rear seats. On top of that, the well-built cabin is certainly appealing. The layout is great, and we love the metal dash trim, sunken dials and tactile plastics. The driving position is also good. But best of all, the Brera makes you feel special, with a real sense of occasion. However, it's not fault-free. Stowage space is limited, while pedal position and weighting mean it's tricky to drive smoothly at low speed. Short gearing on petrol engines hurts fuel economy too (the diesel is more impressive), and while 18,000-mile service intervals promise low costs, Auto Express readers rate Alfa's dealer network as the worst in the country. On the flip side, retained values are promising, and both pricing and standard spec levels are keen.