It certainly looks pretty, but can the all-new oil-burning Alfa Romeo Brera wear its badge with pride? 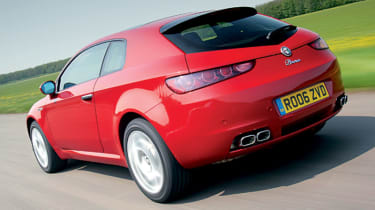 Born from a stunning concept, and using Alfa's best-ever chassis, the new Brera is a car the Italian firm can feel truly proud of. Happily, its oil-burner doesn't detract from the performance or drive, and adds impressively to economy and high-speed refinement. Only the glass sunroof disappoints, but on the whole the car delivers on the promise of its looks.

Let's face it, new Alfa Romeos have never been short on style. But it's often said that if you are thinking of buying one, you should prepare for the worst...

Less-than-positive showings in Auto Express's recent Driver Power satisfaction report revealed that mediocre reliability and dreadful dealer service topped own-ers' concerns. "You are buying a great engine, not a great car," said one. But what if the model you're looking at has a diesel and not a V6? Can an Alfa oil-burner really wear its badge with pride?

In fairness, the firm has done more than any other to enhance the reputation of performance diesels. And with its new five-cylinder JTDm-powered Brera, it continues to do so. You only have to look at the car's rear end to see that, unlike many rivals, Alfa treats its oil-burners just like its petrols.

The four chrome exhausts stick straight out, and are not turned apologetically to the floor as on most other diesels. There's no giveaway external badging, either - and, with the engine switched off, the only surefire way of identifying the fuel source is to lift the bonnet.

Inside the car, it's a similar story; the cabin of our SV model was trimmed to the usual sporty standard - and even had a purposeful-looking turbo-boost gauge. Our only complaint was with the optional panoramic sunroof - it looks good but robs headroom, particularly in the already cramped back seats. At idle, the engine is loud but not unpleasant, and under full throttle the car feels extremely powerful and at least as urgent as the petrol V6.

The Brera can sprint from 0-60mph in 8.1 seconds, and its slick six-speed gearbox makes the most of the 400Nm of torque. Top speed is 142mph, and it's a relaxed, comfortable cruiser at the legal limit. Economy is 41mpg - nearly twice as much as the petrol model. On more challenging roads, the steering is relatively light, yet extremely direct and reassuringly precise.

At 10.4m, the turning circle is also impressive, and makes the Alfa a competent town car, while the ride is firm but not uncomfortable. However, you can feel the weight of the diesel unit in fast corners, where body roll can be surprisingly pronounced. Few models offer such road presence, though, and while at £27,500 the Brera is not cheap, it is one of the best-looking cars for the money.

Only time will tell if Alfa can address the criticisms over reliability and dealer service made in Driver Power, but one thing's for sure - with this Brera, it's made a great engine and a great car.