Italian style meets British brains, as Alfa attempts to make its Brera as good to drive as it is to look at. 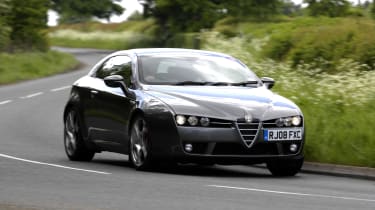 It has the same engine and straight-line performance as the standard Brera, and at a glance is very similar in appearance. But don’t be fooled. The subtle tweaks Prodrive has made to the coupé have transformed it in corners, and the sharper handling complements the car’s stylish design. At £28,450, the S is also very competitively priced. But potential buyers need to be quick, as only 500 are being produced.

Alfa Romeo’s new Brera S is different from most Italian sports cars – it’s still a beautiful Latin design, but its heart has a 100 per cent British beat.

That’s because the S (which stands for Speciale, rather than Sport) is the result of an intensive year-long partnership with UK motorsport specialist Prodrive. And it’s designed to further enhance Alfa’s improving reputation among the nation’s drivers.

Two petrol-powered versions are available - a 2.2-litre and a 3.2-litre flagship. We drove the 3.2 JTS V6 – and its styling is as stunning as ever.

The addition of discreet Prodrive-badged flares to the front wheelarches, plus an SV6 emblem on the C-pillar and a 10mm reduction in ride height, gives the S an even more sporty look than the standard Brera.

This is complemented by the four chrome exhausts, which have been remodelled to match the model’s rear lights. The lightweight 19-inch alloys are the stand-out feature, though, and are inspired by the wheels on Alfa’s 8C Competizione supercar. They don’t only look good; the rims also play a big part in lowering the car’s weight, which helps improve its handling.

Climb inside, and the stylish cabin matches the sleek exterior. Everything has been upholstered in black leather and finished with red stitching. Aluminium plates on the front headrests feature both the Italian and British flags, and add to the impression that you are driving something special. What’s more, the pedals have been given a sporty aluminium finish.

The low driving position suits the car’s character, and fills you with confidence when dealing with the twisty A and B-roads for which this Brera has been designed. All of the dials and instruments are typical Alfa, and are emphasised by red LEDs.

While the rear seats are only really suitable for small children, the deep 300-litre boot will comfortably hold a set of golf clubs. Practicality is boosted by a split-fold function on the seats in the back. Both engines have been left untouched, so the focus of Pro-drive’s improvements is the chassis. The Brera has been criticised in the past for its lack of steering feedback and nose-heavy handling, but these issues have been addressed in the new car.

Spring rates have been stiffened by 50 per cent, and the dampers revised to improve body control. The suspension geometry has also been fine-tuned to enhance the steering and hand-ling, while Alfa has managed to slash the kerbweight by 100kg to 1,550kg.

The result is more agility and better balance in corners, and although the Brera is front-wheel drive, Alfa’s Q2 limited-slip differential ensures traction isn’t lost when you apply more power. Yet this improvement in bends has not affected the Brera’s grand touring abilities; it still makes light work of long motorway trips.

The 3.2-litre V6 sounds fantastic throughout the rev range, and offers plenty of power all the way to the red line. While engine performance hasn’t been increased, the V6 still produces 260bhp and a punchy 322Nm of torque, and propels the coupé from 0-62mph in seven seconds exactly.

Production of the S is going to be limited to 500 models, finished in a choice of red, grey or black. And for exclusivity, each buyer will be supplied with a unique certificate stating their car’s individual number.

Both models are priced very competitively, with the 2.2-litre version starting from £24,950 and the 3.2-litre at £28,450. However, the sky’s the limit when it comes to personalisation. One option is to send your car back to the factory in Italy and have it resprayed in custom 8C Competizione paint for £7,000! And there’s nothing to suggest some dedicated customers won’t do exactly that.