It's the sports car that turns as many heads as a Ferrari, yet costs less than 30K. Meet the all-new Alfa Romeo Brera 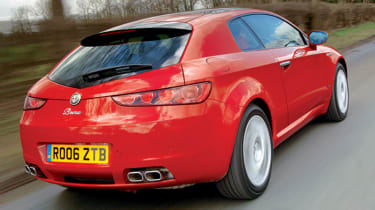 Past Alfa coupés have offered buyers plenty of style, but poor build quality and average dynamics took the shine off their looks. The Brera is a new dawn. Not only is it well put together, it also provides a driving experience that's both comfortable and sporty. The new diesel is brilliant, too. If you want a usable, great-looking coupé, the Brera should definitely be on your list.

Not only is the Brera beautiful to look at, but it also promises to bring levels of quality previously reserved for its German rivals, and banish Alfa's poor customer service reputation, too. Last year, the company cut ties with 11 dealers which failed to come up to standard, and for 2006 the firm is benchmarking itself against the service provided by market leader Lexus.

All of this is vital at every level of the ownership experience - but particularly when it comes to a car such as the Brera. As Alfa's replacement for the old GTV, it's pitched against the new Audi TT, BMW's forthcoming 3-Series Coupé, as well as the Nissan 350Z and Mazda RX-8. We sampled the newcomer in Italy in Issue 883, but how does it fare on UK roads? Auto Express got behind the wheel to find out.

Carrying on Alfa's rich tradition of gorgeous cars, the Brera is absolutely stunning. It has lost none of the drama that made the original Giugiaro concept such a hit with visitors to 2002's Geneva Motor Show, and the angled front, chunky rear and sweeping profile look fabulous in the flesh.

It's obvious as soon as you heave open the heavy driver's door that the Brera is well put together, too. And this feeling continues when you slide into the sculpted leather seat, glance at the brushed aluminium console and run your finger over the soft-touch dashboard. With reach and rake-adjustable steering, most people will be able to get comfortable, although if you are over six feet tall, headroom is a touch limited. The two rear chairs are pretty much useless for adult passengers, too, but the 300-litre boot is deep and the back seats can be folded flat.

Still, most buyers won't be worried about practicality - they will be more concerned that the newcomer drives as well as it looks. And on that count, it very nearly does. The old GTV was blighted by a terrible ride, but the newcomer is firm yet compliant, even on bumpy UK B-roads. What's more, there is a pleasing and weighty feel to the brakes, gearchange and steering.

While the Brera may not be as sharp to drive as a 350Z, it turns into corners keenly, has plenty of grip and is fun on twisty roads. Adding to the experience is the firm's latest 200bhp 2.4-litre JTD diesel unit, which combines a characterful, hard-edged five-cylinder rumble with punchy in-gear performance, thanks to 400Nm of torque. With decent refinement and 41mpg it allows the Brera to play the role of the sporty GT well.

For those who can't grasp the concept of a diesel-powered Alfa coupé, the Brera is also available with two petrol motors - a 2.2-litre four-cylinder producing 185bhp and a 260bhp 3.2-litre V6. The same engines will appear in the Spider convertible variant when it arrives in the summer.

As with the new 159 saloon, the Brera is a fine all-rounder that deserves serious consideration alongside class-leading contenders from Germany and Japan. But the most impressive feature is that the beauty of Alfa's models is now more than skin deep.