Alpina to grow hot diesel range with D7 and XD7

BMW tuning experts at Alpina are upping their efforts in the big diesel field with performance versions of the 6 Series, 7 Series and new X7 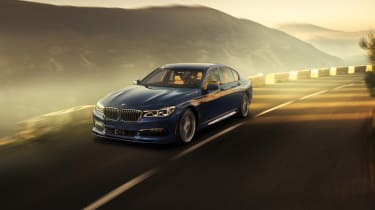 Alpina is set to rapidly expand its line-up with diesel versions of the 6 Series and 7 Series for the first time, and a high-performance diesel edition of the forthcoming X7 large SUV.

The Bavarian brand, which produced retuned BMWs that are made on the main production line by approved technicians, has enjoyed success with diesel versions of the 3 Series, 4 Series and 5 Series - and it introduced its first SUV, the diesel-powered XD3, back in 2013.

Now a series of patent applications, issued last week by a German firm specialising in property law, have revealed that Alpina is hoping to register D7, D7S, D6S and XD7 - raising the possibility that potent diesel engines could be added to the larger models in the firm’s line-up.

The D7 and D6 models are relatively straightforward choices for Alpina, because the firm already produces the B7 and B6, so it already has chassis and bodywork modifications complete.

The choice of engine is more complex. It is conceivable that the D6 and D7 could stick with a retuned version of BMW’s latest B57 3.0-litre twin-turbodiesel, as already seen in the BMW 740d xDrive - or even an adapted version of the slightly older N57 unit that is already used by Alpina in the 5 Series-based D5. 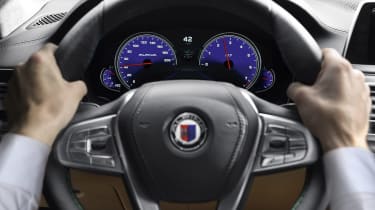 The applications for D7S and D6S hint at even more potent variants, and these cars could be the first Alpinas to feature BMW’s newly launched quad-turbodiesel engine. The German brand’s most powerful diesel engine ever, the 3.0-litre unit produces 394bhp and 760Nm in the 750d xDrive - but Alpina’s more adventurous exhaust technology could potentially ramp those figures up further.

The decision to register XD7 is a more controversial one, since it suggests Alpina is going to expand its SUV line-up - a move that is said to have been the subject of intense debate between the company’s founder Burkard Bovensiepen and his son and current boss Andy Bovensiepen.

Based on the nomenclature of the XD3, this car is likely to be a version of the forthcoming X7 - a Range Rover-rivalling large SUV that shares many components with the 7 Series. BMW plans to offer the car in a variety of seating configurations, so the XD7 could also become the first Alpina seven-seater.

An Alpina spokesman denied that the registrations mean the new models are planned. "The nomenclature of Alpina model designations is based on the logic of combining the letters D and B with the corresponding BMW Series number. We are looking to continue to use this nomenclature for many years to come and it is normal and safe business practice to register any number of model designations with the WIPO in order to reduce any complications that may arise in the future."

He added, "This explicitly does not mean that those model designations currently registered reflect future model plans; it's more a case of 'better safe than sorry'."

Is a big diesel Alpina your cup of tea? Let us know in the comments section below...