We get behind the wheel of the new Alpina B6 Bi-Turbo coupe, which gets 532bhp and 730Nm 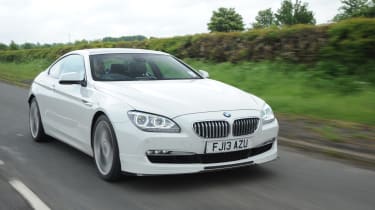 Alpina may be a niche brand, but the B6 Bi-Turbo is by far the best 6 Series we’ve driven. Faster and more characterful than the M6, yet cheaper and more efficient, it strikes a fine balance between long-distance ability and sharp handling. As with the BMW, it comes as a coupe or drop-top, and it feels even more special inside. It’s the one we’d recommend.

Alpina has been building fettled BMWs for more than 40 years, and the B6 Bi-Turbo is its attempt at an M6 rival.

This is all fed to the rear wheels to give 0-62mph in 4.3 seconds – a tenth down on the M6 – and a near-200mph top speed. The rush of in-gear acceleration is staggering, while a clever fuel shut-off system ensures each upshift is followed by a rumbling exhaust burble.

Bespoke springs and tuned damper settings broaden the scope of the standard 6’s dynamic ability. In Comfort mode the ride is more supple, but in Sport and Sport+ it feels even firmer and more focused. A 55kg lighter kerbweight adds an extra layer of agility to the B6’s fantastic all-round abilities.

When cruising, this car is a seriously accomplished GT; there’s space for four (just) and a generous 460-litre luggage area. The interior is hushed and rough motorway surfaces are serenely smoothed out.

Luxurious touches such as the dark purple dials and hand-stitched leather seats add a real sense of occasion inside. The best news, though, is that the B6 starts from £970 less than the BMW M6, at £92,850.

Stacking the cards even further in the Alpina’s favour is the fact that it’s more economical than its counterpart. The lower kerbweight and eight-speed auto box – the M6 has seven gears – allow for 30.1mpg. The 6 Series manages only 28.5mpg.

Admittedly, you’ll have to do without the ‘M’ badge, but if you’re considering buying an M6, the Alpina is good enough to make you think twice.