Test mule for Aston's exclusive Zagato-styled Vanquish spotted out and about, after production officially confirmed 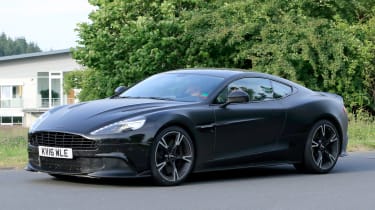 After Aston Martin confirmed to the world that it would build very limited numbers of the new Vanquish Zagato, our spy photographers have caught a prototype out testing.

Production of the Zagato was announced just after the exclusive Concorso d’Eleganza event at Villa d’Este in Italy last month. Just 99 will be built, with each commanding a price believed to be upwards of £500,000 - more than double that of the standard Vanquish.

The prototype might look like a fettled version of the standard Vanquish, but senior Aston sources have confirmed to Auto Express that the cars are test beds for the uprated powertrain and chassis from the Zagato. The finished product will use the radically altered bodywork of the show car. 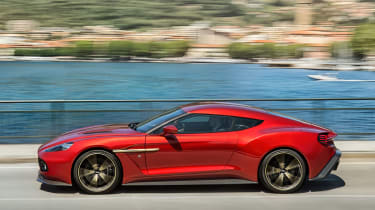 Both mules in these images sport quad exhausts like the concept, supporting the Zagato's power gain. Under the one-piece carbon fibre body hand crafted by the Italian coachbuilding firm, it still uses Aston’s venerable 6.0-litre V12 engine. Here it develops 592bhp though – that’s 24bhp up on the standard Vanquish.

Also visible is a tweaked lower bumper design at the front and a new diffuser at the rear, showing Aston is testing the aerodynamic abilities of the Zagato. The presence of a Vanquish Volante convertible is a puzzling one, but the source is adamant it's there purely to test the powertrain  - only coupes will be built.

The cost of the Zagato doesn’t appear have put off buyers because Aston has confirmed that all 99 models have already been sold . Customers are due to take delivery early next year. 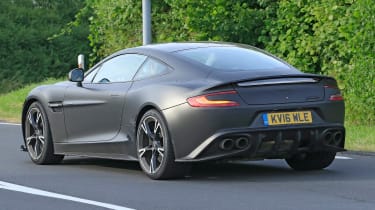 The decision was made to put the car into production due to “unprecedented customer demand” Aston received following the car’s unveiling, while the final models will be a “close representation” of the concept seen at the glamorous Villa d’Este show on the shores of Lake Como.

Official performance figures haven’t been confirmed, but Aston is predicting a 0-62mph time of around 3.5 seconds – which is three-tenths of a second quicker than a standard Vanquish.

The Vanquish Zagato is one of many projects Aston and the Italian coachbuilding company have worked on over the past five decades. Previous collaborations have included the V12 Vantage Zagato of 2011 and the divisive DB7 Zagato of 2002, both of which were also put into limited production.

What do you think of this new Vanquish special edition? Leave us a comment below!