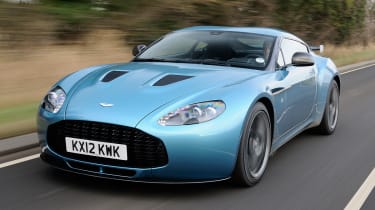 For a rebodied V12 Vantage, the V12 Zagato is a bit pricey, but for those who can afford it, it’s a spectacular piece of kit. We think the Zagato’s design is a big improvement over the standard car’s – and that’s really saying something. The driving experience is brash and loud, but oozes character. If you want one, be quick: half of the 101 cars have been sold.

Has Aston Martin pulled a fast one? Under the voluptuous bodywork, the V12 Zagato is mechanically identical to the V12 Vantage coupe, yet it costs about three times as much, at £396,000. So is this the rip-off of the century, or something genuinely worth the extra cash?

You’ll know the answer the moment you lay eyes on the Zagato’s intriguing combination of soft curves and brash aero aids. The bespoke bodywork is handcrafted from aluminium and carbon-fibre, takes over 2,000 man-hours to complete and features a few traditional Zagato trademarks from over the years. The double-bubble roof and rounded front end, for example, have featured on pretty much every Aston-Zagato collaboration.

Inside, the Vantage has remained almost unchanged. Differences include a carbon-fibre centre console and a special wave stitching pattern on the seats, doors and headlining. This is repeated by the heated rear screen filaments, giving a dramatic view out the back.

Anyone who’s been anywhere near a regular V12 Vantage will appreciate that putting such a big engine in such a small car makes it an absolute hooligan to drive, and the same holds true here.

Push the Sport button – which sharpens throttle response and boosts exhaust noise – and switch the traction control to either its intermediate Track setting or off completely. The Zagato’s rear end will then try to break traction at every possible opportunity. On the right roads, this car is huge fun, but always demands your full attention.

There’s a physicality to the driving experience, too, which is something that’s been lost by the latest breed of easy-to-use supercars such as the Audi R8 and Nissan GT-R. And there’s a hint of TVR to how the Zagato’s small Alcantara-covered gearlever needs to be moved with some force to find the next gear.

The steering has a quick ratio and lots of feel, so you can place the car precisely on the road, and thanks to a shorter wheelbase, it feels more nimble than the Vanquish. The downside is you can sense the weight of that big engine under the bonnet, which can result in sudden understeer on slippery roads.

When you can find enough traction, the acceleration feels incredibly quick, although next to cars like the Ferrari 458 and McLaren 12C, the Zagato’s 4.2-second 0-62mph time and 190mph top speed aren’t very impressive. But there’s a sense that emotion has taken priority over number-chasing with this car, so whether you’re gazing at it on your driveway or pelting across the countryside, you’ll be grinning away madly as it gets your adrenaline pumping.

Which brings us back to the question of whether the Zagato is worth that astronomical price tag. Objectively, the answer is no – you can buy a car for a third of the price that feels the same from behind the wheel and still looks great. Nevertheless, after you’ve spent some time with the Zagato, it’s hard not to fall under its spell.