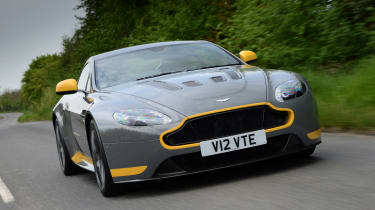 The Aston Martin V12 Vantage S has always been a special car. The big-engine, small-body setup continues to thrill, while the addition of a dog-leg manual adds another degree of involvement. That new gearbox offers a level of engagement so pure that you’d be mad not to spec it – especially as a no-cost option. The purists will be pleased.

Driving nuts the world over are in mourning for the manual gearbox, which is slowly dying as more and more manufacturers transition to slick-shifting automatic gearboxes - which can now claim to be as efficient as a manual car, but with far quicker shifts that could ever be possible with a gated gearbox.

But not Aston Martin. While the brand has long been fitting clunky automatics to its most successful models, it continues to satisfy enthusiasts with sweet-shifting manuals – and this V12 Vantage S is the latest car to get that special treatment. 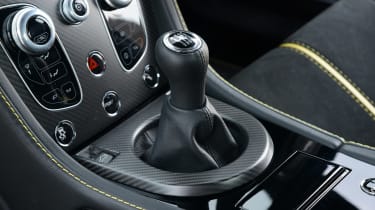 However, unlike any Aston Martin that’s gone before, this Vantage S gets an all-new seven-speed manual. Aston claims to be ‘unashamedly championing classic tradition’ with its new dog-leg gearbox – an echo to the past that will be welcomed by driving enthusiasts the world over.

What that means is that first gear sits where you’d expect second to be, and second in place of third. The tight ratios slot in with a rewarding snick, and the short throw allows you to string together a series of fast changes as the revs crescendo toward the redline. 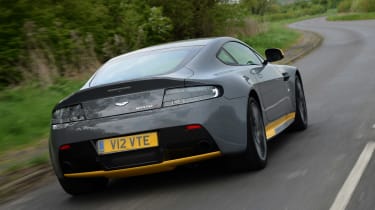 With a soundtrack that’s simply second to none, the V12 Vantage S just begs to be revved, while holding on to the gears is even easier given the manual box. Lift off and you’ll find the Aston has lost none of its charm as it pops and bangs on the overrun.

Aston has also introduced something it calls AMSHIFT for the manual gearbox. Hold the Sport button on the centre console to initialise the system and the transmission will blip the throttle on the downshift for slicker changes. It uses a series of sensors connected to the clutch, gear lever and propshaft, to mimic the artful technique of heel and toe gear changes. 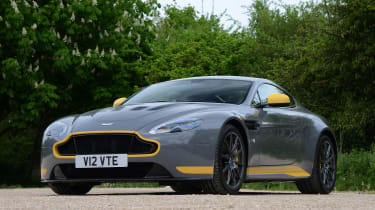 It allegedly facilitates full-throttle upshifts, too, but that sequence requires plenty of practice, as your natural reaction is to lift off the throttle as you dip the clutch. It’s plausible in theory, but a bit of a gimmick in reality.

Performance is unchanged from the Sportshift auto V12 Vantage S, meaning the baby Aston can sprint from 0-62mph in just 3.9 seconds and hit a scarcely believable 205mph flat out. Two decades ago, those numbers challenged the supercar elite but today, when you drive the V12 Vantage S, they actually feel rather conservative.

The steering remains perfectly weighted and progressive through faster bends. It’s incredibly agile and until we test the new DB11 in full later this year, it retains its crown as the finest handling Aston Martin. The adaptive damping system works well, too, though here in the UK you’d be hard-pushed to find a road smooth enough to warrant the firmer Sport setting. In fact, Normal mode does a decent job of softening the springs while also keeping things in check. 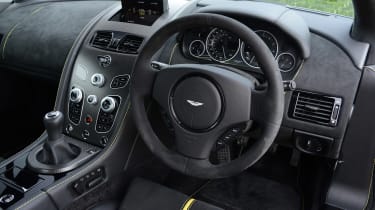 As with the automatic car, the V12 Vantage S is more than happy to slip and slide if you turn all the safety systems off. More experienced drivers will revel in the car’s adjustability, too – something that’s only heightened by the increased control offered by the new transmission.

Elsewhere, the Vantage range has been given a series of updates for the 2017 model year. While our car featured the now dated AMi II infotainment system, customer cars will use the new AMi III setup. This integrates better graphics, a faster processor and advanced traffic information, as well as Apple CarPlay for the first time. 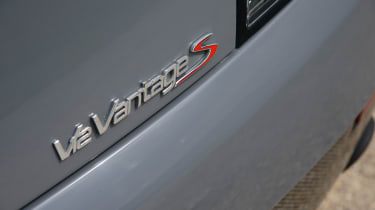 A new Sport-Plus Pack option is also available, which adds accent colours to the front grille, side sills, mirror caps and diffuser blades as on our test car. It also adds contrasting stitching to the interior and the ten-spoke graphite wheels. While it won’t be to all tastes, it adds a bit of excitement to what is essentially an 11-year-old car.

Gimmicks and stickers aside, though, this new manual gearbox transforms the V12 Vantage S from a great car into a truly brilliant one. Aston boss Andy Palmer says the manual gearbox remains an “integral part” of the company’s product plans and will do for “many years to come”. Well let us be the first to thank you, Andy. And long may it continue.