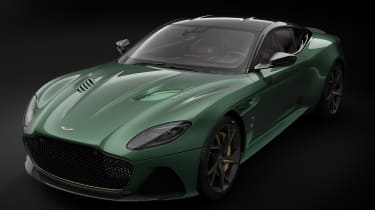 Aston Martin has revealed the DBS 59: a special edition version of the DBS Superleggera limited to just 24 units.

Both the number produced and the number in the name are appropriate: the DBS 59 will be produced to commemorate the brand’s 1-2 finish at the 24 Hours of Le Mans in 1959.

The DBS 59 features a range of styling tweaks which pay homage to the victorious DBR1 racers; most notable of which is the Aston Martin Racing Green exterior paint. The roof and rear lip spoiler, meanwhile, are finished in carbon fibre, while various badges, the front grille surround and wheel spokes are highlighted in bronze.

The exterior changes are rounded off with special graphics, a Union Flag Aston Martin logo and a numbered roundel on the front wing which denotes the model number of the limited run. 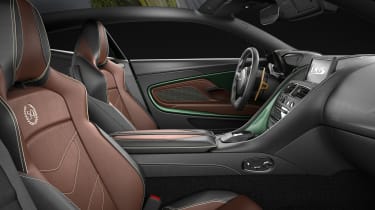 Inside, the DBS 59’s upholstery is a mix of tan and black leather, stitched together with contrasting bronze thread. ‘59’ logos are sewn into the headrests which, like the shift paddles, are finished in a bronze shade. Both the seat backs and the door inserts are finished in a fabric inspired by the DBR1.

Perhaps most eye-catching, however, is the car's unusual headlining. According to an Aston Martin spokesperson; “the DBS 59 features a unique headlining, showcasing the iconic DBR1 as it races on track. Using Q by Aston Martin’s printed leather option, the design creates a striking visual throughout the car’s interior”.

Each DBS 59 comes with a range of exclusive accessories, including a rear compartment furnished with helmet pods to hold bespoke DBS 59 crash helmets. A retro race suit and gloves are also included; their blue colour is modelled on the overalls that Carroll Shelby used while driving the 1959 race-winner. The extras are rounded off with a bespoke two-piece luggage set.

Mechanically, the DBS 59 shares the same 715bhp twin-turbocharged V12 engine as the standard car; enough to propel the DBS from 0-62mph in 3.7 seconds and on to a 211mph top speed.

The limited run of DBS 59 models are available to order now. Prices have yet to be confirmed, but expect to pay more than the £225,000 asking price of the regular car.

What do you think of the modifications on the DBS 59? Let us know in the comments... 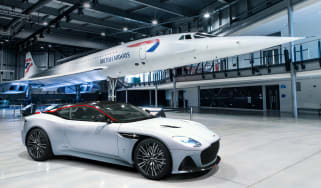 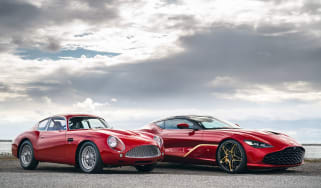