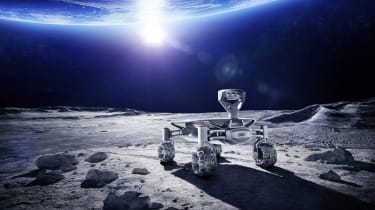 Audi is capitalising on last night's 'supermoon' lunar eclipse by setting its own sights on the night sky with the Audi Lunar Rover Quattro. It's a working, solar-powered moon exploration buggy developed to compete in the prestigious Google Lunar X-Prize space race.

With the VW-Group brand providing technical knowhow and sponsorship, a small German team called Part-Time Scientists have created the Luna Rover Quattro competition entrant. They're one of 15 teams left in Google sponsored race to get their purpose-built vehicle on to the moon. The unmanned Audi is scheduled to be fired onto the Moon's surface before the end of 2017.

Although it's about as far away from an earth-going Audi as it's possible to imagine, the Lunar Rover Quattro uses familiar tech such as a Quattro powertrain, piloted driving systems and lightweight construction. An adjustable solar panel powers a lithium-ion battery pack and four individual electric motors in the wheel hubs. It's only capable of 2.2mph, but that's plenty to deal with the moon's craggy surface and low gravity conditions.

A distance of 500 meters will be travelled on the Moon's surface, a contrast to the 240,000 miles travelled on the five-day journey. It'll transmit high definition footage from the surface for scientists to gather extremely detailed data.

The Google Lunar X-Prize (also referred to as Moon 2.0) was organised to pick up where NASA left off, and let private teams and individuals prove their lunar expertise and get their robotic vehicle onto to moon. If no team can provide a concrete launch contract by the end of the year, the competition will be null and void so time is of the essence.