The Audi R8 V10 Rear Wheel Series (RWS) has been shown at Frankfurt. 999 models will be built 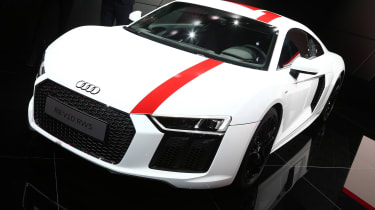 The Audi R8 range has been expanded at the Frankfurt Motor Show with the introduction of a rear-wheel-drive version of its flagship supercar. The R8 Rear Wheel Series (RWS) is the first R8 to break free of the firm’s quattro all-wheel-drive set-up. Audi plans to build 999 examples of the R8 V10 RWS, although there will be a mix of Coupe and open-top Spyder variants planned.

According to Audi Sport boss Stephan Winkelmann, “The R8 V10 RWS is made for purists, a limited-edition special model for customers with an appreciation for essential driving enjoyment, the R8 V10 RWS is an absolutely exclusive offer.” 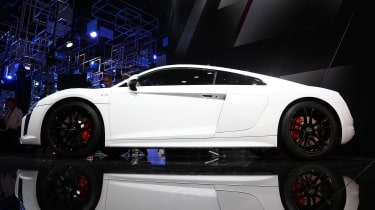 The R8 Mk2’s trademark 5.2-litre V10 sits behind the passenger compartment and develops 533bhp and 540Nm of torque. That's less powerful than the Lamborghini Huracan LP 580-2.

Audi claims that the rear-wheel-drive R8 is capable of 0-62mph in 3.7 seconds. That's two-tenths slower than the quattro-equipped R8, while the RWS has a top speed of 199mph. The Spyder variant is slightly slower, managing 0-62mph in 3.8 seconds and with a claimed 198mph top speed.

Removing the 4WD system from the R8 has saved 50kg from the Coupe’s kerbweight, while the Spyder is 40kg lighter than the quattro equivalent. Neither car is more economical, though with a quoted combined figure of 23mpg. 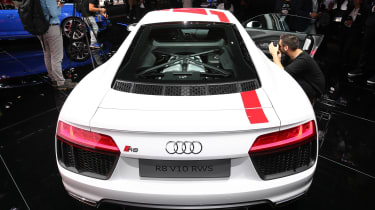 There's more to the R8 RWS than simply removing the propshaft and front driveshafts. There are chassis and suspension tweaks designed to make the most of the rear-drive layout. For example, the adjusted traction control system boasts ‘Dynamic’ and Sport’ settings that are created with controlled drifts in mind.

In terms of appearance, the RWS models are marked out by black 19-inch five spoke wheels, a matt black front grille, gloss black sideblade panels on the Coupe and body-coloured lower blades, and an optional offset red racing stripe running over the car to the rear. Inside, a special plaque reads “1 of 999”.

Are you pleased to see the Audi R8 with rear-wheel-drive? Let us know below...