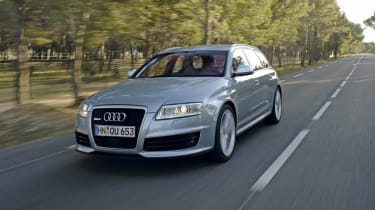 The RS6 is a technological tour de force. By packing supercar performance into a practical family wagon, Audi has created a car of considerable character. It’s not as sharp to drive as a traditional sports car, but it serves up plenty of thrills, and the V10 engine is a masterpiece. However, despite all of its achievements, there’s still a nagging suspicion that a £78,000, 572bhp estate is the answer to a question that nobody asked...

In the early Eighties, Audi redefined the sports car with the Quattro. It had a powerful turbocharged motor, grippy all-wheel-drive chassis and room for four. Other performance cars were instantly made to look old-fashioned. Now, more than 20 years later, the German manufacturer is aiming to do it all over again with the RS6 Avant.

At first glance it may look like a standard load-lugging A6, but don’t be fooled. Underneath the family-friendly exterior lurks a 572bhp monster with performance to worry a Porsche 911 Turbo, not to mention Audi’s very own R8 supercar!

On closer inspection, it’s clear that the RS6 is no ordinary wagon. At the front is Audi’s familiar gaping grille, but the chrome surround now has a satin silver finish. A deeper bumper and R8-style LED headlamps complete the changes to the nose.

At the back there’s a diffuser below the bumper, twin oval exhausts and, of course, a spacious load area. This features a power-operated tailgate that opens to reveal a boot with 565 litres of luggage capacity.

The cabin also mixes sporty touches with practicality. It seats five in comfort, is beautifully finished and luxuriously appointed, with leather trim for the seats and carbon fibre inserts in the doors and dash.

There are two heavily bolstered Recaro chairs up front, plus bold RS6 logos for the seats and on the rev counter. The driver also gets a thick-rimmed, flat-bottomed steering wheel, plus alloy trim for the pedals and gearshift paddles which operate the six-speed Tiptronic transmission.

Turn the key in the ignition, and the 5.0-litre V10 erupts into life before settling into a deep burbling idle. The powerplant is based on the unit found in the Lamborghini Gallardo, but has been fitted with twin turbochargers to give a maximum output of 572bhp. There’s also 650Nm of torque available from only 1,600rpm.

As a result, the RS6 makes light work of its 2,025kg kerbweight, and accelerates with explosive energy. The 0-62mph sprint takes a blistering 4.6 seconds, while in-gear acceleration offers rapid overtaking potential. Top speed is electronically limited to 155mph, although the firm claims that the Avant is capable of 175mph when derestricted.

With all of this performance on tap, Audi’s engineers have worked hard on the car’s chassis. As with all RS models, the quattro four-wheel-drive system is set up with a 40:60 front to rear torque split. This is enhanced by Dynamic Ride Control, which features Comfort, Dynamic and Sport settings for the dampers.

On the road, the RS6 demonstrates surprising agility, gripping strongly even in adverse weather conditions and offering a supple ride. It only becomes crashy if you select the hardcore Sport suspension mode. However, if you start to push hard in tighter turns, the combination of all that power and bulk means the nose runs wide too readily. The steering could also do with more accurate weighting.

There’s no doubting the RS6’s enormous pace, but it’s difficult to see how it’s worth nearly £10,000 more than an M5 Touring. However, it’s a stunning achievement, and one that remains true to the original Quattro’s ‘supercar for all seasons’ spirit.

For an in-depth buyer's guide on the Audi RS6 from Classic and Performance Car click here...