For many, the attraction of owning a convertible is to feel the wind in their hair. If that's you, then be careful with Audi's new S4 Cabriolet, as it has enough grunt to blow your barnet clean off! 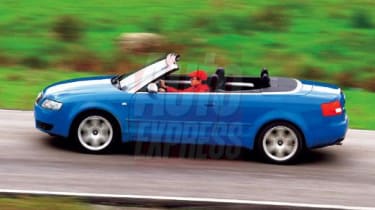 The S4 Cabriolet is one of the finest performance soft-tops around. Its stiffened body means it loses little to the saloon in terms of high-speed ability, both in a straight line and through bends. It's not cheap and it promises to be expensive to run, but for sun-worshipping driving enthusiasts, Audi's roofless new performance car could be just the ticket.

For many, the attraction of owning a convertible is to feel the wind in their hair. If that's you, then be careful with Audi's new S4 Cabriolet, as it has enough grunt to blow your barnet clean off!

Powered by the same small-block 4.2-litre V8 as Audi's recently launched S4 saloon, the convertible can sprint from 0-60mph in only 5.9 seconds and has an electronically limited top speed of 155mph. And as with the soft-top's stablemate, Audi has gone for subtle sophistication over pretentious performance add-ons. From a distance, the S4 could easily be mistaken for an ordinary A4 Cabriolet.

The only visual differences between the newcomer and lesser models are its aluminium door mirrors, 18-inch Avus alloy wheels and front mesh grille, wearing discreet S4 badging. Xenon headlamps are standard, while inside the car gets supple Recaro leather-trimmed sports seats, grey instruments plus a carbon fibre facia and door inlays.

It's an attractive package, and one made even more desirable by its electrically operated roof, which is among the most efficient in its class. The top is lowered at the touch of a button, and falls silently into its stowage area. With the hood latched in place, the S4 feels snug and accommodating, with very little additional wind noise compared to its saloon sister.

The V8 engine is also a bonus. Its 343bhp is delivered to the tarmac with impressive grip thanks to the standard quattro four-wheel-drive system, while we have said before that it's one of the sweetest-sounding units on the market. It also has immense torque, delivering 410Nm at 3,500rpm. That means you can leave the box in a high ratio and still have enough poke to accelerate out of any situation, while cruising in sixth gear is a relaxed affair. Only the fuel economy lets the car down - drive it enthusiastically, and you'll struggle to top 20mpg.

The S4 saloon has a reputation for a fairly hard ride, and the same applies to the Cabriolet. The body has been stiffened to compensate for the lack of a metal roof, and the thumps from the suspension are amplified even further by the soft-top's rigid underpinnings. But the trade-off for the harsh ride is excellent handling. The steering could feel a touch more positive, but the S4 sticks to its line religiously if pushed hard, with only the merest hint of understeer and very little body flex.

At £40,275, the convertible is aimed at a rather exclusive market, and is expected to sell in limited numbers in the UK. Even so, there's already a waiting list for the first few vehicles, which are due to hit Britain next month. As a direct rival to the M3 Cabrio, it looks like it could be BMW's bosses who will soon be tearing their hair out...