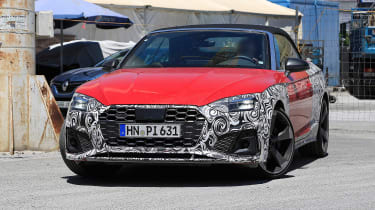 This is our first look at the facelifted Audi S5 Cabriolet. Like Audi’s forthcoming S5 Sportback facelift, it’s set to feature a range of styling tweaks, an updated infotainment system and a mild-hybrid diesel V6 engine. We expect the facelifted S5 Cabriolet will make its debut at this year’s Frankfurt Motor Show, before going on sale in 2020.

This Audi S5 Convertible prototype features large alloy wheels, LED headlights, quad-exit exhausts and an aggressive body kit, with a deep front splitter and wide side skirts. Inside, the Volkswagen Group’s 12.3-inch digital instrument binnacle will be fitted as standard, along with an 8.8-inch infotainment system and touchscreen operated climate controls.

It’ll be powered by Audi’s latest turbocharged 3.0-litre mild-hybrid diesel engine, producing 342bhp and 700Nm of torque. Like the updated S5 Sportback, the engine will send its power to all four wheels via an eight-speed automatic gearbox, offering a sub-five second 0–62mph sprint and a top speed of 155mph.

The S5’s 48-volt mild-hybrid powertrain comprises a belt-driven alternator starter, an energy recuperation system and a 0.5kWh lithium-ion battery pack. As well as providing extra performance, Audi claims the system will offer improved fuel economy thanks to a setting which switches off the diesel engine when coasting at speeds between 34mph and 99mph.

What are your thoughts on the new Audi S5 Cabriolet? Let us know in the comments section below…