We’re first behind the wheel of incredible Superleggera-designed shooting brake. 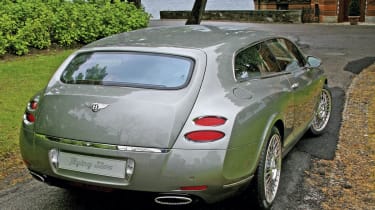 The Flying Star is a superb piece of engineering. Its beautifully crafted bodywork is a fabulous example of automotive sculpture – and so well integrated, we wouldn’t be surprised if Bentley is considering making an official version. The fact that Touring Superleggera’s work has resulted in a more practical machine – plus one that’s equally good to drive – really is the icing on the cake. The customisation does come at quite a price, although those with the required funds will no doubt take comfort that they are never likely to meet another Flying Star on the road.

Meet the most exclusive ‘estate’ car in the world. This is the Bentley Continental Flying Star – a stunning two-door shooting brake that mixes incredible looks with an equally jaw-dropping price tag of £500,000.

It’s the work of Italian coachbuilder Touring Superleggera, and having turned every head at its debut at March’s Geneva Motor Show, it’s destined to go into limited production in the next few months.

Now, Auto Express has become the first magazine in the world to drive it, at its première at the Villa d’Este Concours d’Elegance on the shores of Lake Como, Italy. Looking at the Flying Star, you would never guess that the starting point for this awe-inspiring transformation was actually the Bentley Continental GTC convertible. Technical director at Touring Superleggera, Aldo Goi, says that adapting the two-door open bodywork of the soft-top was far less complicated than replacing the roof on a GT coupé or Flying Spur saloon.

“The GTC’s added structural strength makes it ideal for the Flying Star coachwork,” he explains. There’s no shortage of risk in this type of project, though, as the end result rarely has the solid fit and finish of the original. However, the Flying Star is a success. All door closures – a particular challenge – are true.

Goi is no stranger to custom builds. “I’ve done dozens of special cars with Alfa and others over the years, but this job has been the toughest,” he says.

Several components under the GTC’s skin needed to be relocated within the Flying Star’s chassis, and the work started in September 2009, with Goi given less than six months to solve all the challenges. All added structural parts have been made of lightweight steel, while the moving parts are crafted from aluminium to remain true to the Touring Superleggera name.

Although the extended roof section is mostly fashioned from steel sheet, with thick double steel support bars hidden inside, the Flying Star is 30kg lighter than the Continental GTC. Designers are also talking about the possibility of producing a carbon fibre roof variant that would cut weight by a further 100kg, while maintaining rigidity and strength. As well as being stunning to look at, the newcomer is remarkably practical. While the Continental GTC provides a mere 260 litres of boot space, the Flying Star offers a minimum of 400 litres, which expands to 1,200 litres with the fold-flat rear seatbacks laid forward. The load floor and seatbacks are covered in tightly stitched custom leather, and the hatch is big enough to swallow the odd masterpiece.

The chrome surrounds of the cargo door and tail-lights are made of durable plated brass, while the rear LED units are taken from the Continental Supersports. Here, though, they’ve been inserted from within the new rear wing panels to sit flush with the bodywork.

Other highlights include a special set of 20-inch classic Borrani alloys with stainless steel spokes, costing £8,000. But what’s the Flying Star like to drive? Well, thanks to its lighter chassis, it’s quicker than the GTC, sprinting from 0-60mph in only 4.6 seconds – that’s the same as the Continental GT coupé.

However, that’s merely the start. After our drive, this car was due to head to Bentley’s HQ in Crewe, Cheshire, to get the full Speed treatment. That means boosting the 6.0-litre bi-turbo W12 unit to 600bhp. In short, the Flying Star soars and surges in that unmistakably Bentley bi-turbo manner. From only 1,700rpm, practically all of the engine’s torque arrives in one huge shove.

What is really surprising is the added stiffness provided by the Touring bodywork. The Flying Star is responsive, and along the very demanding lakeside B-roads of Lake Como, feels as good to drive as the Continental GT. The only difference is the sense of space in the shooting brake set-up, which feels eerily large. The side glasswork now measures 2.4 metres in length! Room in the rear seats is plentiful, too.

If the price tag wasn’t big enough, you could order the five-piece personalised luggage set – the only other optional extra Superleggera formally offers. After the Borrani alloy wheels, it’s all up to the buyer’s imagination. And that imagination starts at £510,000 in 552bhp Continental form, or £575,000 in 602bhp Speed specification.

No wonder the Flying Star is set to be so exclusive. Touring Superleggera aims to sell only 20 examples worldwide.

Rival: Aston Lagonda When the rather ungainly estate-cum-SUV Lagonda concept was unveiled at Geneva last year, it received a decidedly cool reception. Aston has promised another interpretation this year, to appeal to ultra-wealthy luxury car buyers. Let’s hope it’s as stunning as this Bentley.