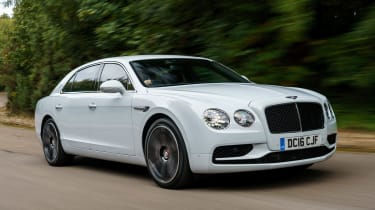 The Bentley Flying Spur V8 S has to be filed firmly under the ‘unnecessary’ category; it’s a luxury limousine that owners are more likely to experience from the rear seats, and yet it also has clear ambitions of delivering driver involvement. It’s simply too big and heavy to ever be entertaining in the traditional sense, but as a rapid, characterful big luxury saloon, with oodles of scope for personalisation, it’s a worthy alternative to Mercedes-AMG’s S63 saloon.

The Bentley Flying Spur V8 S is the answer to a question that very few us will ever be lucky enough to ask: how can one of the world’s fastest luxury four-door saloons be made even faster and even more agile?

Confused? You’re not alone. But for those who do have a Bentley in their collection (on average it’s one of eight vehicles, we’re told), the V8 S Spur is designed to offer a halfway house between the ‘entry-level’ 500bhp V8 and the full-fat W12. It mirrors the popular V8 S variant that was introduced last year in the two-door Continental GT, and – in the UK at least – that car has proven a popular option. In fact, the S is a much more popular choice than the regular V8, Bentley insiders will admit. 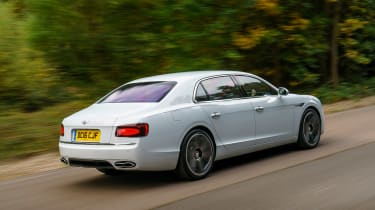 The raw stats, then, are a retuned version of the 4.0-litre twin-turbocharged V8 motor that brings an extra 21bhp and 20Nm of torque to deliver 521bhp and, from just 1,750rpm, a whopping 680Nm. There are further revisions to the transmission to help improve throttle response across the rev range. The mods trim 0.3sec from the regular V8’s 0-62mph time, taking it down to just 4.9 seconds, while also increasing the top speed to 190mph.

Bentley has chosen not to give the Flying Spur the lowered ride height of the Conti GT’s V8 S variant - this is still a limousine, after all - but there are reprofiled air suspension settings to tighten up body control on twistier roads and sharpen steering reaction on turn in.

In the most part, though, you’ll drive the V8 S in one of its softer modes and with the gear lever stuck in D, and in this configuration it has bags of charm. There’s more than enough power and torque to catapult itself along, and the gearbox – a ZF eight-speed automatic with Bentley’s own software controlling it – is smart enough to make smooth kickdowns when requested. The engine fades away quickly at speed, too; only road roar from the big tyres is likely to intrude when you’re cruising quickly down a motorway, and even this is pretty well suppressed.

Flicking the gearbox into Sport mode fences off eighth gear altogether, although it’ll be a brave person who tries to hustle the Flying Spur along in seventh. The revised chassis settings do sharpen up the big car’s reactions, making it keener to aim for the apex of a corner when you ask it to. 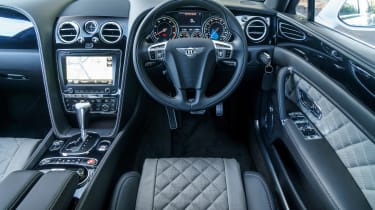 But there’s no disguising the fact that there are two and a half tonnes of car following the nose; while the body is better controlled, you can still feel the weight shifting around and sudden changes of direction are still not the Bentley’s forte. At least the ride doesn’t get too brittle – so you could happily slot the car into Sport if you were trying to make up time on a smooth, fast A-road, for example.

Contrary to popular belief, fuel economy is an issue to buyers of this type of car - though on grounds of inconvenience more than cost. Either way, the Flying Spur’s cylinder deactivation is also present on the V8 S and it helps this huge car to a claimed 25.9mpg, with CO2 emissions of 254g/km. Our test mileage was pleasingly close to this figure, too, at around 23mpg - so the 95-litre fuel tank should give you a decent range of around 450 miles between fill-ups. 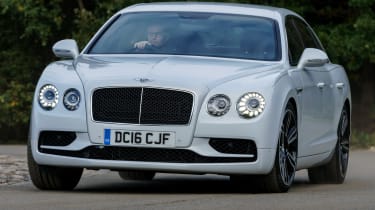 Standard kit upgrades on the V8 S include a different front grille design, a gloss-black rear diffuser and a contrasting material and colour down the centre of the headlining.

However, Bentley thrives on offering its customers a personal experience - and that extends to an option list that encourages them to open up their imaginations almost as wide as their wallets. Our test car pictured here had carbon-ceramic brakes, a Mulliner package that brings 21in alloys, diamond-quilted leather seats and sports pedals, and an extensive rear entertainment system as part of an extensive list of add-ons totalling more than £50,000.

Buyers determined to relish the opulence of a Bentley purchase will have little trouble in justifying most of the extras, though the £2,100 bill for adaptive cruise control seems a little petty on a vehicle so clearly suited to crossing continents at high speeds.