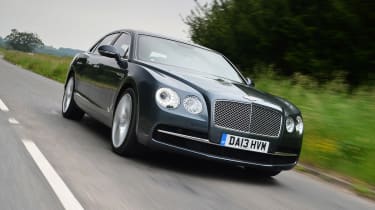 This is the best Bentley yet made under VW ownership. It perfectly fulfils the brief of a sporting luxury saloon with huge power, a decent amount of poise (for a car this size) and incredible refinement. Yet it’s still a Bentley, thanks to imposing looks and an old-meets-new interior. This is the car the new Mercedes S-Class has to beat.

Of course, Bentley will tell you they appeal to very different customers. But to our eyes, the new Flying Spur is so good, it makes the Mulsanne look and feel old, and a bit superfluous. In fact, the Spur is so good, it sets the luxury saloon standard the new Mercedes S-Class has to beat.

It’s got the quality, for sure – this is a perfectly coiffed cabin with all the trimmings you’d expect: sumptuous leather, deep pile carpets and wonderful wood. Yet it’s also fabulously contemporary in a Bentley sort of way, right down to the bevelled look to some of the controls on the touchscreen.

Okay, so the Mulsanne has the edge on space inside, as you’d expect – it’s 276mm longer although identical in width, while headroom is a tiny bit tight in the Flying Spur if your chauffeur wears a hat. However, boot space is better in the less expensive car.

But Bentleys are all about sporting luxury, and this is where the Spur really delivers. With four-wheel drive you’re never short of grip, nor does the car ever really feel its sizeable 2,475kg kerbweight.

Bentley claims 0-60mph is dispatched in 4.3 seconds, which we can easily believe despite the complete lack of drama when you floor the (beautifully crafted) throttle. You’re just pushed deeper and deeper into the wonderfully comfortable seats. The W12 engine keeps on giving, too, with an enormous 800Nm of torque.

However, we’re looking forward to a V8 version – as in the Bentley Continental, we expect it to liven up the handling a touch and provide a more enticing soundtrack. The W12 sounds just a little bit muted. As is everything – a new acoustic floor makes the Flying Spur an incredibly refined machine whether you’re in the front or back, with an almost total absence of road noise.

The ride quality, meanwhile, is perfectly judged: firm enough to provide feedback, yet pliant enough not to ruffle you. The steering’s pretty good, too. As for styling, it’s a tale of two halves. It’s handsome at the front, but too much like Bentley’s much criticised EXP 9 F SUV concept at the back – not a good thing.