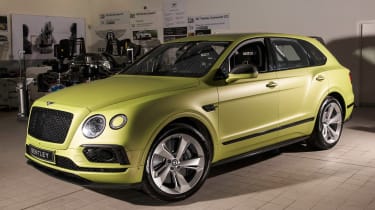 The Bentley Bentayga will face one of motorsport’s most challenging courses when it attempts to break the current SUV record at the Pikes Peak hill climb in Colorado, USA later this year. The current record is held by a Range Rover Sport and was set back in 2014.

Driven by Pikes Peak legend Rhys Millen, the lightly-tweaked Bentayga W12 will race up the hill in June – as part of the historic festival. Mullen is no stranger to victory, however, with 14 class victories and two overall victories to his name. By signing for the Brit-based manufacturer, Mullen becomes the seventh ‘Bentley Boy’; a term given to a small group of drivers who are contracted to race cars direct from the factory.

The Bentayga will only have a few modifications before tackling the infamous course. A roll cage and bucket seat have both been installed, while 300kg of weight has been stripped from the near-2.5-tonne production SUV. While the roll cage and seat have been added to boost safety, the weight loss will have the biggest benefit to the Bentayga’s outright performance. 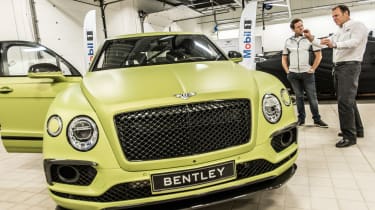 The final set-up is still being perfected by Millen and his team of Bentley engineers, with the car currently undergoing tweaks to the anti-roll bars and suspension. Millen has also increased the size of the paddle shifters of the eight-speed automatic gearbox, to make changing ratios easier on the hill.

The Pikes Peak course is notorious for its dramatic drops, hairpin turns and high altitude.  The course rises to over 14,000ft and requires Millen to use an oxygen mask to keep concentration levels at their peak.

The hill climb, dubbed ‘Race to the Clouds’, has claimed the lives of six racers throughout its history, with the last death recorded in 2015 when Carl Sorensen crashed over the edge on his motorcycle.