Volkswagen has announced its all-electric ID.R track monster will tackle more record attempts during 2020 – with the lap record at the Sonoma Raceway in California among the top targets. It’s a benchmark currently held by the Mercedes-AMG W07 – the car in which Nico Rosberg scooped the 2016 Formula One world title.

The ID.R will also return to the Goodwood Festival of Speed in summer, with the hope of setting a new, official time up the hillclimb course. The car’s famed 41-second effort at the 2019 event was set on the Saturday, making it an unofficial time. The officially recorded Sunday time was slower due to wet weather.

Volkswagen will also develop a second-generation “evolution” version of the record-breaking ID.R prototype racer. Details on the updated variant remain unknown for the time being, but we’re expecting the Mk2 ID.R will have more power, more grip and a longer range, thanks to an improved battery pack.

In June 2018, the Volkswagen I.D. R smashed the outright record for the Pikes Peak International Hill Climb, covering the 12.42-mile course in 7:57.148 minutes. The time not only broke the existing EV best by almost precisely a minute, but also the overall record of 8:13.878 minutes set in 2013 by Sebastien Loeb in the Peugeot 208 T16. 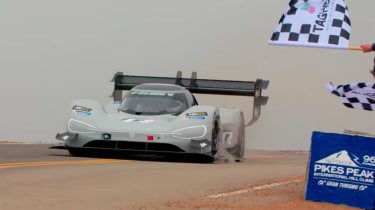 For the Pikes Peak attempt, Volkswagen fitted the I.D. R with an enormous rear wing and front splitter to compensate for the lack of downforce on offer at altitude. The time was also set despite less than ideal conditions. Parts of the track were slightly damp and cloud cover hindered visibility, but it was still enough for the first sub-eight minute run.

Almost exactly one year later, in June 2019, the I.D. R broke the all-electric lap record at the Nurburgring, setting the second fastest ever time recorded on the 12.9-mile Nordschleife circuit in the process. Volkswagen’s time of 6:05.336 minutes outstripped the old record of 6:45.900, set by the NIO EP9 hypercar in 2018. 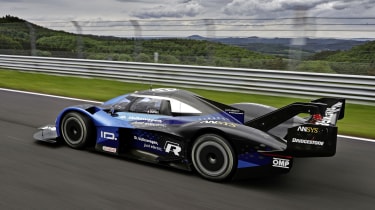 Despite Volkswagen’s crushing defeat over the Chinese startup company, the I.D. R remains some way behind the Porsche 919 Evo, which claimed the title of “King of ‘Ring” in 2018, with a time of 5:19.550 minutes. During its final attempt, the modified Le Mans racer averaged 148mph, compared to the I.D. R’s 127mph.

At the 2019 Goodwood Festival of Speed, the I.D. R broke the outright hillclimb record, with a time of 00:41.18 seconds. Volkswagen’s effort eked under the existing time of 00:41.60 seconds, set in 1999 by ex-F1 star Nick Heidfeld in a McLaren MP4/13. Before the I.D. R’s attempt, Heidfeld’s record remained unchallenged for 20 years. 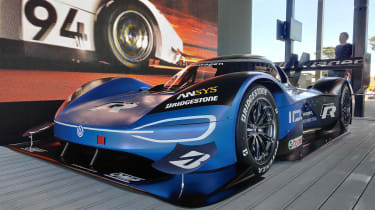 Following the I.D. R’s record-breaking Goodwood run, Volkswagen’s Motorsport Director, Sven Smeets, said: “A change is taking place in the field of production vehicles and in motorsport. Electric cars are becoming increasingly more powerful and it’s great to see them now rivalling combustion engines on track. To get an idea of how far we’ve developed the car, in 2018 we ran a 00:43.86 – this year we were almost three seconds faster.”

Most recently, the ID.R set a new benchmark time on the Tianmen Shan “Big Gate Road” mountain pass in China. The prototype racer covered the 10.906km (6.77 miles) route in 7:38.585 minutes, with French driver Romain Dumas at the helm. The course winds through 99 hairpin corners and climbs to a maximum altitude of 1,110 metres (around 3,600 feet). 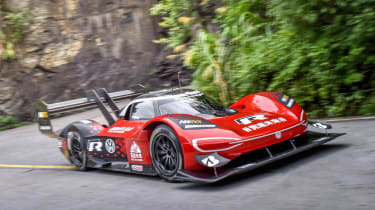 The Volkswagen ID.R is the first racer to set an official time on the Tianmen Shan pass. Official start and finish points were defined as part of the attempt, with the latter set at “Heaven’s Gate” – a 131.5-metre natural arch at the mountain’s summit. During the run, Dumas averaged 53.2mph and reached a top speed of 143mph.

The Volkswagen I.D. R is powered by a pair of electric motors (one for each axle) and two lithium-ion battery packs, producing 670bhp and 650Nm of torque. Its top speed stands at 168mph and, thanks to a kerb weight of under 1,100kg, it’s capable of covering the 0–62mph sprint in 2.25 seconds. 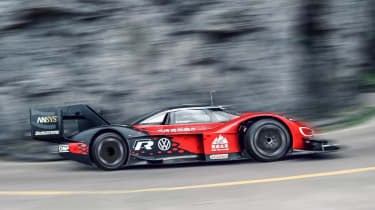 For the Nurburgring and Goodwood records, Volkswagen issued the I.D. R with a revised aerodynamic setup. In both instances, the rear wing sat far lower than the Pikes Peak version, as the car no longer needed to fight the thin air of Pikes Peak to produce a decent amount of downforce.

Other record-specific modifications include a Formula One inspired Drag Reduction System (DRS) for the Nurburgring, to allow a higher top speed for the track’s huge straight. The Goodwood-tuned I.D. R was also fitted with a considerably smaller battery, providing just enough power for the 1.16-mile course, to the benefit of weight reduction.

The I.D. R forms part of a broader VW plan to introduce dozens of electric and plug-in hybrid models by 2025, with the first production I.D. hatch set to arrive later this year. Dr Frank Welsch, Volkswagen Member of the Board of Management with responsibility for Development, said: "We want to be at the forefront of electromobility with Volkswagen and the I.D. family.”

What are your thoughts on the Volkswagen I.D. R’s record-breaking streak? Let us know in the comments section below…