Porsche has set a new all-time lap record at the Nurburgring with a time of 5:19.55s in its modified Le Mans racer, the 919 Hybrid Evo.

The lap was set by two-time Le Mans winner Timo Bernhard who managed to break the outright record at the 12.9 mile track which had stood for 35 years. Porsche set the previous record in the 956 C back in 1983 with a time of 6:11.13s.

• The Fastest Nurburgring laps ever

During the record attempt Porsche actually broke the lap record three consecutive times; laps of 5:31s and 5:24s were set before the final attempt of 5:19.55s. Porsche confirmed it would not be attempting another record today, but engineers hinted that if the track temperatures were cooler the car could go even quicker. 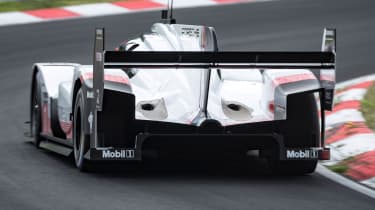 Over the course of the lap record the 919 hit a top speed of 229.28mph and covered the track at an average speed of over 148mph.

A development of the car Porsche won the Le Man 24 hours race in 2015, 2016 and 2017, the 919 Hybrid Evo is powered by a two-litre turbocharged V4 engine and two different energy recovery system. The engine drives the rear wheels, while the electric motor, powered by harvested brake and exhaust energy, drives the front axle to make it four-wheel drive.

As the 9119 Hybrid Evo has no regulations to adhere to, unlike the 919 that raced at Le Mans, Porsche was able to increase the car’s total power output to 1,160bhp. A dramatic aerodynamic makeover including the new front diffuser, larger rear wing and drag reduction systems help contribute to a 53 per cent increase in downforce.

Read: the fastest lap times ever set around the Nurburgring…