The new all-electric Volkswagen ID.3 is finally on the road, and we're one of the first to get behind the wheel 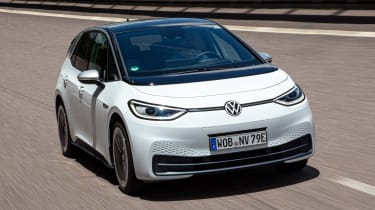 A well-balanced chassis setup, impressive range and a reasonable price wrapped up in a great looking package. Viewed from this point of view, the ID.3 truly delivers on its promise to become the Golf of the electric age. However, it’s not a perfect debut for the upcoming ID line-up. Cheap interior materials, missing functions from launch and the continued absence of the cheaper 45kWh version mean that the ID.3 has some areas to address in order to deliver its promises in full.

This is the Volkswagen we’ve been waiting a long time to drive, the ID.3, the most important new car Europe’s largest car maker has launched since the first-generation Golf in 1974.

After delays contributed not just to worldwide shutdown from coronavirus and plenty of bug-fixing required on Volkswagen’s end, the all-electric ID.3 - the brand’s first purpose built, mass produced electric car - is finally on the road. Sales begin in Europe later this month, with potential British buyers able to finalise their purchases in July, ahead of first deliveries in September.

The arrival of the ID.3 heralds the beginning of what will be a transformative period not just for the Volkswagen brand but for the VW Group as a whole. This is the company’s first real swipe at Tesla on its own turf, and to arm itself properly for the electric future, VW will invest the not so insignificant sum of €30bn over the next three years in a brand new electric car platform called MEB. 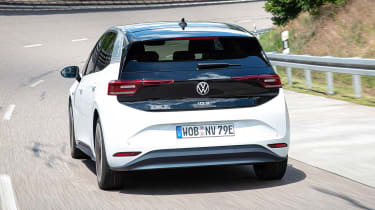 By 2025, the Volkswagen Group hopes to have 50 all-electric cars on sale across its various brands, many of which will use the new MEB underpinnings. As a C-segment family hatchback, the ID.3 is not quite a direct rival for either of Tesla’s smaller offerings - the Model 3 saloon and Model Y compact SUV. While it could appeal to Tesla buyers, it’s best to think of it as an all-electric alternative to the Golf.

From launch, British buyers will only be offered the 1st Edition Plus version of the ID.3 - set to be priced from around £39,000 before any government incentives, but with one or two features missing from day one. Software updates for features such as the head-up-display parking assistance and smartphone app connectivity will be available to download not long after the first cars hit the road. Importantly, when the entry-level ID.3 arrives it will be offered from around £27,000 - around what you’d be expected to pay for a decently specced Golf.

For ease of production, the launch version of the ID.3 is only available with one powertrain option. A 150kW electric motor drives the rear axle, providing up to 201bhp, while a 58kWh battery pack sits under the floor. Maximum range on a single charge is claimed at 261 miles. While more powerful versions aren’t planned, a cheaper ID.3 with a 45kWh battery and a claimed range of 205 miles is coming, as is a more expensive long range variant, with a 77kWh battery and up to 341 all-electric miles on a full charge.

Fast recharging can be achieved at speeds up to 100kW, enabling around 180 miles of battery power replenished in half an hour. It’s a standard feature on the 58kWh 1st Edition, but cheaper versions will likely be capped at a 50kW charge rate on a 3-phase plug. For recharging at home, the ID. Charger Connect wallbox is offered, enabling 11kW charging on a 3-phase connector, and the standard 7.2kW speed on a 1-phase plug. Either way, a full recharge overnight is possible. 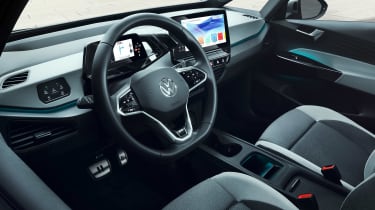 Start driving though, and one figure immediately leaps out - the 310Nm of torque, delivered instantly with a dip of the pedal. The ID.3 does 0-37mph in roughly 3.7 seconds, which is likely to even outpace a Golf GTI from a standstill. And beyond the instant burst of power we’re now accustomed to in EVs, the electric newcomer doesn’t show itself up - far from it. It accelerates smoothly and unlaboured up to motorway speeds, up to a limited top speed of 99mph. VW says 0-62mph takes 7.3 seconds in 1st Edition models by way of a small performance upgrade. Standard versions of the ID.3 will do the benchmark sprint in around 9.0 seconds.

One thing in particular that sets the ID.3 apart from the competition is not how it feels to get on the move, but how it feels to bring it to a stop. The braking system feels far more natural than in competitors. By default the ID.3 coasts with no brake or throttle input as a petrol car would, while engaging the energy recuperate system gives the one-pedal driving you get in many other electric cars. But hit the brake pedal and it feels all very normal, without the inconsistencies of other EVs. That’s because most energy is recovered not at the wheels, but well within the powertrain, by inverting the motor while coasting or slowing down.

The ID.3 sits taller than a Golf and at almost two tonnes thanks to the large battery pack it also weighs around a third more, too. However, Volkswagen’s engineers have done an admirable job with the MEB system, so the battery sits very low in the chassis of the car. As such, the centre of gravity is far lower than in other electric vehicles, and it feels lighter and more agile than you’d expect.

It rides well, too, again defying the overall weight of the car by not allowing its sheer mass to drag the ID.3’s wheels too harshly into imperfections and potholes with a thud. However, while the dynamics impress for an electric car, those coming from a petrol hatchback like the Golf may feel the extra body roll in corners. Adaptive dampers will be available at some point in the ID.3’s life and may address this. Similarly, VW says the steering will improve with a progressive setup that reduces the amount of input needed to make tight turns. 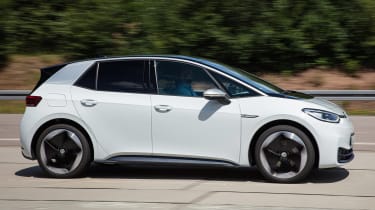 The interior of the ID.3 represents a total revolution over what Volkswagen has previously offered customers, with a decluttered dashboard relying on very few buttons. Two displays take centre stage - a large central 10-inch touchscreen, plus another tablet style display sitting behind the steering wheel in place of traditional instruments. Alongside it is the drive selector, placing everything the driver may need right at hand, given all other controls and functions are either on the steering wheel or on the central display.

Many early adopters and forward minded buyers will love the look, but perhaps not the feel of the cabin. Electric cars are made on tight profit margins, and often the first casualty of this is the interior quality. Sadly, the ID.3 is no different to others in this respect. There’s not much in the way of soft touch materials, with plenty of hard plastic weaving around the doors and dashboard. It’s beneath the premium standards the brand has set in its other cars, and a slight let-down to the touch, when the cabin looks so good to the eye.

One big advantage of going electric is the space inside though, with the small, rear-mounted motor and underfloor battery bringing important practicality gains. The ID.3 is 20mm shorter in length than a Golf, but space inside trumps its combustion powered sibling, with Volkswagen able to exploit the interior dimensions thanks to there being no engine and gearbox up front.

The wheelbase is 130mm longer, for example, because the front wheels can be pushed right up to the front corners of the car, and the windshield can be brought right forward too, creating a bright, airy and spacious place to sit. There’s no transmission tunnel running down the spine of the interior - great for space up front and in the middle of the rear bench. Up front, ancillaries for features like climate control take up all the space, so there’s no front boor. The rear boot isn’t impeded by the electric motor though. In fact, at 385-litres, there’s actually more storage space in the back than a regular Golf. It all combines to make use of space one of the most convincing aspects of the new ID.3, alongside its range and performance for the price.

As for equipment, the 1st Edition cars add not only faster recharging and acceleration as standard, but a smattering of comfort and design features over the upcoming regular versions of the ID.3. Ambient lighting with 30 colour options brightens the interior even more, heated seats are standard, as are LED matrix headlights, a leather wrapped steering wheel, and exclusive touches such as a silver exterior styling pack, 19-inch wheels, four exterior colours and three interior colour schemes to choose from. How limited personalisation options on the base car will be remains to be seen.

Show me:
First Volkswagen ID.3 models arrive in the UK 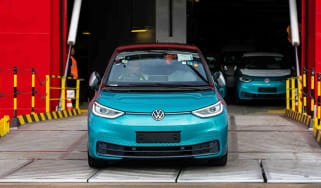 First batch of Volkswagen ID.3 hatchbacks unloaded at Grimsby, all of which are set to reach customers later this month
Skip to HeaderSkip to Content