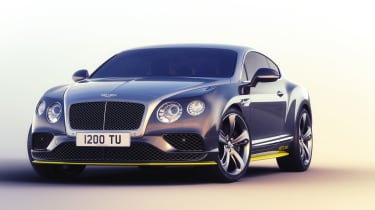 A limited run of seven Bentley Continental GT Speeds – Bentley’s fastest production car – will debut at the end of July with bespoke styling inspired by Breitling Jets. Each model will take inspiration from one of the seven Breitling Aircraft, famous for their aerobatic displays around the world.

The bodywork will incorporate a two-tone Hallmark (silver) and Onyx (black) colour scheme mirroring the Breitling L-39 Albatross jets. You also get a set of huge alloy wheels, as well as yellow details on the front splitter, side sills and rear diffuser.

Inside, you’ll find Breitling Yellow highlights throughout, and a set of bespoke quilted leather seats made especially for this new limited edition model. 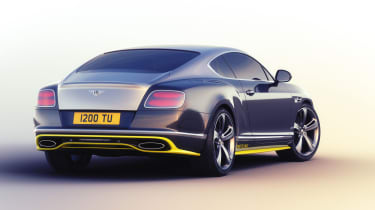 Using its Mulliner coachbuilding branch – the customisation division of Bentley Motor Company –  each unique Continental will have references to its jet twin inside and out with logos and graphics that correspond to the relevant plane in the Breitling Jet Team.

Each of the cars will be individually numbered and feature a graphic of the matching jet on the carbon fibre fascia dashboard.

All the Bentley Continental GT Speed Breitling cars feature the existing GT Speed’s twin-turbo 6.0-litre W12 engine, which pushes out 626bhp and 820Nm of torque to sprint from 0-62mph in 4.1 seconds and onto a top speed of 203mph. That performance comes at a price, though, with 18.9mpg fuel economy and CO2 emissions of 347g/km. 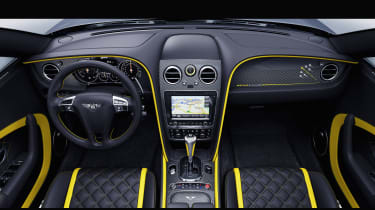 With the standard car starting at £168,300, we can expect the Breitling Limited Edition models to cost nearly £200,000. No GT Speed Convertible models are planned at this time.

The Continental GT Speed Breitling Jet Team Series Limited Edition cars will debut at the Boeing Seafair Airshow on 31July where the aerobatics squad will be performing in tandem.

Do you like the idea of a jet-themed Bentley? Let us know in the comments section below...