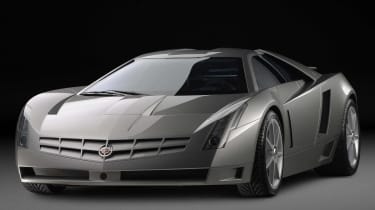 With an ageing customer base and a range of stodgy designs, General Motors needed a concept car to revive interest in luxury brand Cadillac. And what better way than with a supercar concept? Cien means 100 in Spanish, and the concept was revealed in Cadillac’s centenary year.

Power came from a 750bhp V12 that featured cylinder shutdown for light loads - although why anyone would care much about that from a 12-cylinder concept supercar is anyone’s guess. While Cadillac built a working prototype, there were never any serious plans to put it into production, although the car’s angular lines were a precursor to cars such as the CTS and Escalade. 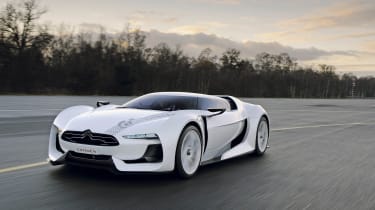 Sony’s Gran Turismo racing game on the PlayStation has pushed the boundaries of collaboration between car and game makers like no other. The GT by Citroen was a significant step in this partnership, as it was co-designed by Citroen and GT developer Polyphony Digital. Not only did it look radical, it also injected some extra desirability into the Citroen brand.

In-game, the original GT by Citroen concept car was all-electric, but there have since been petrol-powered roadgoing and race versions created, while the real GT by Citroen is powered by a Ford V8 with nearly 650bhp. 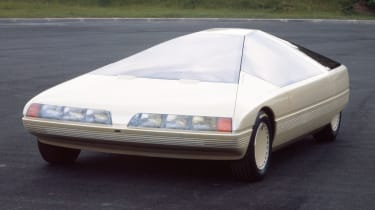 In an effort to revive Citroen’s profile in the 1980s, the Karin was created to cause a stir on the concept car scene. It was largely unconventional, with a triangular-themed design that resulted in a pyramid-shaped body, which only had room for three people to sit abreast in the cabin, with the driver in the middle.

The roof tapered to a point - so who knows how comfortable or cramped the passenger seats were - although under the skin the positively ancient DS suspension would have ensured that the Karin had a plush ride. 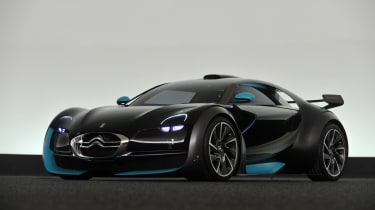 Almost a decade ago, years before the electric revolution began, Citroën was pioneering electric supercar technology. The Survolt is a carbon-fibre bodied, twin-electric-motored, go-kart-like racer with 300bhp and 480Nm of torque.

Whilst this may not sound like much by modern standards, the Survolt is sprightly enough. We had the chance to drive Citroën’s concept back in 2010, and got it up to 134mph on Thruxton circuit in Hampshire. Given enough space, the Survolt would have kept going to a maximum of 162mph, and it could cover the 0-62mph sprint in five seconds. 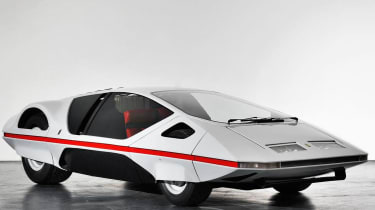 Ferrari was due to compete in the 5.0-litre Sports Car class at Le Mans and, to be eligible, the Italian mark had to build 25 examples for private sale. The Modulo was one of these homologation models, which Ferrari handed to Italian coachbuilding company Pininfarina to turn into a concept car.

The Modulo was supposed to showcase Ferrari’s design direction for the coming decade and was packed with a host of interesting features such as a jet-fighter style canopy in place of conventional doors, and fixed seats made by attaching padding to the interior.

It’s fitted with a 550bhp 5.0-litre V12, and has a claimed top speed of 220mph; but it never saw the open road. Curiously, when the Modulo was built Ferrari neglected to supply a steering system. So, while it could move under its own power, it could only move forward and backwards. 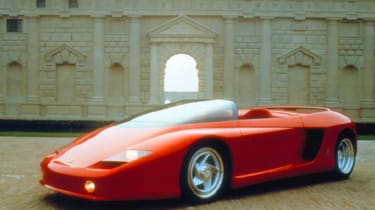 The Mythos is a two-seat sports car based on the Testarossa, which featured on Ferrari’s show stand at the 1989 Tokyo Auto Show. It’s powered by the Testarossa’s 4.9-litre flat-12 engine, producing 384bhp and 354Nm, and has a projected top speed of 180mph.

The Mythos was built without a roof or side windows, and has active aero. The rear spoiler can rise by up to 30 centimetres, and the front splitter has a vane which can move by up to three centimetres, to gain aerodynamic advantages when the car’s ECU deemed necessary.

The Mythos wasn’t supposed to be available to the general public. However, Ferrari built two examples for private use, both of which were commissioned by the Sultan of Brunei, Hassanal Bolkiah. 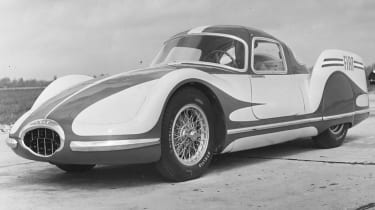 Like all the best concepts, the gas-powered Fiat Turbina comes with a rather good story. It was designed and constructed in secrecy by a three-man team in disused corner of Fiat’s famous Lingotto factory in Turin. The team knew nothing about gas-powered technology before they embarked on the project, teaching themselves everything from fluid dynamics to turbine mechanics.

The Turbina was powered by Fiat’s own Type 8001 turbine engine, developed especially for the project, producing 291bhp at 30,000rpm. It was driven by exhaust gasses passing over an impeller, connected to the rear wheels and could achieve speeds upwards of 100mph. 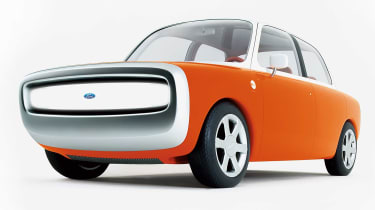 Styled by furniture and watch designer Marc Newson, the Ford 021C made its debut at the 1999 Tokyo Motor Show. It was penned with influences from Newson’s furniture and watch lines in mind, as seen in the dials, which are bespoke Ikepod units, and the steering wheel, which is styled to look like one of Newson’s coat hooks.

It featured suicide doors, a carbon-fibre body, LED headlights, swivelling front seats and a boot which opened like a bedside table drawer. Also, in place of conventional height-adjustable seats, the 021C’s dashboard moved vertically to accommodate drivers of differing heights.

For all its futuristic looks, however, it was powered by a very average engine. A 1.6-litre four-cylinder Zetec unit with 99bhp drove the 021C’s front wheels via a four-speed automatic transmission. 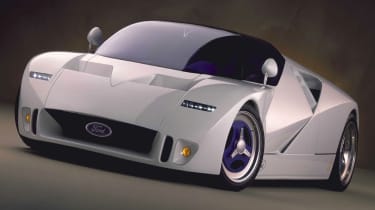 Instead of the original GT40’s carbureted 4.2-litre V8, the GT90 used a 6.0-litre V12. The engine was built by lopping two cylinders off of two 4.6-litre modular Ford V8s, and welding the resulting V6s together. The result was 720bhp and 895Nm of torque, a 0-62mph time of around three seconds and a top speed of 253mph.

The GT90’s exhaust used to get so hot that it would melt the surrounding body panels. To remedy the issue Ford’s engineers developed ceramic tiles, similar to those used on the Space Shuttle, to insulate the exhaust from the bodywork. 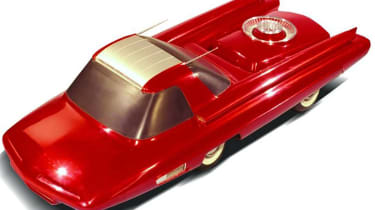 In the 1950s, nuclear power was all the rage, and it was predicted that it would quickly replace fossil fuels as the dominant energy source. Ford wanted to capitalise on this prediction, and built the Nucleon prototype; a nuclear-powered car, driven by uranium fission.

Unsurprisingly, a production model was never built. The Nucleon was only ever produced in scale, as a means of testing the theory of atomic-powered automobiles. The twin booms in the “bed” of the Nucleon were supposed to house a nuclear reactor, fuel and shielding. The reactor would be used to heat water to power a steam engine, which would then drive the wheels.

Supposedly, the Nucleon would cover 5,000 miles before refueling. This would take place in “recharging” stations and involved removing the entire reactor/shielding/steam engine assembly, and replacing them with fresh units. During this process, Ford envisioned it would provide its customers with a choice of reactors tailored towards the owner’s driving style, offering a fuel-efficient model or a high-performance model.