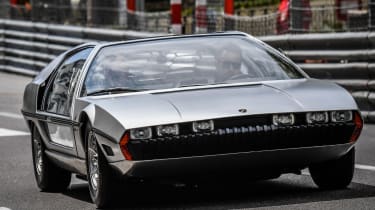 In 1967, Ferrucio Lamborghini was looking to expand his model line-up, wanting a true four-seat sports car to join the two-seat Miura and two-plus-two 400GT. So, he commissioned the famous Italian styling house Bertone, headed at the time by Marcello Gandini, to design him one.

The Marzal was the result. Built on an extended version of the Miura’s chassis, this wedge-shaped icon featured two huge, all-glass gull-wing doors which allowed access for front and rear passengers, along with a set of honeycombed rear louvres.

It was powered by a 2.0-litre straight-six, which was in essence a Lamborghini 4.0-litre V12 that had been sawn down the middle. Fed by three side-draught Weber carburetors, the Marzal had a power output of around 175bhp, and received critical acclaim from the Italian auto magazine Quattroruote due to its “lively” nature. 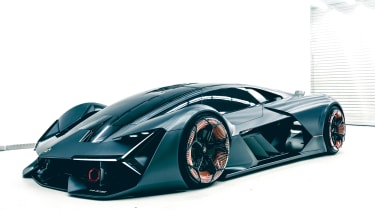 Lamborghini is quite possibly the undisputed king of making far out concept cars that are as impractical as they are astounding. The list of wild Lambo concepts is endless with a new one being unveiled seemingly every year. Take this, the Lamborghini Terzo Millennio, as a prime example. Built in partnership with the Massachusetts Institute of Technology, this concept is what Lamborghini believe their supercars will look like in the third millennium (hence the name, Terzo Millennio).

Although this is an electric concept, this is an electric car like no other. Instead of traditional batteries, the Terzo Millennio uses electric supercapacitators to give it extra power with fewer drawbacks compared to traditional battery-powered EV's. Other futuristic tech featured include a ‘self healing’ carbon fibre body and a body shell that gathers and stores energy. All of this technology is, current, out of reach but Lamborghini believe one day it could become a reality.

Then there are those science fiction looks, which still mark it out as being a Lamborghini. The designers had more freedom to work with thanks to the lack of an internal combustion engine. Extreme angles and lines coupled with those glowing orange supercapacitators in each wheel help give the Terzo Millennio an incredibly futuristic look. 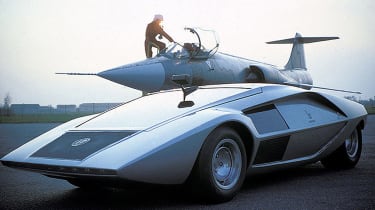 This is the concept which spawned the legendary Stratos. Built by the Italian styling house Bertone, and powered by Lancia’s V4 engine, it was designed to be a replacement for the aging Lancia Fulvia, tasked with reasserting the company’s dominance in rallying.

The project almost didn’t come to fruition. It was built in secrecy by Bertone in a bid to win Lancia’s affection as the firm preferred the rival Italian styling house, Pininfarina, at the time. It was unveiled to Lancia shortly before its public debut at the 1970 Turin Motor Show and, as luck would have it, Lancia approved.

To secure production, however, Bertone would have to jump over a final hurdle. In 1971, Ugo Gobbato, the chairman of Lancia, asked to see the Zero. So, Bertone personally drove the car to the headquarters of the Lancia works racing team, parked it in the forecourt of the garage and exited via its hinged windscreen to a crowd of stunned Lancia staff. Bertone was rapidly contracted by Lancia to build a practical rally prototype, which became the Stratos. 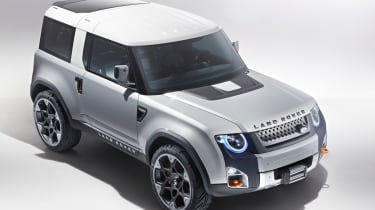 Back in 2011, Land Rover chose the Frankfurt Motor Show as its preferred launching ground for the DC100, the concept car that many people took to signal the imminent replacement of the Land Rover Defender. In the event, the new Defender wasn’t quite as imminent as many people thought and it wasn’t until 2018 that we even saw spy shots of the production car in development.

What the DC100 did do is stoke up the anticipation for a new Land Rover utility vehicle that retained the essential off-road DNA of its forebear but brought the model line into the modern era in terms of comfort, refinement and technology. The concept, overseen by Land Rover design boss Gerry McGovern, combined the Defender’s tough, upright stance with its essential off-road accoutrements. It was even followed up at the same Frankfurt show by the less convincing DC100 Sport concept, a convertible version that foreshadowed the Range Rover Evoque Convertible. 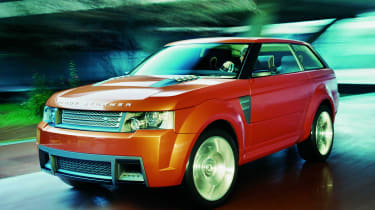 While Land Rover has always been known for its sensible, luxurious, and capable mud pluggers, in 2004 its designers really let their hair down with the outrageous 180mph Range Stormer. Complete with a supercharged V8, Lambo-style scissor doors, and laminated plywood seats, it was like no other SUV we’ve seen before or since.

While the Range Stormer was clearly never intended for production, it did set the tone for the much more mundane Range Rover Sport which entered production a year later. Thankfully, the wooden seats were ditched but that glorious V8 did make it into some top spec models. 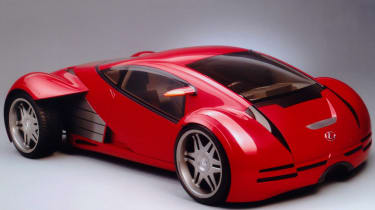 When Hollywood director and serial Lexus owner Steven Spielberg was making his 2002 blockbuster Minority Report, he wanted the most futuristic car possible. With the film set in 2054, he asked Lexus to build him a car from that year and they certainly didn’t disappoint. 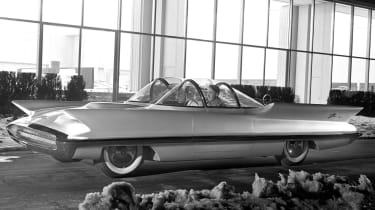 Designed by Ford’s lead stylists, Bill Schmidt and John Najjar, and hand-built by the Italian styling house Ghia, the Futura was primarily a styling exercise, intended to drum up some publicity for both Lincoln and parent company Ford, and provide a rough indication of the two brands' future design plans.

It was innovative for its time, featuring a double clear-plastic canopy, hooded headlights and large tail-fins. Unlike many show cars, it was drivable, too, fitted with a 6.0-litre V8 and three-speed Borg-Warner automatic sourced from the Lincoln Continental of the day. It produced around 300bhp and 545Nm of torque.

The Futura performed well as a show car, gaining plenty of publicity in both televised and cinematic media as well as merchandise - it sold well as a model kit and die-cast toy.

However, its most popular appearance was in the 1960s TV series, Batman. Famous Hollywood car stylist Dean Jeffries was approached by 20th Century Fox to produce a car for the series’ hero, and he thought the Futura was a good place to start.

He gave the concept a new set of alloys and a fresh paint job, then outfitted it with a series of ‘bat-gadgets’, creating the Batmobile. The project was completed in three weeks, for the sum of $30,000.