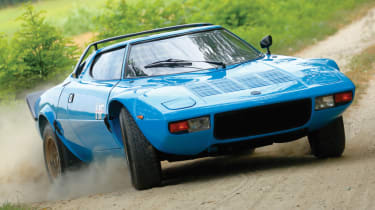 What's cooler than building a car that looks like a concept car to go rallying in? Not much, and that's exactly what Lancia did when it introduced the Stratos. It was the replacement for the successful Fulvia HF, but rather than evolve that front-engine, front-drive coupe, Lancia went mad and produced a stunning wedge of a car with a mid-mounted engine sourced from Ferrari. Can you think of anything cooler than something as radical as the Stratos storming down a forest track, flames spitting from its exhaust? That's what makes this a cool car.

The Stratos name originally appeared on a Lancia concept car seen in 1970, but the only thing that car and the rally Stratos have in common is the fact they were both designed by Marcello Gandini, the head designer at Bertone. The rally machine was preceded by the Stratos HF concept of 1971. This previewed the new car's radical shape and really stood out, and not just because it was painted fluorescent orange. Its wedge-shaped design and tiny cockpit area with next to no rearward visibility meant it looked like nothing else, and definitely not like a rally car.

However, that was the purpose of the Stratos, and to underline the point Lancia fitted it with the 2.4-litre V6 from the Ferrari Dino. This made 190bhp in 'Stradale' roadgoing spec, and Lancia was scheduled to build 500 cars to meet rallying regulations of the time. 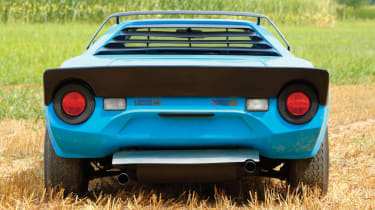 However, changes to the rules meant that only 492 were eventually made. Later cars came with a more powerful engine with 24-valve heads, compared to the original car's 12-valve configuration, and packed 320bhp. Combine this power with the car's lightweight and short wheelbase, and the Stratos proved nimble, if not a little twitchy at the limit of its capabilities.

The Lancia Stratos was one of the first cars to be built specifically to be competitive in rallying, and came almost a decade before the notorious Group B era. And it proved to be hugely successful, too, winning the World Rally Championship three years in a row from 1974-1976, and it was still winning rallies in the early 1980s. The rule makers tried to peg the Stratos back by limiting its performance, but the road car had a kerb weight under a tonne, and the rally cars were lighter still. 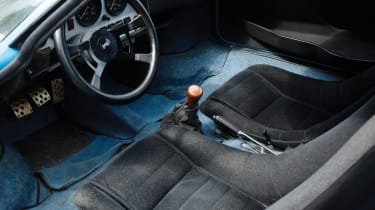 With such little weight for that Dino V6 to push along, it remained a competitive car for many years. Lancia even converted two examples for endurance racing by strapping a big turbo to the engine to break the 500bhp barrier and fitting massive wings, although neither car was very successful.

The Stratos has gone down in history as the radical rally car, but it set the template for Lancia's next forays into the world of rallying. The Lancia Rally 037 followed it in 1982 with a similar mid-engine, rear-drive layout, although it replaced the V6 with a turbo four. Then the wild Delta S4 added four-wheel drive to the mix, a turbo and supercharged engine and bodywork that was barely recognisable from the road-going Delta.