The most beautiful car ever made? Perhaps, but the Jaguar E-Type is certainly one of the coolest 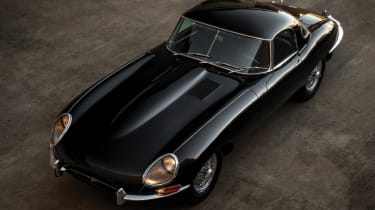 If Enzo Ferrari says that your car is 'the most beautiful car ever made' then you must be doing something right. That was his remark when he saw the Jaguar E-Type at the 1961 Geneva Motor Show, which is where Jaguar revealed its new sports car for the first time. The Malcolm Sayer-penned design is as distinctive today as it was when the E-Type was first revealed, with the curved nose, long bonnet and taut rear end giving it a unique look that is clearly as cool as sports cars get.

The E-Type name was a continuation from the C-Type and D-Type racing cars that won the Le Mans 24 Hours in the 1950s, and it shared plenty of technology with the latter of these. A monocoque construction, with the body and engine bolted directly to the frame, disc brakes, fully independent suspension and direct rack-and-pinion steering was all taken from the D-Type, and set new standards for race car technology on the road.

Even better was the use of a 3.8-litre version of Jag's potent XK straight-six engine. This 265bhp unit gave the E-Type a claimed top speed of 150mph, but while this was verified by magazines of the time, the cars tested had been gently fettled by Jag to achieve these speeds. The introduction of a 4.2-litre E-Type in 1964 gave better mid-range torque while still maintaining a 150mph top speed. 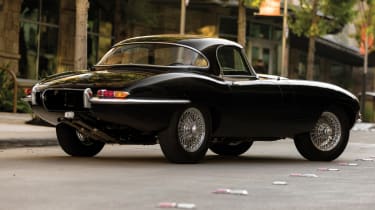 What was more appealing about the E-Type was its sheer value for money. It came in at a price that was a fraction of the Ferraris and Aston Martins of the time that had similar performance, and as a result these makers had to rethink their strategies when it came to the kind of performance-per-pound that they offered.

The E-Type was produced for 14 years in total, but while the 1961 original wowed the crowds, some would argue that things went downhill from there. The smooth lines of the original Series 1 E-Type were slightly spoiled by the removal of the headlight covers - an essential update to improve visibility at night - while the arrival of the Series 2 in 1968 saw the E-Type strangulated by US emissions laws. The straight-six had its power cut by 20bhp, while some of the interior trim was downgraded, too. The arrival of a 2+2 also saw a longer body used that didn't look quite as elegant as its two-seater counterparts.

Then in 1971, the Series 3 transformed the E-Type from sports car to grand tourer, with the addition of Jag's mammoth 5.3-litre V12. This car had a quoted top speed of 135mph, but it also had awkward looks, with big bumpers and alloy wheels replacing the wire wheels on earlier cars. 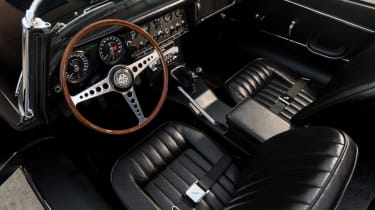 Still, rewind to the original E, and you do have a seriously cool car. Even cooler are the lightweight E-Type Low-Drag coupes. These competition-focused models used plenty of aluminium in their construction, and were a logical evolution of the D-Type. While they didn't win Le Mans, the 12 cars built did reasonably well with private owners. And Jag saw fit to reintroduce the lightweight in 2014, with the intention to build the six remaining cars that were supposed to be built alongside the first dozen. While they may lack the heritage of the originals, the 'new' lightweights will set you back well over £1million - if you can find one in the first place.