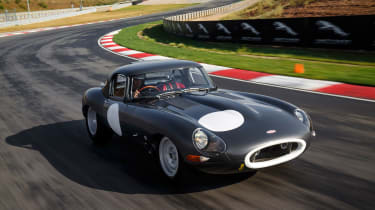 Creating the six ‘missing’ Lightweight Jaguar E-Types is a fascinating idea and the passion, expertise and attention to detail of these cars is simply jaw-dropping. Forget the controversy surrounding whether these amazing creations are ‘real Lightweights’… The FIA is happy to let them race against period competition, the customers are delighted to pay seven figures to own one and we felt privileged to drive ‘Car One’.

I’m in a brand new car, eyes streaming from petrol fumes that are seeping into the cabin, sweating from the heat soak of the big straight-six engine up ahead and through the sheer effort of steering it, changing gear while trying to remember a long forgotten ‘double-declutch’ technique and from squeezing hard on the unassisted brakes.

There’s no ABS, no traction control, the windows are operated by strange twirly handles… And yet this is one of the most expensive new cars you could hope to buy. Officially ‘well into seven figures’. And I’m smiling. Beaming. Laughing. This is one of six new Lightweight Jaguar E-Types being created by Jaguar Heritage and it is fabulous.

The original Lightweight or ‘Special GT E-Type’ project was developed in ’63 and designed for international GT racing. In place of the steel body of a normal E-Type was a hand-crafted aluminium monocoque, the 3.8-litre straight-six ‘XK’ engine was dry-sumped and rated at over 300bhp and every detail was honed for racing. 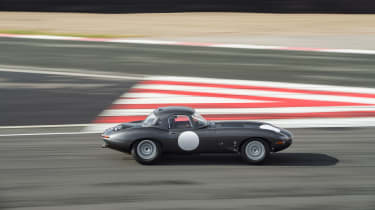 The Lightweight E-Type weighed just 960kg and for a short period it was a seriously competitive racecar. Jaguar intended to build 18 of these cars but in the end just 12 were produced between ’63-’64. The six further chassis numbers assigned to the project remained unused, laying blank in Jaguar’s old production ledgers. So when Jaguar Land Rover’s new ‘Special Operations’ division were looking for a way to launch Jaguar Heritage – a new part of the business that will undertake restorations and supply parts and servicing for older Jaguars – the idea to build those ‘missing’ Lightweights started to take shape.

It’s been a painstaking process, mainly because engineering blueprints and records in general weren’t quite so meticulous back in ’63 and because each of the original twelve was unique. Lessons learnt during the build and from the racetrack were implemented in the next… So it took months of research, visits, photographs and digital scans of the original cars and plenty of soul-searching to hit upon the final specification. 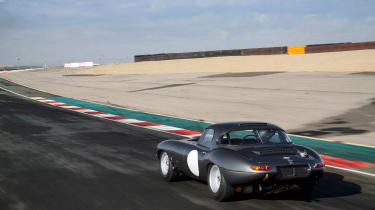 Built using the same riveting and spot-welding technique (the welds are even applied in the same pattern), the new Lightweights are hand built at Jaguar’s Whitley technical centre and then finished at Browns Lane, just yards from where the original cars would have been produced. Of course the level of fit and finish is way, way beyond the original cars.

Climbing through the narrow doors and folding yourself behind the large, thin-rimmed wooden steering wheel immediately gets your heart thumping. The view over that long louvered bonnet is stunning and the car feels absolutely tiny. Car One is running the authentic and primitive fuel injection system (carbs are an option, just as in ’63) and I’m warned the accelerator is basically either ‘on’ or ‘off’. Great. Sure enough we cough and howl and cough and howl out of the pit lane onto a tight little race circuit. 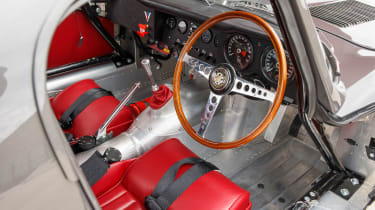 The next minutes are a blur of exertion and occasional clumsiness and then magical moments when the Lightweight is flying and I’m in tune with it. The unassisted steering is heavy at low speeds but not tortuously so and as soon as you’re rolling the weighting and level of communication is gorgeous.

The engine, producing around 340bhp, roars and rattles and howls like a living, breathing animal and the four-speed manual ‘box is actually very sweet indeed. On Dunlop cross-ply racing tyres the Lightweight has plenty of grip but quickly wants to settle into one of those four-wheel drifts you always dream about… It’s fantastically easy to drive and although you’re incredibly busy and wholly immersed in the experience there are no surprises. You get out what you put in and when you really find the sweet spot the rewards are out of this world. Performance and technology have moved on since ’63 but in terms of excitement and involvement it doesn’t get any better than this.