The Jaguar Project 7 takes the F-Type package to another level of performance, exclusivity and driver enjoyment 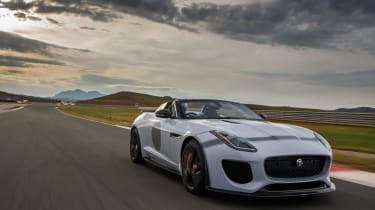 Jaguar’s Project 7 builds on the already highly-entertaining, charismatic F-Type R Convertible and adds a new agility, greater traction and a big helping of drama tinged with raw excitement. It’s most definitely not a super-focussed Porsche GT3 rival, but by treading its own path it exudes confidence and gives a tantalising taste of what a Jaguar F Type SVR might be.

It wasn’t so long ago that if Jaguar tried to evoke the spirit of the glorious old D-Type by sticking a few styling cues and a stripe or two onto their existing sportscar, it would have seemed like the very worst sort of desperation. But this is the new Jaguar and the memories of the bad old days are fading fast enough that borrowing some magic from the good old days seems only right and fitting. So this is the Jaguar Project 7, named to reference Jaguar’s seven victories at Le Mans. It’s a product of Jaguar’s new Special Vehicle Operations (SVO) department and just 250 will be built. Looks good, doesn’t it?

The Jaguar Project 7 is based on the F-Type R Convertible, sprinkled with evocative styling tricks, massaged for a little more power and made lighter, too. It’s also got vastly improved aerodynamic efficiency, the suspension has been revised to provide much greater responsiveness and - a hint at its focus on driving thrills - it’s fitted as standard with massive carbon ceramic brakes. The Project 7 costs circa £135,000 and 80 of the sold-out 250 run have found homes in the UK. 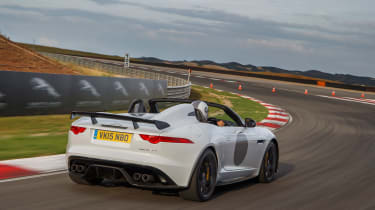 So the basics are simple and mouth-watering. The Project 7 has a 5.0-litre supercharged V8 good for 567bhp and 700Nm. It’s rear-drive only and the 8-speed ‘Quickshift’ automatic gearbox has a bespoke tune for faster response and snappier shifts. Weight is cut by 45kg thanks to lightweight seats, losing the roof mechanism (there is a manually-fitted shower cap arrangement but Project 7 is designed for sunny days) and those carbon-ceramic brakes. It’s still 1,620kg, though.

It would be easy for the Jaguar Project 7 to become a pastiche but in fact it looks beautifully resolved: Aggressive and modern but with just a twist of D-Type. It’s hard not to be giddy when you approach it and positively impossible not to beam with boyish excitement when the big V8 booms and crackles into life. What a noise.

Initially the Project 7 feels surprisingly supple, refined and, well, familiar. I’d expected more edge, a rawer experience, but the F-Type DNA bursts through and the idea of covering a big distance in the Project 7 is an enticing prospect. 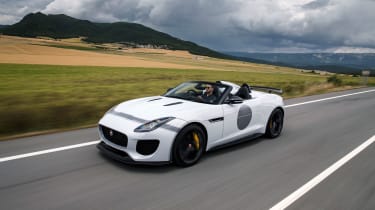 It still feels as much GT as sports car. The ride might struggle a little more on UK roads but on pristine Spanish tarmac the Project 7 simply flows. However, as the road tightens the greater agility, mid-corner grip and much-improved traction is tangible. Everything is ramped-up from the F-Type and the result is a greater connection with the surface, incredible turn-in accuracy but still a poise and innate balance.

If there’s a disappointment it’s that the light, fast steering never really gives much information about what’s going on underneath those bespoke 20-inch Continental ContiForceContact tyres. Fortunately it’s not a deadly flaw because as you do creep closer to Project 7’s limits you find a car of real balance.

On the circuit it’s superb fun. It still feels a little heavy and if you try to bully the car around then it slips into turn-in understeer and masses of tyre-smoking oversteer, but such is the balance that you can tread a fine line where the Project 7 is slipping just a little but completely under your control. Don’t expect the searing response and grip of a 911 GT3, but clearly this is a step on from the F-Type R Convertible. 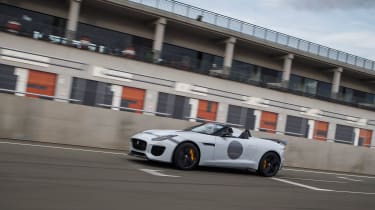 There’s so much to love about this car. The noise, the performance, the newfound agility and perhaps more than anything else, the sheer sense of fun it offers. Despite deep engineering work including new suspension knuckles and much more aggressive suspension settings, Project 7 can’t completely hide its bulk on track, nor offer the pure dynamism of, say, a similarly priced 911 Turbo. But for its rarity, styling and charisma you can only conclude it’s a bit of a bargain.