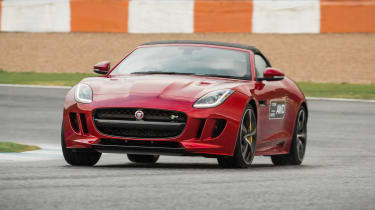 Adding all-wheel drive to the Jaguar F-Type has made a fast, responsive sports car even faster and more responsive. The clever folk at Jag have ensured the car is now more engaging and accessible, while the new steering and other model year 2016 updates make the F-Type all the more special. Is adding all-wheel drive worth spending an extra £4,850? We reckon it’s money well spent.

Jaguar refers to the F-Type as the embodiment of Jaguar DNA. Now that DNA includes four-wheel drive and a few more dynamic tweaks for the sensational-looking sports car.

Although we’re just in to 2015, these early all-wheel-drive cars are described as 2016 model-year versions, which also sees electric power-steering added for the first time, a new Sports Design Pack (read bodykit) and, at long last, an upgrade for the woefully outdated infotainment system, which now has downloadable apps. How very 2016.

The old V8 S Convertible F-Type has fallen by the wayside as part of the range revamp, replaced by a soft-top version of the F-Type R with a 543bhp V8 under the bonnet, which we got to test at the famous Estoril racing circuit in Portugal. 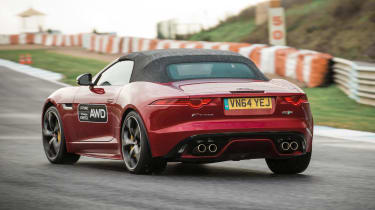 Choosing AWD adds £4,850 to the list price, but drops the 0-60mph time of an F-Type R by just one-tenth of a second. It has more of an effect on V6 supercharged models, knocking four-tenths off the sprint for the same cost.

But this is about more than just numbers – the AWD system flatters drivers, letting you play the hooligan by flooring the throttle coming out of a tight bend without the worry of having to catch a wey hey-inducing tailslide.

There’s still a little bit of movement at the back, but the cleverness of Jaguar’s Intelligent Driveline Dynamics working with the Dynamic Stability Control anticipates the rear wheels losing grip and transfers torque to the front wheels.

Even tastier drivers will revel in the extra grip, allowing you to eke out faster lap times on a circuit, while the new electric power-steering system offers bags of feedback and lightning quick reactions (and saves a bit of fuel, too). And, of course, all-wheel drive gives you more confidence in everyday driving, especially in the damp winter months. 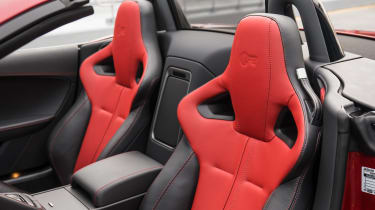 Torque Vectoring by braking is standard on all F-Types now, braking the front wheels to sharpen turn-in and reduce the vague possibility of understeer that there might have been – this is one seriously sharp-handling sports car and better than ever.

And at long last it has a touchscreen system that’s befitting of a modern sports car, complete with InControl apps for parking, podcasts and more. You’ll spot AWD F-Types by bigger front vents and beefier bonnet bulge, plus the smile on the driver’s face.