British and unbeatable off-road, the rough and ready Land Rover is an institution of cool 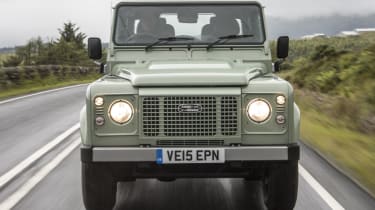 Few cars have survived for as long as the original Land Rover did. While the last Defender is what we've named it in the list, we're counting the entire heritage of the car, all the way back to the 1948 original. In terms of history and longevity, only the Jeep and Mercedes G-Wagen can compete, but the former has evolved beyond recognition from the Willys original, while the latter is now a fashion trinket for the rich. In comparison, the Land Rover is fairly unique in the breadth of its abilities.

That's what makes it especially cool, because the Land Rover looks equally at home on the farm or in the city. Defenders have been used for all kinds of jobs, from remote Scottish farms to Home Counties building sites, as airport as fire engines, to tow boats for the coastguard and even in battle. The Defender really is the Swiss Army knife of utilitarian transportation.

The simplicity of the Defender is one of its plus points. There are no luxuries here, just seats, a heater, maybe a radio, and windows to keep the weather off, but that's just about it. Sure, you can spec up a Defender at an aftermarket conversion company so it's as plush as a G-Wagen, but you can be just as smart cruising the King's Road in a standard short-wheelbase XS model if you want to be seen. 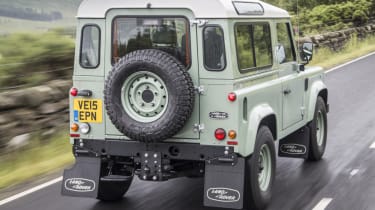 What people won't be aware of is exactly how much of a struggle it is to drive a Defender. While they may look good from the outside, it's a different experience altogether from behind the wheel. Heavy steering, a massive turning circle, a cramped driving position, wooden brakes, a heavy clutch and relaxed acceleration mean the Defender is from another era in terms of driving. Still, some people will enjoy the challenge of driving one, even more so if they take it off-road.

The Defender is next to unstoppable in the rough. The short wheelbase version is the one to go for, and its short overhangs and narrow body mean it'll get well off the beaten track without getting stuck. And there are plenty of aftermarket specialists who can kit a Defender out in all sorts of equipment to make it even more even capable when the going gets muddy. 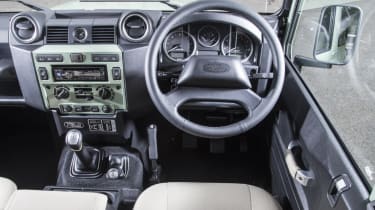 If you're not a fan of the new Defender's contemporary, refined design, you might be tempted to buy a Defender and our advice is to go for as late a model as possible. The best diesel engine is the last one, which is the 2.2-litre Duratorq from the Ford Transit. It's not outstandingly powerful, but is good enough, and is the most refined engine, too. If you can afford it, we'd recommend one of the limited edition final run cars, too. The Heritage Edition harks back to the 1948 original with its green paint and tan interior, while the Adventure gets a host of off-road upgrades. The Autobiography is the highest spec Defender there has ever been, although with a list price of £61,000, it was also the most expensive.